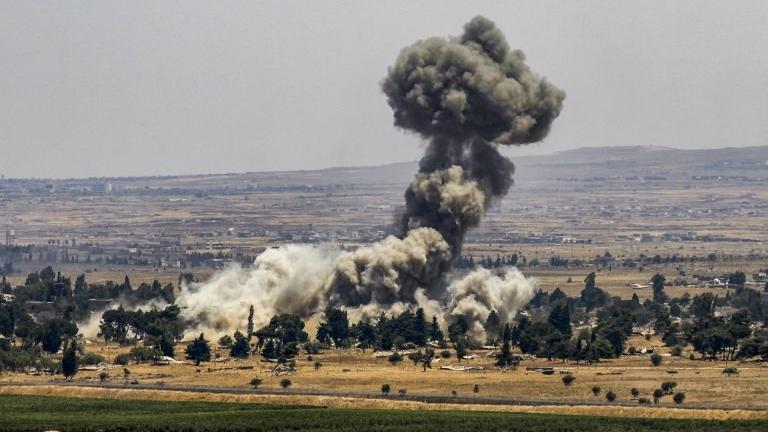 In this July 22, 2018, photo, from the Israeli-annexed Golan Heights shows a smoke plume rising across the border in Quneitra in southwestern Syria. Syrian state television said on July 22, 2018, that an Israeli air strike had hit a military post in the city of Misyaf in Syria's Hama province but caused only material damage. (JALAA MAREY / AFP)

DAMASCUS, Syria — Israeli jets flying high over Lebanon struck at targets inside Syria on Tuesday, Syrian state media reported, in a rare daytime raid that killed at least one person.

Syria's SANA state news agency said the country's air defenses shot down five missiles, adding that one person was killed and 12 others were wounded

Syria's SANA state news agency said the country's air defenses shot down five missiles, adding that one person was killed and 12 others were wounded.

It reported strikes on the Wadi Ayoun area in the western Hama province and on the town of Baniyas in the coastal Tartous province.

The Britain-based Syrian Observatory for Human Rights said the jets targeted military installations belonging to Iran, a key ally of the Syrian government.

Israel is believed to be behind a string of strikes targeting government and allied military installations in Syria, in order to disrupt weapons transfers between its archenemies Iran and the Lebanese militant group Hezbollah. The Israeli government rarely acknowledges the attacks, and such strikes usually take place late at night.

The Syrian government accused Israel of striking a weapons research facility in Masyaf, near Wadi Ayoun, in July. The attack killed a top military scientist.

An Israeli military official said Tuesday that Israel has struck over 200 Iranian targets in Syria over the past 18 months. The official, speaking on condition of anonymity under military guidelines, said the targets were connected to Iran's elite Al-Quds force and include air force components, support infrastructure, and weapons storage and manufacturing facilities.

The official said Tuesday's alleged airstrikes were not included in the tally. He would not confirm Israel was behind those strikes, and did not comment on them.

Elsewhere in Syria, at least eight people were killed in airstrikes in the northern Idlib province, where Syria's rebels are holed up in their last major bastion. Those strikes were likely carried out by the Syrian government or its allies, which are preparing for a major offensive.

The Observatory blamed the strikes on Russia, which intervened in Syria's civil war in 2015 to support President Bashar Assad.

Government forces are amassing at the border with Idlib province, while Russia revealed last week it had positioned more than a dozen ships off the Syrian coast, raising fears of a wide-scale offensive that could mark the last major battle in the seven-year civil war.

US Ambassador to the United Nations Nikki Haley said Tuesday the Security Council will discuss the situation in Idlib on Friday morning. The US is currently the president of the council, the UN's top decision-making body.

The UN's special envoy to Syria, Staffan De Mistura, urged Russia and Turkey to reach a "soft solution" to avert an expected government offensive on the province.

Syria's government is determined to retake Idlib, which it says is being held hostage by terrorists. Russia and Iran, which also back the government, have adopted a similar position.

Turkey, which has financed and organized rebels in Idlib and keeps 12 military posts in the province, has been less clear about where it stands.

The leaders of Russia, Turkey, and Iran are slated to meet in Iran on Friday to discuss Syria. De Mistura said he heard from media reports that a campaign for Idlib could begin as early as the following Monday. It was not clear which reports he was referring to.

The envoy restated his offer to travel to Idlib to oversee humanitarian corridors so that civilians can shelter in safety if an offensive moves forward.

There are 2.9 million people presently in Idlib, according to UN estimates, including 1.4 million who have been displaced from their homes by fighting

There are 2.9 million people presently in Idlib, according to UN estimates, including 1.4 million who have been displaced from their homes by fighting. Hundreds of thousands of Syrians have sheltered in the province, away from the government, to escape military conscription or arrest.

De Mistura said he was "determined" to hold talks with high-level envoys from Turkey, Iran and Russia on Tuesday and Wednesday of next week. He also planned to meet with envoys from Egypt, France, Germany, Jordan, Saudi Arabia, the United Kingdom and the United States on Sept 14 to brief them on his efforts to launch a political process and help set up a committee that could revise Syria's constitution.

Separately, the White House warned that the US and its allies would "respond swiftly and appropriately" against the Syrian government if it uses chemical weapons in its assault.

The US has twice struck Syrian military installations in response to alleged poison gas attacks. The Syrian government denies ever using chemical weapons.

President Donald Trump on Monday sent a tweet warning the Syrian government and its allies against a "reckless attack" on Idlib, drawing fire from Moscow.

Russia says militants in Idlib target its own facilities in Syria and pose a terrorist threat.

Asked about Trump's tweet, Peskov said such warnings do not consider "the dangerous and negative potential" of the rebel-held enclave and show that the White House does not have a "comprehensive approach" to solving the Syria crisis.

Secretary of State Mike Pompeo, who has spoken to the foreign ministers of Russia and Turkey about the impending operation in recent days, repeated the Trump administration's warning for Syria and its allies to tread carefully around Idlib. He acknowledged that "terrorists" are present in the city, but stressed that an all-out assault is unwise, notably because it would badly affect civilians.

"The humanitarian crisis that could be here is different," he told reporters on his plane accompanying him to Pakistan and India.

"Many of the people who fled these other de-escalation zones fled to this location. There's no place for these people to go," he said.