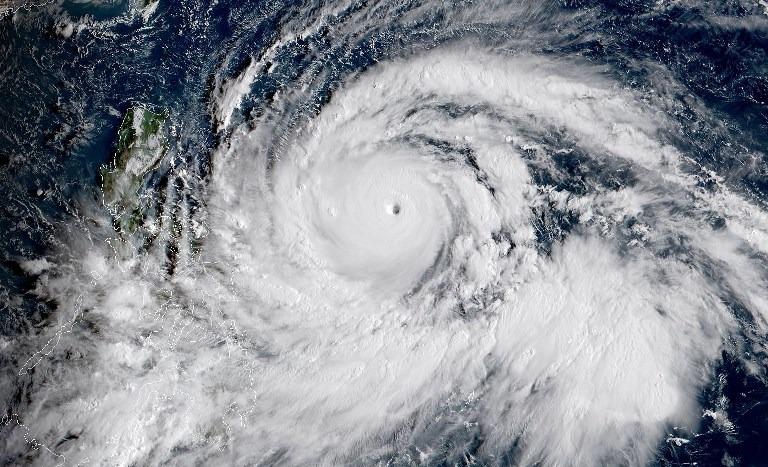 HONG KONG - Hong Kong is preparing for a super typhoon that is predicted to land this weekend and may be the strongest ever in the city since records began.

The upcoming Super Typhoon Mangkhut will be the second typhoon hitting Hong Kong this week. The Hong Kong Observatory issued typhoon signal No. 3 on Wednesday as winds strengthened with Tropical Storm Barijat.

All the warning signals related to Tropical Storm Barijat were canceled early Thursday, but officials kept warning of a much greater threat from Mangkhut.

Mangkhut is predicted to be closest to Hong Kong on Sunday and remain its intensity at the level of a super typhoon, bringing adverse weather to the city

It is forecast to be more powerful than all the super typhoons Hong Kong has experienced in decades, including the notorious 1962 Super Typhoon Wanda that left heavy casualties, as well as Super Typhoon Hato that triggered the highest-level typhoon warning signal last year.

The HKSAR government's Secretary for Security John Lee directed all emergency response departments to have their deployment and emergency response plans ready for the possible threats, and reminded that all departments should take timely precautions and maintain close liaison and co-ordination while the Security Bureau would closely monitor the situation.

The HKSAR government said it will convene another inter-departmental meeting on Friday to evaluate the latest situation.

This screenshot taken from the official website of the Hong Kong Observatory shows the forecast tracks of Mangkhut and Barijat as of 8 am, Sept 13, 2018 (HKT).

According to the latest forecast by the Hong Kong Observatory, Mangkhut, with the maximum sustained wind near center at the speed of 240 km/h, will enter the South China Sea on Saturday.

It is predicted to be closest to Hong Kong on Sunday and remain its intensity at the level of a super typhoon, bringing adverse weather to the city.

Although there are still uncertainties in its track, Mangkhut is expected to bring adverse weather to Hong Kong, with frequent squalls and heavy rain, according to the present forecast track

The Hong Kong Observatory has been issuing special weather tips about Super Typhoon Mangkhut since Tuesday, warning that it may issue a No. 8 typhoon signal on Sunday.

"As Mangkhut has a large circulation with intense winds, it will pose a considerable threat to the coast of Guangdong. Although there are still uncertainties in its track, Mangkhut is expected to bring adverse weather to Hong Kong, with frequent squalls and heavy rain, according to the present forecast track," senior scientific officer at the observatory Lam Ching-chi said, urging people to prepare for Mangkhut's arrival.

"Seas will be very rough with swells, together with storm surges. Low-lying areas may have flooding or backflow of sea water," Lam said.

In its most updated tips, the observatory advised the public to be fully prepared and to complete all precautionary measures in the next few days. It also reminded citizens of continuing to stay tuned to the latest information on Mangkhut issued by the observatory.

In the neighboring Macao Special Administrative Region, local government has stepped up its preparation efforts in response to the anticipated arrival of Mangkhut.

The Marine and Water Bureau warned all ports and ships should be alert about coming storm and operate with caution.

The Civic and Municipal Affairs Bureau has started removing lanterns and decorations made for Mid-Autumn Festival, which falls on Sept 24 this year.

The Secretary for Security Wong Sio Chak urged a 29-member civil protection management team and other public departments to pay particular attention to preparations in a meeting held at Macao Civil Protection Operations Center on Wednesday to discuss arrangements for the typhoons.

Wong added that should the situation require it, the SAR government could ask the central government for assistance from the People's Liberation Army Macao Garrison for the maintenance of social order and relief work.