By Hong Xiao in New York 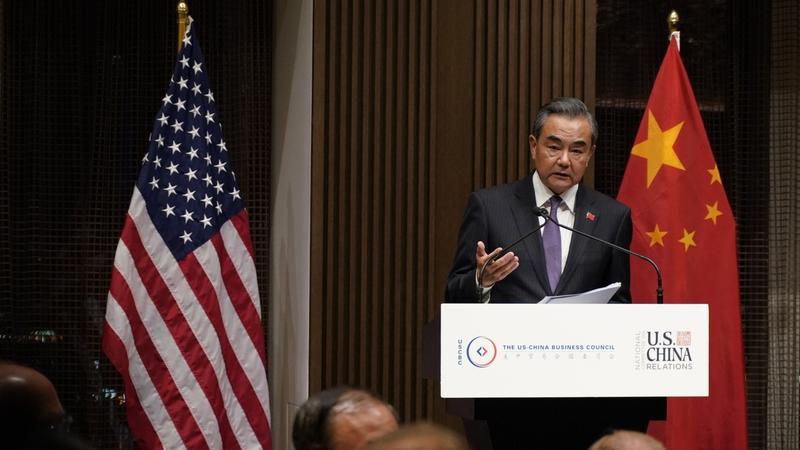 "One features calm seas and broad prospects, and the other is churning waters and raging waves," he said.

Wang said that in the past four decades, China-US relations have weathered many twists and turns but "steadily moved forward with progress beyond even the boldest imagination"

Wang spoke at a reception co-hosted by the National Committee on US-China Relations and the US-China Business Council. He is in New York to attend the 74th session of the United Nations General Assembly.

Wang said mutually beneficial cooperation is the only right option for China and the US.

"There is a claim in the United States that the country has been 'ripped off' in its cooperation with China. Is that really so? Of course not," Wang said.

Wang said that in the past four decades, China-US relations have weathered many twists and turns but "steadily moved forward with progress beyond even the boldest imagination", he said.

"On the other hand, however, China-US relations today have once again come to a crossroads," he added, saying that "some people are using every means to depict China as a major adversary, marketing their prophecy that the relationship is doomed to fall into the Thucydides Trap, the 'clash of civilizations' trap, and even clamoring for a full 'decoupling' with China." The Thucydides Trap refers to a clash between a rising power and an established power that escalates toward war.

Wang said that over four decades, the China-US trade in goods surged by 252 times. A US-China Business Council report found that between 2009 and 2018, US exports to China alone supported more than 1.1 million jobs in the US.

Ninety-seven percent of US companies surveyed reported profits from doing business with China, and trade with China has saved US families US$850 a year on average, the report said.

Wang said he thinks economic globalization, as the trend of the times, should not and cannot be held back. And issues between nations should be addressed by enhancing global governance through equal dialogue and consultation.

He said trade frictions have inflicted losses on both countries. He cited the Federal Reserve Bank of New York, which estimated that due to additional tariffs imposed on the US$250 billion of Chinese exports in 2018, US consumers would have to spend an extra US$52.8 billion every year, or an average of $414 for each US family.

"Given the size of our economies and the level of interdependence, the so-called decoupling, or shutting the door to each other, is just like an attempt to build castles in the air. It is neither sensible nor realistic," he said.

China, the world's second-largest importer of goods and services, has the world's biggest and most promising market, with the largest and fastest-growing middle-income population, he said.

"Each of the sides will believe in the validity of their points of view, but the peace of the world cannot be achieved without a willingness to consider the point of view of other parties," Kissinger said.