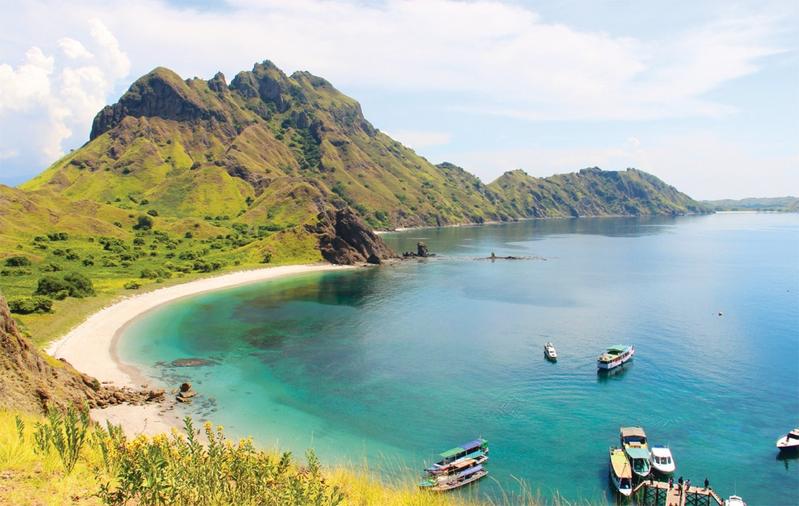 A trip to Indonesia is often unforgettable and full of surprises. The Southeast Asian archipelago, composed of 17,500 islands that stretch from the western tip of Sumatra to the eastern edge of Papua, often attracts adventure lovers, intrepid surfers and sunseekers. Whether experiencing its unique wildlife, finding serenity at ancient temples or discovering its colorful marine life, Indonesia offers endless exploration.

Labuan Bajo may be less developed than Bali, but the infrastructure developments are a proof that this town is beginning to boom

Of all the Indonesian islands, Bali — at the westernmost end of the Lesser Sunda Islands — is the most popular tourist destination, known for its natural environment and panoramic landscapes.

In 2017, according to the Bali Government Tourism Office, total foreign tourist arrivals rose to 4.93 million, a 13.98 percent increase from 2016. Chinese visitors accounted for 24.32 percent, or 1.38 million, outperforming Australians.

But there is more to Indonesia than just Bali. From there, I flew an hour and a half to Labuan Bajo — a small, dusty town on the westernmost tip of Flores island and capital of the West Manggarai district in East Nusa Tenggara province. As one of the top 10 contenders for Indonesia’s ‘New Bali’, this up-and-coming tourist destination is an alternative to the overcrowded Kuta neighborhood.

Once a fishing village, Labuan Bajo’s charm lies in its magnificent harbor dotted with small islands. As I drove past them, my driver told me that residents there mostly make their living on water, so the bay is often filled with canoes of different sizes and motorized boats. Labuan Bajo is also a port town, so sailing vessels and trimarans can be seen afar.

Labuan Bajo may be less developed than Bali, but the infrastructure developments are a proof that this town is beginning to boom. The modern-designed Komodo Airport, inaugurated by Indonesian President Joko Widodo in December 2015, aims to improve passenger services, while two hospitals and more upscale hotels cater to tourists’ needs.

The town’s main happening area is Jalan Soekarno Hatta, where accommodation, restaurants and tour agencies can be found. Accommodation can range from simple ventilated wooden rooms to three-star hotels. Upscale ones, such as the five-star Plataran Komodo Beach Resort, are a 10- to 15-minute ride from downtown. 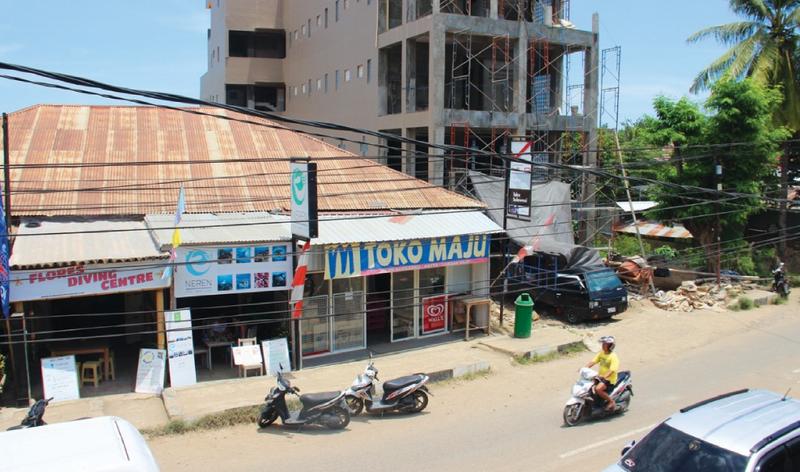 When it comes to local food, small eateries and stalls can be found everywhere. Warung Mama, a local restaurant set on stilts, is one of my favorites.

With ongoing construction and more hotels opening, Labuan Bajo is no doubt becoming a tourist destination. According to Agustinus Dula, regent of West Manggarai, the town received 278,000 foreign tourists between 2016 and 2017.

And from those figures, there were only 101 Chinese tourists. By ramping up its tourism efforts and working with other local organizations, Dula hopes to attract more tourists, especially Chinese, in the near future.

There is not much to see in town, but there are still several attractions that are a few hours’ drive from Labuan Bajo. One is the Istana Ular, a snake cave located 70 km east. Not for the faint-hearted, the attraction provides an opportunity to see snakes in their natural habitat.

The Komodo National Park includes three larger islands: Komodo (selected as one of the new seven wonders of nature), Rinca and Padar, as well as 26 smaller ones. And to go from one island to another, a speedboat is a must. My adventure started at Loh Buaya Komodo National Park on Rinca, which is an hour and a half speedboat ride from the four-star Laprima Hotel’s docking area.

At first, the idea of a national park had me thinking I would be exploring from the safety of a four-wheel-drive expedition vehicle. But I was wrong. Visitors, guided by park rangers, need to walk on a trail path to see Komodo dragons in the wild.

Accompanied by park rangers and Cecilia from Let’s Dive Komodo, I was ready to conquer my fear. Visiting the park to see these prehistoric lizards is a once-in-a-lifetime experience, but it can also be a frightening one. Well, at least for me. 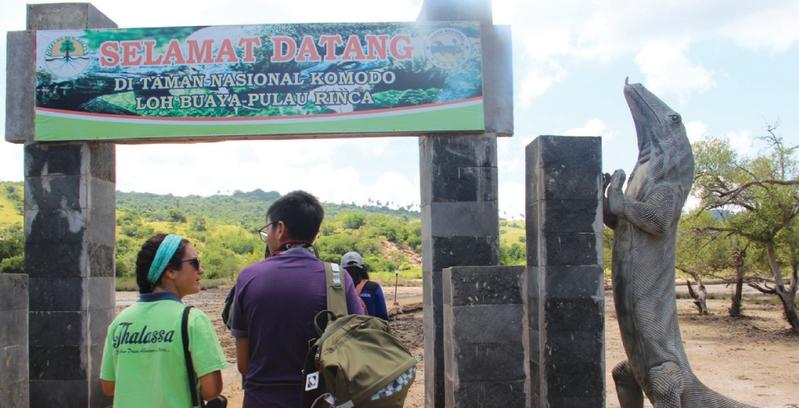 Truth be told, I was on my period when I visited, and since I didn’t want to miss the opportunity, I took the risk and joined a group, knowing the rangers were there to keep an extra eye on me.

Menstruating women or visitors who have an open wound are not recommended to go in, for fear that they could get attacked. Komodo dragons can smell blood from five kilometers away and they could mistake blood for dying animals.

They eat almost anything, including deer, pig, water buffalo and humans. Since they have poor eyesight and restricted hearing ability, they strongly rely on their sense of smell by using their long, forked tongues to sample the air.

“Look to your left and right because they (Komodo dragons) could be hiding,” said our guide Agus, one of the 36 rangers working at Rinca for six years. “The most important is to stay together and walk closely with us (rangers).”

Following Agus’ words, we formed two lines and started our one-hour journey. We first spotted two Komodo dragons — a 3-year-old lying in the sun and a 5-year-old hiding underneath a wooden house. Neither of them moved, though. We continued walking until we saw another wooden house and there, on one side, were six — all of them lying in the shade. 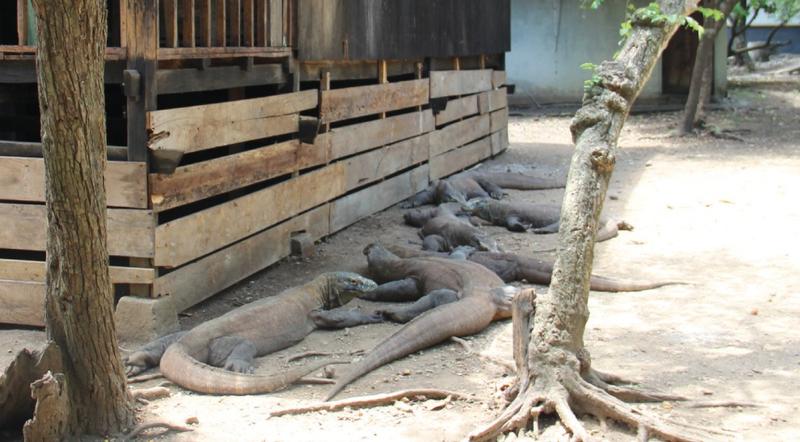 There are about 1,500 Komodo dragons that inhabit the island, according to Rinca’s police officer Abdul Rahman, who worked as a ranger for 30 years, so seeing six already gave us an opportunity to see how they interact with one another.

As one of them slowly moved and let out its forked tongue, fear instantly swept through me. For others, it was a glorious moment for photo and selfie opportunities.

Visitors — and even rangers — are advised not to get close to these venomous lizards when taking photos. They are speedy and their bite can expedite blood and send a victim into shock. In an incident last year, 68-year-old Loh Lee Aik from Singapore was attacked as he went close to take photos. He also did not have a guide, which is against the park’s regulations.

“Come on, it’s time to go,” Agus shouted, as one of the reptiles started walking on its hind legs. As I reached the trail’s end, passing through a forest-like setting where female Komodo dragons dig holes to safely keep their eggs, I finally let out a big sigh. Looking at the magnificent view of verdant hills and islets afar, I realized how thankful I was.

There were almost no Chinese tourists at the time of my visit to Komodo National Park, and instead there were Western tourists. According to Rahman, a total of 70,000 tourists arrived last year, and Germans accounted for 70 percent. But that is about to change: In May, Rahman said there will be about 100 Chinese tourists coming in daily, and he is hoping the number can increase.

Aside from Rinca, there are many other nearby islands to visit. Padar, the third-largest island in the Komodo National Park, is about 30 km from Labuan Bajo. The climb there may be a bit tough, but the breathtaking views of sandy white, pink and black beaches are definitely worth the effort. Other islands like Seraya and Kanawa also offer snorkeling and diving.

As I look back on my adventures at Labuan Bajo and its surrounding islands, I can say I had the most unforgettable time there.

Two days in Labuan Bajo may seem a bit rushed, but given the opportunity to see Komodo dragons and explore Indonesia’s natural wonders, it shows that Labuan Bajo has a lot of tourism potential to be Indonesia’s next Bali.