Should all vaping options be banned?

Hong Kong intends to ban e-cigarettes and other new alternatives to smoking. The tight control of tobacco has seen vaping promoted as a ‘less harmful’ substitute. Teens and young adult non-smokers, are targeted with sleek designs and cool flavors. Dara Wang finds the industry in turmoil and users of the product confused. 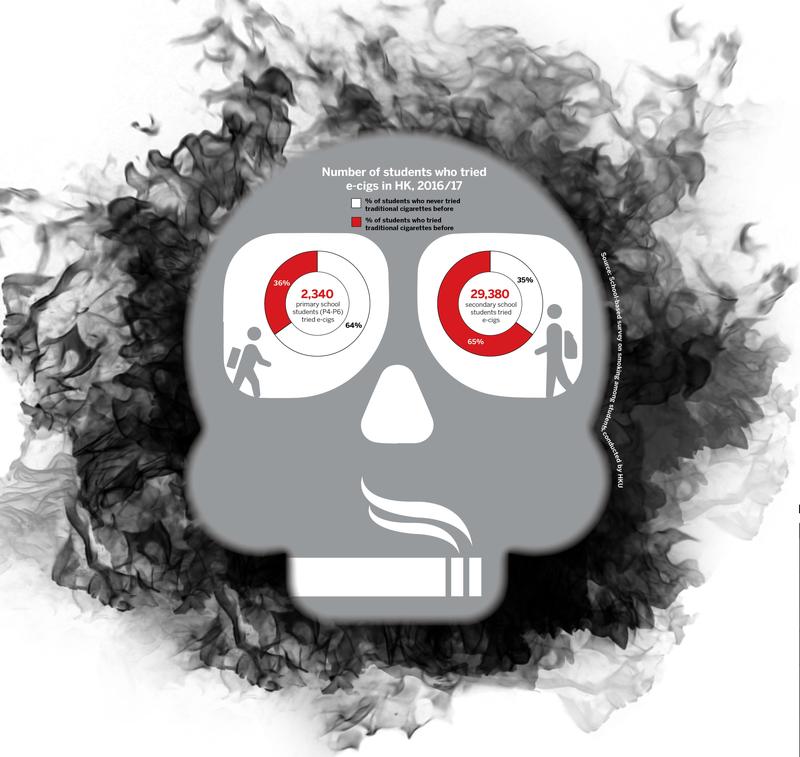 Chief Executive Carrie Lam Cheng Yuet-ngor’s Policy Address in October 2018 declared that e-cigs and smoking alternatives are harmful to health, have not proved effective in helping smokers quit, and could make potential addicts of juveniles. A bill to amend the Smoking Ordinance submiited to the Legislative Council (LegCo) seeks to ban e-cigs along with other new tobacco products.

Tobacco is the only legal product, when consumed exactly as the producers intend, will harm or kill its users without fail

The Bill has gone through LegCo’s first and second readings. E-cig merchants were prepared for regulatory control, not an outright ban. Some say a ban will create a black market, or drive e-cig inhalers to tobacco.

Christine Hu, chair of the Coalition on Tobacco Affairs, accused the government of siding with the education and medical sectors, while ignoring studies which show vaping is less harmful than smoking tobacco.

Simon Chapman, emeritus professor of public health at Sydney University, urges skepticism about e-cigs: "The harm of tobacco took 30 to 40 years to show, as diseases of heart, lung and the cancers caused, take many years to manifest." Chapman cautions against repeating the past mistakes of failing to curb cigarette smoking.

The Federation of European Cancer Societies, submitted to the WHO Framework Convention on Tobacco Control, that tobacco is the only legal product, when consumed exactly as the producers intend, that will harm or kill its users without fail — along with luckless bystanders. The Federation projected one death every three seconds from smoking tobacco, by 2030.

It takes at least two more months for this Bill to be voted at the LegCo, said Aron Kwok Wai-keung, Legislator and Chairman of the Bills Committee on the Smoking Bill. Though no consensus has been reached, Kwok supports the full ban on new tobacco products.

“Otherwise, next time when a new tobacco product comes up, we need to go through legislative procedures again. The time wasted on routines will only risk our next generation,” Kwok reckoned. 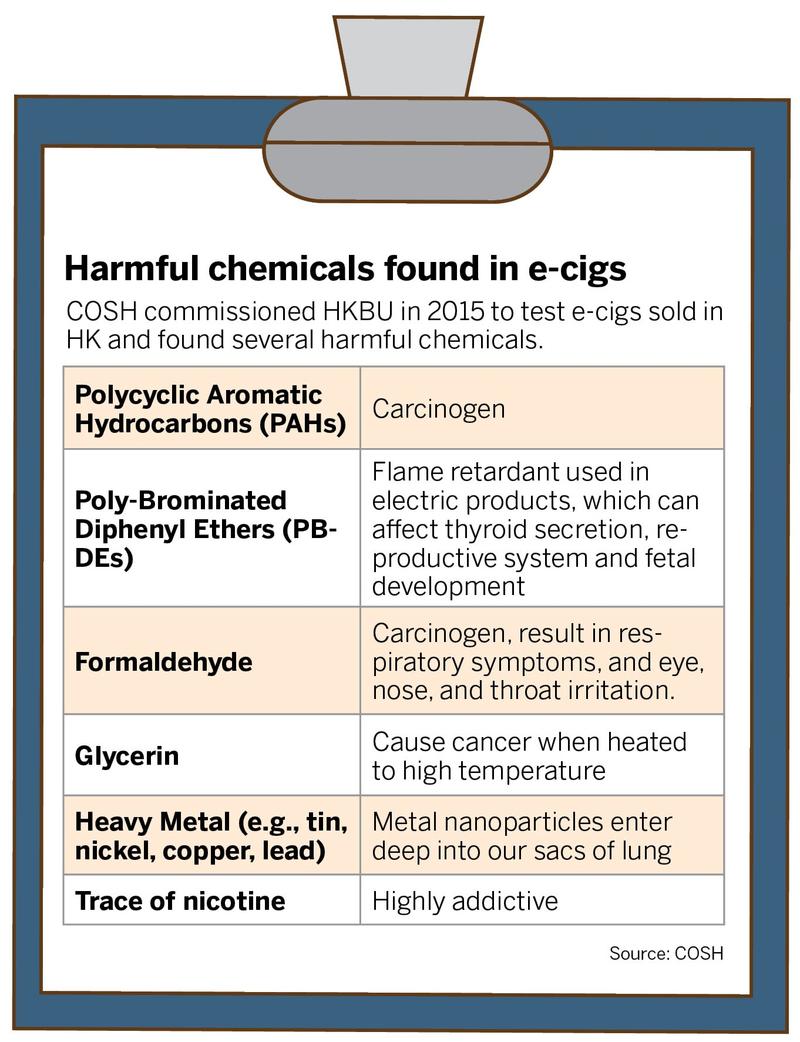 David Lam Tzit-yuen, vice president of the Hong Kong Medical Association, said e-cigs are a gateway to smoking addiction. He is not convinced that an age restriction will be effective.

Kelvin Wang Man-ping, Director of the Master of Nursing Programme at HKU, felt that the vaping industry entices youth to try the range of cool flavors with designer appeal, rather than as a substitute to smoking.

Wang agrees with Lam that an age restriction will only provoke teenagers to try e-cigs furtively. He advocates a full ban to prevent youth adoption, which may normalize smoking, as the unintended consequence.

Thomas McRae, who runs Vape Shop Hong Kong with three outlets, supports age restriction and licensing of retail vendors, with enforcement inspections. He is for regulation, but against a total ban, which will shut down his business and the retail trade.

McRae faults the research methodology for its 12-minute vaping duration. “No one vapes that way,” he said. “The typical inhale is two or three seconds with a 10 to 20-second gap, before the next inhale. After a few cycles, the e-cig may be put aside for half an hour.”

The HKBU report detailed the 12-minute duration to “ensure maximal exposure of relevant chemicals in human lungs.” That research qualification was missing in the main COSH report. However, the study confirmed that prolonged e-cig inhalation is harmful. 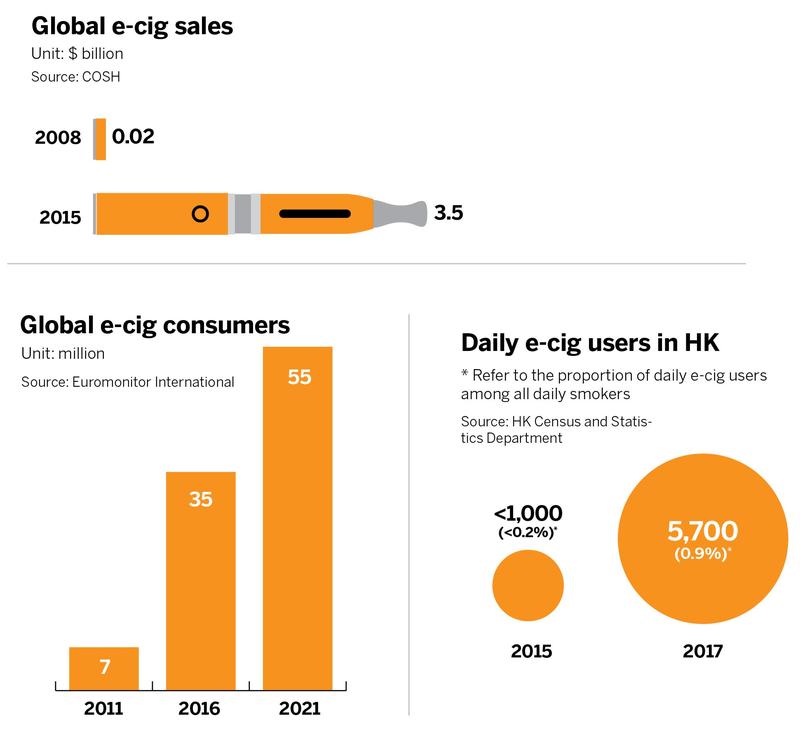 On a radio interview after her Policy Address last October, Lam said the HKSAR government does not care about the revenues raised by the tobacco tax. She prioritized the avoidable health risks to society.

The World Health Organization (WHO) recommends raising tobacco taxes to 75 percent of retail pricing, to discourage consumption, and to finance public health costs for self-inflicted and passive victims. The current tobacco tax level in Hong Kong is at 67 percent.

The WHO Bulletin Vol.94, April 2016, notes that in France, increased tobacco taxes which results in tripled cigarette prices between the mid-1990s and 2005, led to a 50 percent decline in deaths from lung cancers for males, over the same period.

From 2013, tobacco cartels in the UK, USA and Japan, aggressively acquired the independents who spearheaded the e-cig market. Big Tobacco wants to dominate e-cig wallets too, and is launching its own vaping brands.

Big-T has the distribution logistics, promotion savvy, regulatory influence and financial power, to boost vaping, as conventional smoking slows. The global tobacco market value stood at US$853 billion in 2017, growing at a compound annual growth rate of 7 percent from 2010.

The September 2018 Research & Markets Report forecasts the global e-cig market to bound to US$44.6 billion by 2023, from the US$3 billion estimated in 2013 by the Financial Times. 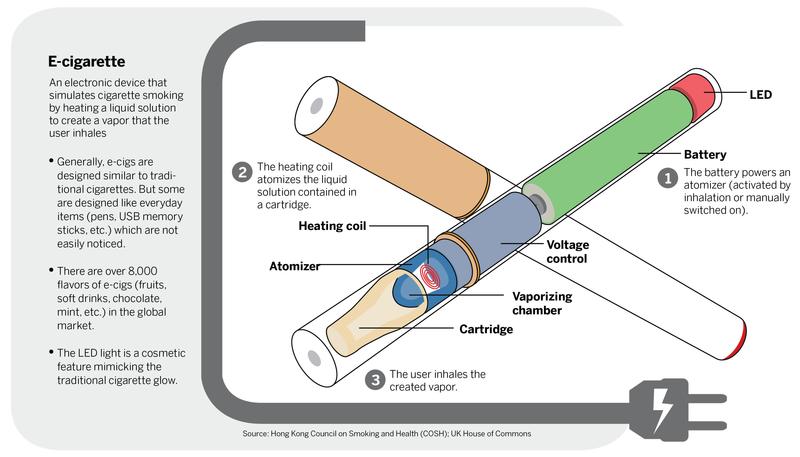 Singapore, Brunei and Thailand are among the 29 countries which ban sales of all types of e-cigs. Some 57 other countries impose regulatory restrictions. Most are unclear about the merits of e-cigs.

WHO proposed regulatory options to mitigate the harm of vaping, while it awaits medical data for definitive guidance. WHO’s Dr Armando Peruga offers a sobering analogy: “If smoking is like jumping from the 100th floor, using an e-cig is like jumping from a lower floor, but which floor? We don’t know.”

The UK’s National Health Service (NHS), commissioned Professor Peter Hajek of London University to compare e-cigs against other nicotine replacement therapy. The quit ratio for e-cigs was almost twice, at 18 percent, against 10 percent for gum and nicotine patches. The UK government duly approved its licensed use as therapy for smokers.

The corollary is that 80 percent of e-cig users did not quit smoking. Regular e-cig users tend toward dual-usage. The NHS does not certify long-term e-cig inhalation as harmless. 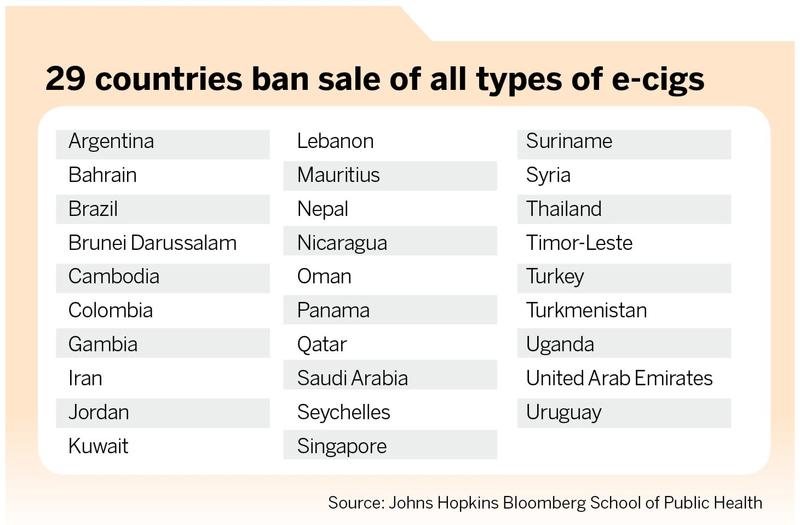 Chemists analyzing e-liquids heated to vaporize, are alarmed they could be even more toxic than nicotine. Erika Sward, assistant vice president of National Advocacy for the American Lung Association, told Healthline in Nov 2018 that consumers are being assured vaping is safe, when its toxicity and reactive byproducts after heating, remain uncharted.

Dr Sven-Eric Jordt, professor of anesthesiology, pharmacology, and cancer biology at Duke University School of Medicine, told Healthline, “Sometimes 40 percent or more of the flavor, is reacting with the solvent, converting to reaction products.”

A 2018 study at the University of North Carolina of the popular flavoring cinnamaldehyde, found that its fumes degrade lung airway functions when inhaled. Researchers warn that a chemical which may pass as safe for food additives by the FDA, may turn toxic when heated and inhaled.

Flavors not to inhale

Diacetyl which yields buttery flavors, caused workers at a popcorn factory to choke and die. Its fine mist enters the capillaries of lung tissue, constricts the airwaves, triggers wheezing and shortness of breath, in a condition called bronchiolitis obliterans, or “popcorn lung.” There is no cure for it. Hong Kong has no ban on diacetyl in e-liquids. 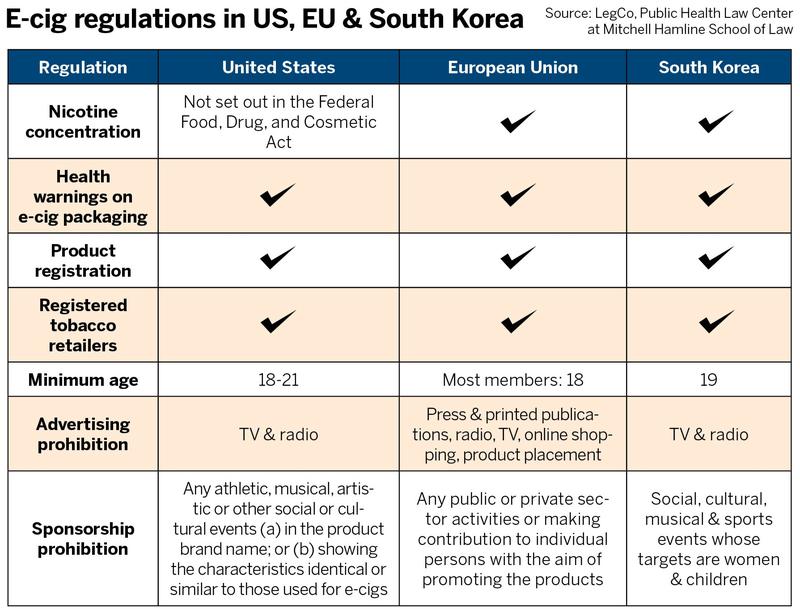 Trained in Traditional Chinese Medicine at the Liaoning College in North-east China, Hon Lik patented the first nicotine-based electronic cigarette in 2003. He successfully manufactured and sold the product first in China, then worldwide.

The earliest patent for an electronic non-nicotine cigarette was by Herbert Gilbert in 1963, where smokers inhaled flavored steam. He failed to commercialize it. He was half a century ahead of his time.