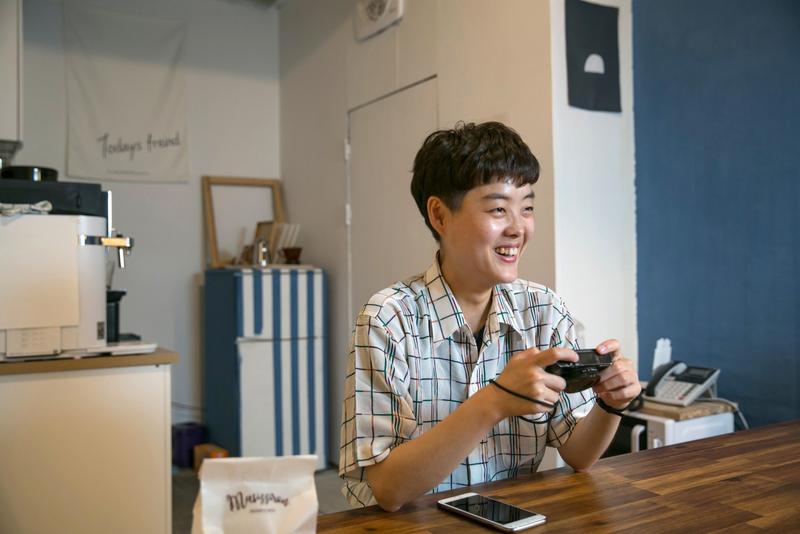 Baeck Ha-na, a host of a feminist Youtube segment, "Honsarm Bigyeol," smiles as she talks to her co-host (not in frame) at a rented office space in Seoul, South Korea, July 13, 2019. (JEAN CHUNG / BLOOMBERG)

Baeck Ha-na works in accounting during the week. On weekends, she’s a YouTube star in South Korea, promoting the “live-alone life.”

Baeck, whose YouTube channel in English is called “Solo-darity,” objects to being called a “mi-hon” — someone who is not yet married. She’s part of a growing and determined group of South Korean women rejecting marriage and motherhood.

Such decisions are intensifying demographic and economic challenges for the government as the country faces one of the world’s lowest birth rates and a shortfall in pension funding that is getting harder to close with fewer workers joining the labor force.

“Society made me feel like a failure for being in my 30’s and not yet a wife or a mother,” Baeck said. “Instead of belonging to someone, I now have a more ambitious future for myself.”

Baeck and her YouTube co-host maintain that the government’s current approach infuriates many women. They argue that the latest efforts to boost birthrates are “abusive” and “frustrating” because they fail to address the lack of legal avenues to ensure career development for mothers or alleviating financial burdens in raising children.

ALSO READ: Pressure piles on women in the workplace

When it comes to the birth rate, South Korea has ranked at the bottom of OECD economies in the Asia-Pacific region since 2016, with that rate going even lower this year. According to data compiled by the World Bank, South Korea and Puerto Rico tied for the lowest overall rates as of 2017: Seven children per 1,000 people, followed by Japan and the Hong Kong Special Administrative Region.

A separate report from the agency shows fewer women believe marriage is a must. In 2010, 64.7% of women in South Korea answered that marriage is required for women, while 48.1% gave the same response in 2018.

South Korea’s government is reacting by offering incentives to encourage marriage and especially parenthood. In Sejong, a city designated to be South Korea’s new administrative capital, about 30 single men and women attended their latest event in June. The office’s goal was to encourage working single men and women to take part in “recreational activities and table talks.”

In Gangnam, the Seocho District office held a similar event last year with 50 participants, 14 of whom got matched, the organizer said, adding they plan to hold another session this year.

In a more rural part of the country in South Chungcheong province, the government has asked single women to submit an application that includes their height, weight, employment history, as well as a recent photo and indicate whether they were married before.

“We are now at the last golden time to fix a serious population problem,” Moon said in a speech launching the committee. “We must now focus on how marrying, giving birth doesn’t limit the lives of women.” 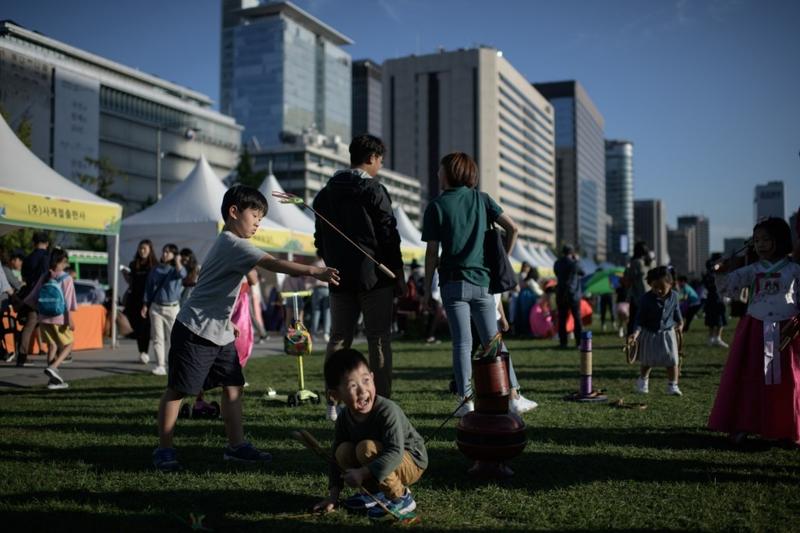 The nation’s latest report on population cited a looming threat for South Korea’s labor force. For a decade following 2017, the number of people within the productive age range is expected to fall by 2.5 million, while the older population will rise by 4.5 million.

An estimated 37.6 million people were measured to be in the potential work force in 2017. By 2067, that number is anticipated to drop by more than half to 17.8 million people, according to the report.

For a decade following 2017, the number of people within the productive age range is expected to fall by 2.5 million, while the older population will rise by 4.5 million

The demographic changes are already having an impact on some businesses.

More than 20% of all wedding halls in Seoul have closed, including two of the largest venues in wealthier neighborhoods of Gangnam: Suaviss Wedding Hall, and JS Gangnam Wedding Culture Center, according to a city report.

The Seoul Education Office announced earlier this year that it expects to close three elementary and middle schools by next February, while another middle school is closing and combining its campus with an elementary school that is also facing a student shortage.

RED MORE: Like a son but cheaper: Harried S. Koreans opt for pets over kids

Baeck, the YouTuber, says government policies “to force a woman into marriage and childbearing represent a deeply ingrained perception of a woman in our society as an object, not an individual.”

She even refuses to be called “mi-hon,” or “not yet married,” a common Korean term for a single woman. Baeck instead prefers “bi-hon,” which means “to not marry, to not have children.”

Baeck is a member of EMIF, or “Elite without Marriage, I am going Forward,” a network created for women to host discussions, attend film screenings and hold networking events. At a recent evening meeting of EMIF in western Seoul, nine members moved desks to form a circle to discuss being a “bi-hon,” and the policies created to tackle South Korea’s low birthrate.

The government’s biggest problem is that they aren’t listening to the women ...

“The government’s biggest problem is that they aren’t listening to the women — the actual subjects that have to bear the children and have to raise the children,” said Kang Han-byul, the group’s co-founder. “They try to sell this idea that a family is beautiful, having children is beautiful, when there’s many unspoken things that actually happen to the woman physically, mentally — which is why these policies will never win us over.”

Others also reject long-held roles for women in South Korea, including motherhood. “This traditional role enforced on us from a boys-only soccer field at school, to a boys club in a company office already makes us second-class citizens, and I don’t want to be used as a tool simply for baby-making,” said Jung Se-young, a co-host on Baeck’s YouTube channel.

The reaction to what the women call South Korea’s government’s “tone-deaf” policies have prompted a hashtag on Twitter as well, with women sharing their stories about living a life not focused on marriage and having babies.

“People used to say I can’t do anything without a father in the house,” an anonymous account dedicated to sharing her “bi-hon” life posted on Twitter. “I bought a silicone gun on my own, and can mend my own windows to block the rain from leaking in. Why did I ever doubt myself before?”