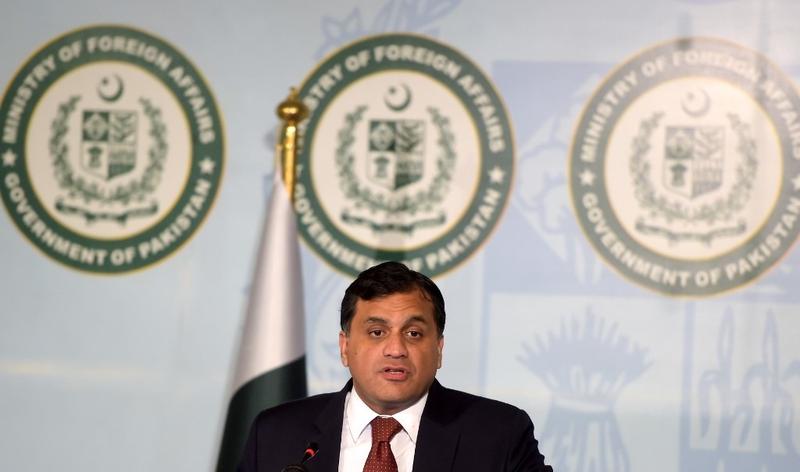 Pakistan's Foreign Ministry spokesman Mohammad Faisal speaks to the media at the Foreign office in Islamabad,  March 28, 2019. The spokesman said Pakistan's Foreign Ministry on April 7, 2019, handed a demarche to the Indian deputy high commissioner to convey Islamabad's protest and objections over India's alleged plans to carry out military action against Pakistan in the coming days.  (AAMIR QURESHI / AFP)

ISLAMABAD — Pakistan's Ministry of Foreign Affairs on Sunday summoned Indian deputy high commissioner and warned India over its alleged plans to carry out some military action against Pakistan in the coming days, an official said.

"India has been strongly warned by Pakistan in case of any misadventure," said the spokesperson, adding that India should expect a fitting response from Pakistan if the former resorts to any aggression.

The warning came after Pakistan's Foreign Minister Shah Mahmood Qureshi said at a press conference on Sunday that India is planning more military action against Pakistan in the third week of April.

"I hold a position of responsibility. I am aware of what I am saying and know that it will be noticed by the international media. We had reliable intelligence that India is devising a new plan. There are chances of another attack against Pakistan," the minister said.

The minister said if India executes its plans, it would impact greatly on the peace and stability of the region and added that Pakistan wants the international community to take notice of the irresponsible behavior and reprimand India for taking any action.

Relations between Pakistan and India got tense after a suicide attack in Indian-controlled Kashmir killed at least 40 Indian security personnel on Feb 14. Following the suicide attack, Indian Prime Minister Narendra Modi said India will give "a befitting reply" to Pakistan.

Pakistan announced that it have shot down two Indian fighter jets for violation of its territory a day later and arrested an Indian pilot who was released later as a gesture of peace.