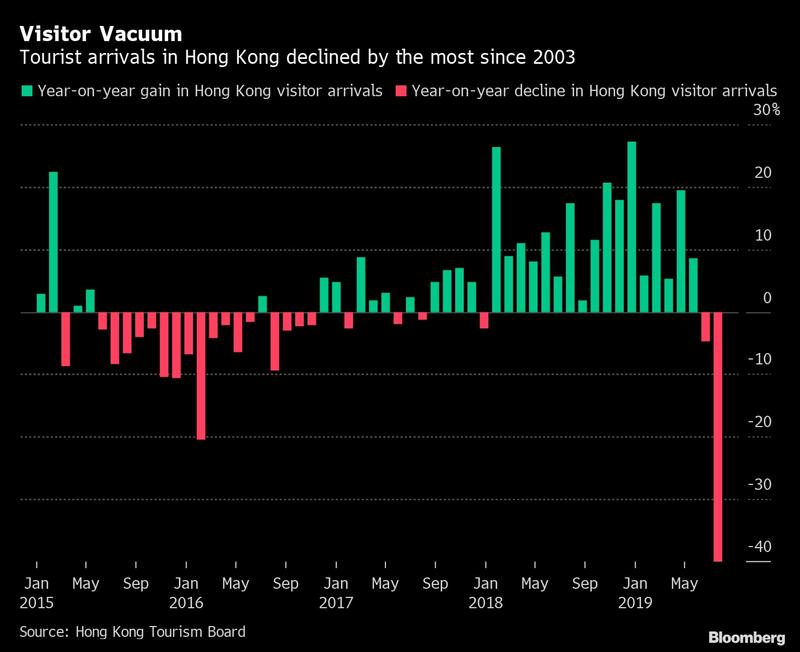 The ongoing protests in Hong Kong, now in their 15th week, have delivered a blow to the city’s tourism industry not seen since the 2003 SARS epidemic.

Tourist arrivals in the city declined almost 40 percent in August from a year earlier, Financial Secretary Paul Chan wrote in a blog post Sunday. That’s the biggest year-on-year decrease in visitor numbers since May 2003, when arrivals sank almost 70 percent in the midst of the disease outbreak that ultimately claimed hundreds of lives in the city, according to data compiled by Bloomberg from the Hong Kong Tourism Board.

In a blog post on Sunday, Financial Secretary Paul Chan also said occupancy rates of hotels in some districts fell more than half, and room rates dropped 40 percent to 70 percent

“Social issues in the past few months, especially the continued violent clashes and blockading of airport and roads, have seriously impacted Hong Kong’s international image as a safe city,” Chan said in his post, which was written in traditional Chinese. “The most worrying thing is that the situation is not likely to turn around in the near future.”

The city’s tourism, retail and hotel industries have been particularly hard hit, Chan said. Occupancy rates of hotels in some districts fell more than half while room rates decreased 40 percent to 70 percent. Many meetings and business trips have been postponed or moved to other places, he said.

The protests have placed a growing toll on the city’s economy. Retail sales by value dropped 11.4 percent in July, the first full month affected by the protests, while sentiment among small businesses has hit record lows. Hong Kong’s economy overall contracted 0.4 percent in the second quarter from the previous period, raising the prospect of a technical recession.

Based on August 2018 tourism figures, a 40 percent drop would result in about 3.5 million visitors, the lowest level in more than seven years. 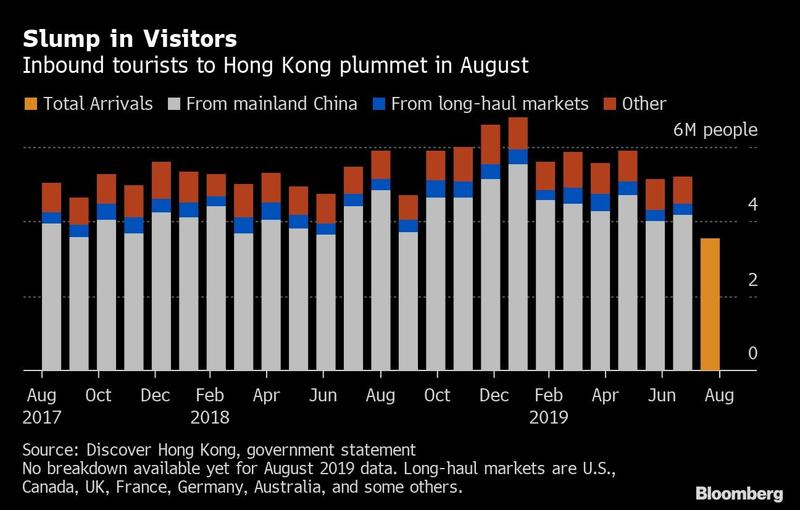 The MSCI Hong Kong Index was down 0.1 percent.

Retailers are making plans to ride out the disruption. Sa Sa International Holdings Ltd, a cosmetics retailer, has asked some managers in its back office to take no-pay leave for as many as 4 days each month from September, Ming Pao reported on Monday, citing people familiar with the matter. Sa Sa shares dropped as much as 3.9 percent.