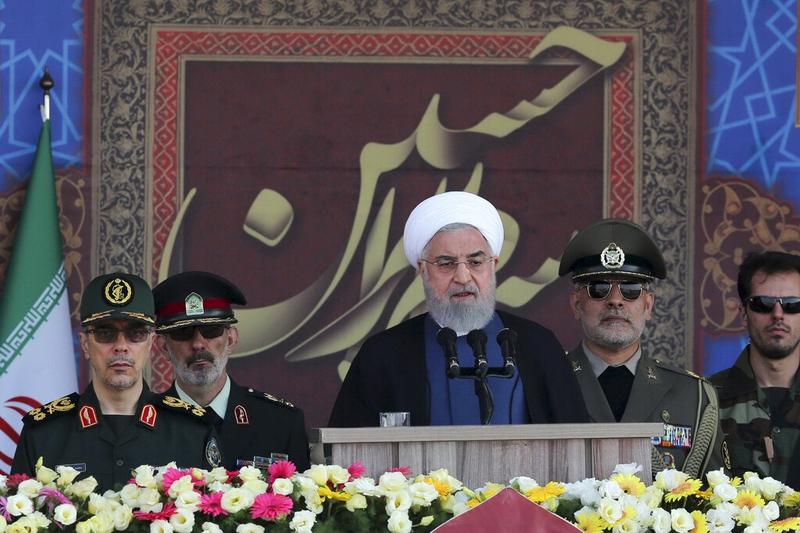 In this photo released by the official website of the office of the Iranian Presidency, President Hassan Rouhani speaks at a military parade marking 39th anniversary of outset of Iran-Iraq war, in front of the shrine of the late revolutionary founder Ayatollah Khomeini, just outside Tehran, Iran, Sept 22, 2019. (IRANIAN PRESIDENCY OFFICE VIA AP)

President Hassan Rouhani separately promised to unveil a regional peace plan at this week's upcoming high-level meetings at the United Nations, which comes amid heightened Mideast tensions following a series of attacks, including a missile-and-drone assault on Saudi Arabia's oil industry.

Those who want to link the region's incidents to the Islamic Republic of Iran are lying like their past lies that have been revealed.

The US alleges Iran carried out the Sept 14 attack on the world's largest oil processor in the kingdom and an oil field, which caused oil prices to spike by the biggest percentage since the 1991 Gulf War. While Yemen's Iranian-allied Houthi rebels claimed the assault, Saudi Arabia says it was "unquestionably sponsored by Iran."

For its part, Iran denies being responsible and has warned any retaliatory attack targeting it will result in an "all-out war." That's as it has begun enriching uranium beyond the terms of its 2015 nuclear deal with world powers, which the US unilaterally withdrew from over a year earlier.

Rouhani spoke from a riser at the parade in Tehran, with uniformed officers from the country's military and its paramilitary Revolutionary Guard beside him. The cleric later watched as goose-stepping soldiers carrying submachine guns and portable missile launchers drove past as part of "Holy Defense Week," which marks the start of the Iran-Iraq war in 1980.

READ MORE: US to send troops to Saudi Arabia, hold off on striking Iran

Rouhani said Iran was willing to "extend the hand of friendship and brotherhood" to Persian Gulf nations and was "even ready to forgive their past mistakes."

"Those who want to link the region's incidents to the Islamic Republic of Iran are lying like their past lies that have been revealed," the president said. "If they are truthful and really seek security in the region, they must not send weapons, fighter jets, bombs and dangerous arms to the region."

Rouhani added that the US and Western nations should "distance" themselves from the region.

ALSO READ: Iran's Guard says ready for 'any scenario' amid US standoff

"Your presence has always been a calamity for this region and the farther you go from our region and our nations, the more security would come for our region," he said. 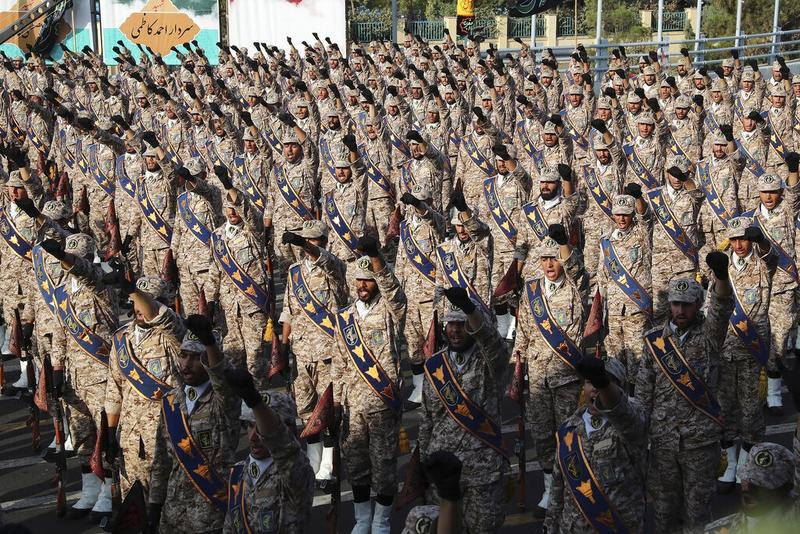 In this photo released by the official website of the office of the Iranian Presidency, Revolutionary Guard troops chant slogans at a military parade marking 39th anniversary of outset of Iran-Iraq war, in front of the shrine of the late revolutionary founder Ayatollah Khomeini, Sept 22, 2019. (IRANIAN PRESIDENCY OFFICE VIA AP)

He said Iran's plan would focus on providing security in the Persian Gulf, the Strait of Hormuz and the Gulf of Oman "with help from regional countries."

The US maintains defense agreements across the Persian Gulf with allied Arab nations and has tens of thousands of troops stationed in the region. Since 1980, it has viewed the region as crucial to its national security, given its energy exports. A fifth of all oil traded passes through the Strait of Hormuz, the narrow mouth of the Persian Gulf. The US plans to send additional troops to the region over the tensions.

The parades and maneuvers Sunday appeared aimed at projecting Iranian strength with naval vessels, submarines and armed speedboats swarmed across the Persian Gulf and troops showed off land-to-sea missiles capable of targeting the US Navy. Commandos fast-roped down onto the deck of a ship, resembling Iran's July seizure of a British-flagged oil tanker.

Iranian ship seizures, as well as oil tanker explosions that the US blames on Iran, saw America create a new coalition to protect Mideast waters. So far, Australia, Bahrain, Saudi Arabia, the United Kingdom and the United Arab Emirates have agreed to join it.

"We regard the emergence of such coalitions as the start of a new game to make the region insecure," Larijani said, according to Tasnim.

Iran separately displayed its Khordad-3 surface-to-air missile that downed a US military surveillance drone in the Strait of Hormuz in June.

Sunday also marked the one-year anniversary of an attack on a military parade in Ahvaz that killed 25 people. Both separatists and the Islamic State group claimed responsibility for the assault, while Iran blamed Saudi Arabia and the UAE for allegedly supporting the attackers. Both nations denied the claim, though a propaganda video published by a semi-official news agency in Iran close to the Guard later circulated threatening them with missile attacks.