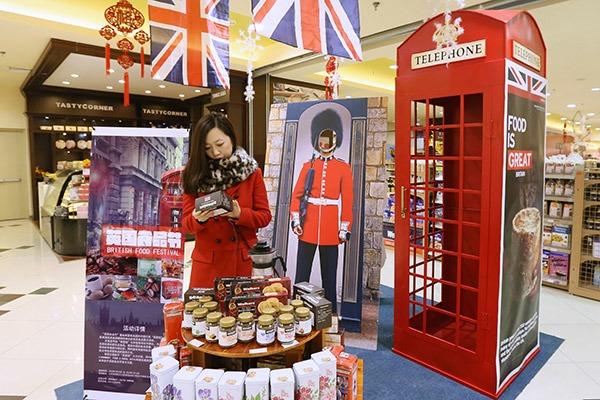 A woman examines food imported from the United Kingdom at a supermarket in Beijing. (PHOTO / CHINA DAILY)

Ensuring that their exhibits shine at the first China International Import Expo in Shanghai tops the agenda for foreign executives coming to the city.

But Jerry Liu, China president of Cargill, has another important mission. He will sign a contract for the US agricultural conglomerate to participate in the next expo.

"The CIIE provides not only a platform for multinational companies to showcase their products but also a great platform for governments, enterprises, institutions and even consumers to connect and exchange ideas," Liu said.

Cargill is bringing a wide range of products, including beef, cocoa, chocolate and edible oil, to the expo. It is one of the more than 3,000 companies from over 130 countries and regions keen to take advantage of the opportunities offered by the world's first import-themed national-level expo, being held this week until Saturday.

The CIIE is a concrete measure by China to promote further opening-up as it transforms from being the world's biggest exporter of goods to an even bigger buyer.

It will facilitate economic globalization and trade liberalization, and is not a solo performance by China but a chorus by all countries, Minister of Commerce Zhong Shan said.

The Ministry of Commerce announced on Saturday that more than 100 new products and technologies will debut during the event, with some being shown to the world for the first time at the CIIE. Over 3,000 companies have signed up to participate, including more than 200 big names from the Fortune 500 list.

China will import US$24 trillion of goods in the next 15 years, according to Wang Bingnan, vice-minister of commerce.

The expo shows China's determination to open wider to the world, as economic globalization has suffered setbacks, the multilateral trading system has been challenged and protectionism has gradually risen, said Gao Yan, chairwoman of the China Council for the Promotion of International Trade.

As well as offering opportunities for companies from G20 countries to further diversify market channels in China, the CIIE is also welcoming more than 30 of the world's 44 least-developed countries.

"Global companies have been keen to further dig into the market potential in China at the next level, as the country will continue to be the world's largest consumption power for many products, commodities and services, such as grain, industrial goods and healthcare solutions, for its ongoing consumption upgrading," said Chen Wenling, chief economist at the China Center for Economic Exchanges.

According to registration data, about 5,000 exhibits at the expo are being shown in China for the first time.

Consumers and companies will be able to experience global quality and bargain prices without going abroad, fully enjoy the benefits of globalization, and better meet the need to upgrade domestic consumption and promote high-quality economic development in China, said Vice-Minister of Commerce Fu Ziying.

"The CIIE also creates a platform for economies that wish to build a sound trade environment and be more open to get more involved in global governance, as the expo is held when the global economy faces downward pressure on foreign direct investment affected by protectionism and unilateralism," said Yu Jianlong, secretary-general of the China Chamber of International Commerce.

Business leaders said China's growing demand for imported products and services will provide a historic opportunity for global companies to enter its massive market for the long run.

The expo is timely in the current global trade context, said Lin Wei, KPMG partner in China, as it aims to dispel the stereotype that China will continue to be an export-driven economy. Instead it will foster free trade and global collaboration and multilateralism, and counter some of the unilateralism that has been witnessed and the protectionist trade barriers that have been erected, Lin said.

"Many foreign companies also hope they will have better exposure in China and find more partners to help them distribute their products and services not only in top-tier cities but also further into lower-tier cities and county-level markets, as well as markets related to the Belt and Road Initiative," Lin said.

He said China's economy is evolving away from an exportd-riven model. The country has witnessed a steady increase in imports, especially those that are high-tech or environmentally friendly and consumer products from global markets, as well as measures to address trade surpluses with other countries and regions, and the CIIE is a strong sign of that.

Celina Chew, president of Bayer Group (China), said the CIIE will serve as a platform for China to boost the quality of global trade and restructure domestic industries to make the country a more competitive and friendly market.