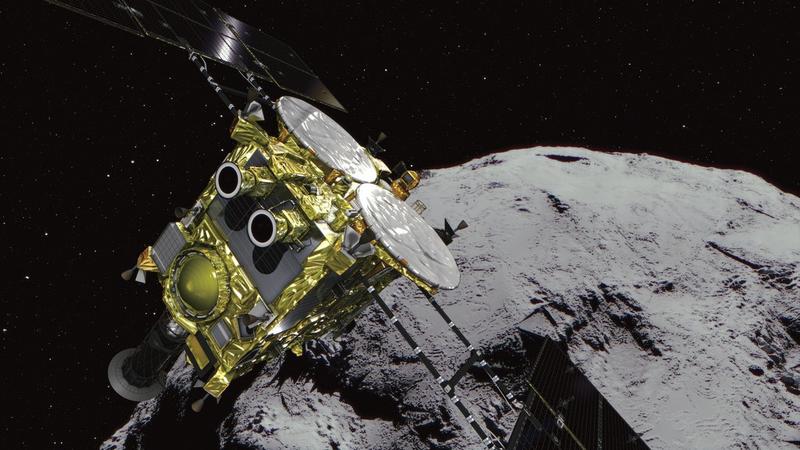 TOKYO - A Japanese space explorer arrived at an asteroid Wednesday after a 3½-year journey to undertake a first-ever experiment: blow a crater in the rocky surface to collect samples and bring them back to Earth.

The unmanned Hayabusa2 spacecraft reached its base of operations about 20 kilometers from the asteroid and some 280 million kilometers from Earth, the Japan Aerospace Exploration Agency said.

Over the next year and a half, the spacecraft will attempt three brief touch-and-go landings to collect samples. If the retrieval and the return journey are successful, the asteroid material could provide clues to the origin of the solar system and life on Earth.

The mission is challenging. The robotic explorer will spend about two months looking for suitable landing places on the uneven surface. Because of the high surface temperature, it will stay for only a few seconds each time it lands.

If the retrieval and the return journey are successful, the asteroid material could provide clues to the origin of the solar system and life on Earth

The asteroid, named Ryugu after an undersea palace in a Japanese folktale, is about 900 meters in diameter. In photos released by JAXA, the Japanese space agency, it appears more cube-shaped than round. A number of large craters can be seen, which Project Manager Yuichi Tsuda said in an online post makes the selection of landing points "both interesting and difficult."

The first touchdown is planned for September or October. Before the final touchdown scheduled for April-May, Hayabusa2 will send out a squat cylinder that will detonate above the asteroid, shooting a 2-kilogram copper projectile into it at high speed to make a crater.

Hayabusa2 will hide on the other side of the asteroid to protect itself during the operation and wait another two to three weeks to make sure any debris that could damage the explorer has cleared. It will then attempt to land at or near the crater to collect underground material that was blown out of the crater, in addition to the surface material from the earlier touchdowns.

The spacecraft will also deploy three rovers that don't have wheels but can hop around on the surface of the asteroid to conduct probes. Hayabusa2 will also send a French-German-made lander to study the surface with four observation devices.

Asteroids, which orbit the sun but are much smaller than planets, are among the oldest objects in the solar system. As such, they may help explain how Earth evolved, including the formation of oceans and the start of life.

Hayabusa2 was launched in December 2014 and is due to return to Earth at the end of 2020. An earlier Hayabusa mission from 2003 to 2010 collected samples from a different type of asteroid and took three years longer than planned after a series of technical glitches, including a fuel leak and a loss of contact for seven weeks.

NASA also has an ongoing asteroid mission. Its Osiris-Rex spacecraft is expected to reach the asteroid Bennu later this year and return with samples in 2023.