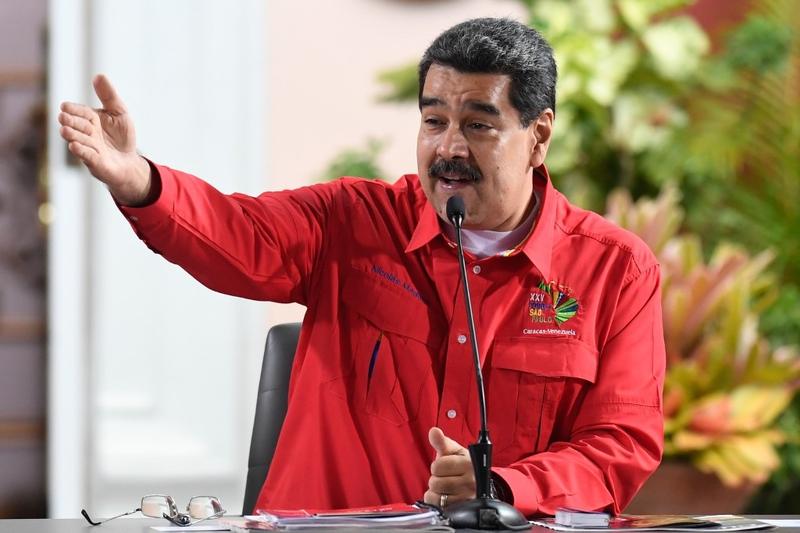 In this file photo taken on July 28, 2019 Venezuelan President Nicolas Maduro delivers a speech during the closing ceremony of the the Sao Paulo Forum at Miraflores Presidential Palace in Caracas. (FEDERICO PARRA / AFP)

BEIJING — A foreign ministry spokesperson said on Wednesday that China opposes US interference in Venezuela's internal affairs, urging the United States to stop its bullying behavior of wantonly suppressing the other country.

What the United States said and did constitutes gross interference in Venezuela's internal affairs...China firmly opposes that

"We have to point out that which political party rules a country is a domestic issue and should be decided by its people," spokesperson Hua Chunying said.

Hua's remarks came after US President Donald Trump issued an executive order on Monday to freeze the Venezuelan government’s assets in the United States.

"What the United States said and did constitutes gross interference in Venezuela's internal affairs and severely violates the basic norms governing international relations. China firmly opposes that," she said.

Facts have proven time and again that sanctions will never help resolve the Venezuelan issue. Instead, they will only increase the risk of the situation getting out of control, she added.

READ MORE: Venezuela talks in the balance as US ups pressure on Maduro

"China urges the US to face up to the essence of the Venezuelan issue, return to the right path of respecting the international law, and support the dialogue process of the Venezuelan government and the opposition," she said.

In response to US National Security Adviser John Bolton's warnings to China and Russia against supporting the Maduro government, Hua called on the United States to draw lessons from history and give up sowing discord immediately.

China-Venezuela cooperation, conducted legitimately with equality, mutual benefit, win-win results and market principles, has delivered benefits to the two countries and peoples and brooks no interference from others, the spokesperson said.

"China is fully convinced that the China-Venezuela cooperation will go on as usual no matter how the situation changes," she said.