Wildfires kill at least 74 near Athens 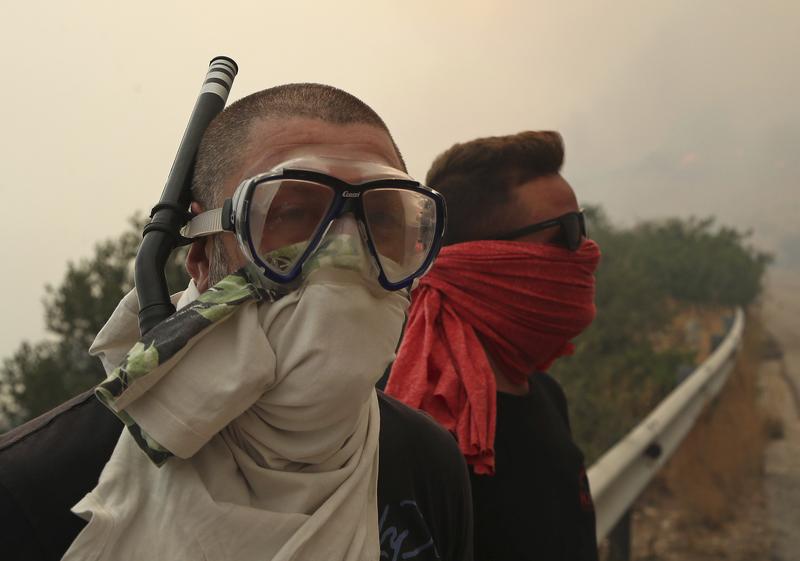 People cover their faces from the smoke that fills the sky near Kineta, west of Athens, after roads were blocked due to forest fires, July 23, 2018. (THANASSIS STAVRAKIS / AP)

ATHENS — Wildfires sweeping through a Greek resort town have killed at least 74 people including families with children found clasped in a last embrace as they tried to flee the flames.

Greece is going through an unspeakable tragedy

The inferno was by far Greece's worst since fires devastated the southern Peloponnese peninsula in August 2007, killing dozens. Officials said it broke out in Mati, east of Athens, late on Monday afternoon and was broadly contained by Tuesday afternoon though still burning in some areas, with the risk of reigniting in scrubland parched by Greece's searing summer heat.

"Greece is going through an unspeakable tragedy," Prime Minister Alexis Tsipras said as he appeared on television to declare three days of national mourning.

Emergency crews found the bodies of 26 victims, some of them youngsters, lying close together near the top of a cliff overlooking a beach. They had ended up there after apparently searching for an escape route. 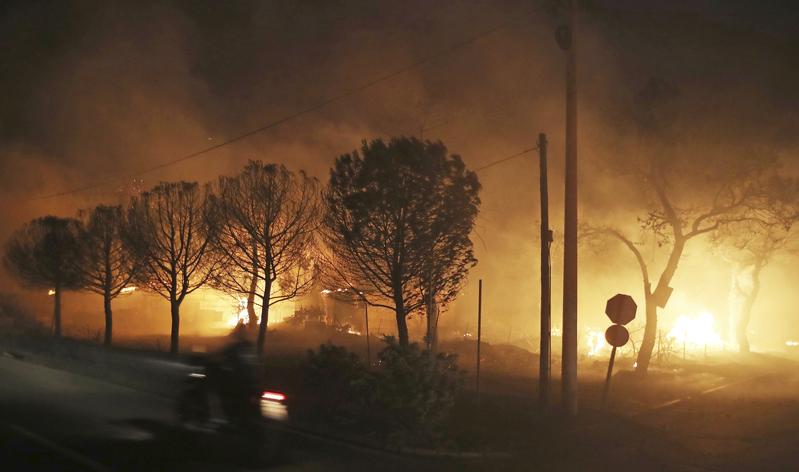 Buildings burn in the town of Mati, east of Athens, July 23, 2018. Regional authorities have declared a state of emergency in the eastern and western parts of the greater Athens area as fires fanned by gale-force winds raged through pine forests and seaside settlements on either side of the Greek capital. (THANASSIS STAVRAKIS / AP)

Many hours after the blaze broke out, the strong smell of charred buildings and trees lingered in the air in parts of Mati on Tuesday. White smoke rose from smouldering fires.

Residents, their faces blackened by smoke, wandered the streets, some searching for their burned-out cars, others for their pets. The eerie silence was punctured by fire-fighting helicopters and the chatter of rescue crews.

A firefighter sprays water on the fire in the town of Mati, east of Athens, July 23, 2018. (THANASSIS STAVRAKIS / AP)

A Reuters photographer saw at least four dead people on a narrow road clogged with cars heading to a beach.

Many in the area were unable to escape the fast pace of the blaze even though they were a few metres from the Aegean Sea or in their homes, the fire service said.

"We went into the sea because the flames were chasing us all the way to the water. It burned our backs and we dove into the water," said Kostas Laganos, a survivor. 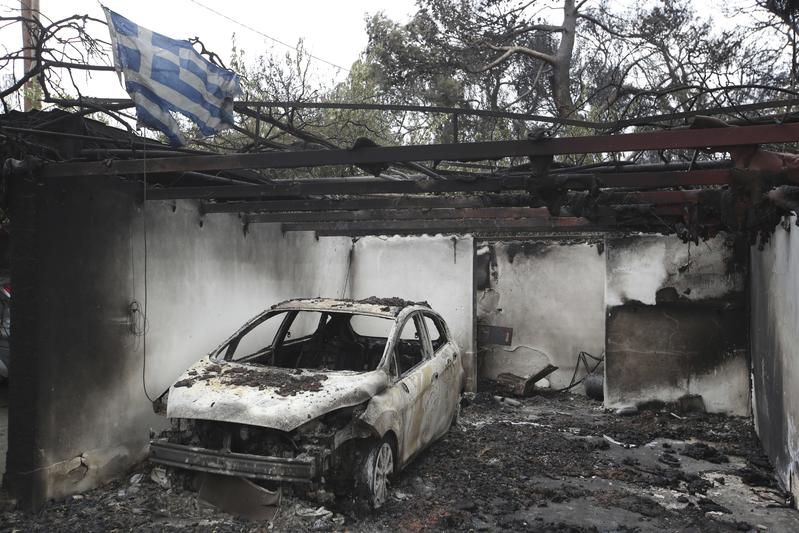 A Greek national flag flutters over the charred remains of a burned-out car and house in Mati east of Athens, July 24, 2018. (THANASSIS STAVRAKIS / AP)

Working through the night, coastguard vessels and other boats rescued almost 700 people who had managed to get to the shoreline and pulled another 19 survivors and six dead bodies from the sea, the coastguard said.

In total, at least 74 people had been killed and the death toll was expected to rise, a fire brigade spokeswoman said. Poland said two of its citizens, a mother and her son, were among the victims.

It was not clear how many people remained unaccounted for as boats combed beaches for any remaining survivors, with military hospitals on full alert, the Greek government spokesman said.

One of the youngest victims was believed to be a six-month-old baby who died of smoke inhalation, officials said. At least 187 people were injured, among those 23 children. 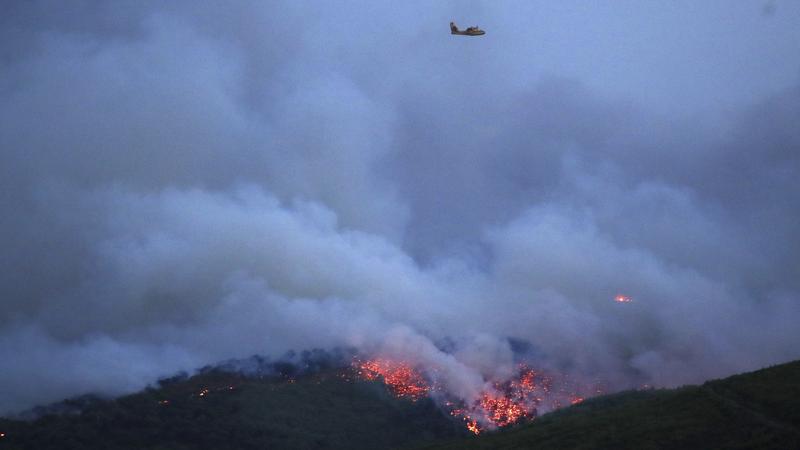 A plane flies over the smoke and fire coming the town of Mati, east of Athens, July 23, 2018. (THANASSIS STAVRAKIS / AP)

Wildfires are not uncommon in Greece, and a relatively dry winter and hot summer helped create the current tinder-box conditions. The immediate cause of the current blaze was not immediately clear.

Mati, 29 km east of Athens, is a popular spot for Greek holiday-makers, particularly pensioners and children at summer camps.

Greece's fire service said the intensity and spread of the wildfire at Mati had slowed as winds died down on Tuesday afternoon, but it was still not fully under control.

It urged residents to report missing relatives and friends. Some took to Twitter and Facebook, posting photographs of young children and elderly couples they hoped to track down. 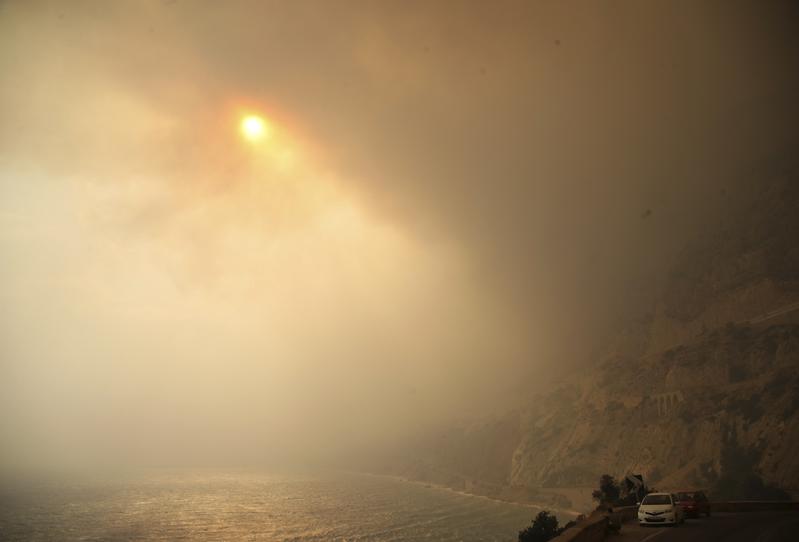 The sun breaks through a smoked filled sky as cars drive on a road near Kineta, west of Athens, July 23, 2018. (THANASSIS STAVRAKIS / AP)

Greece issued an urgent appeal for help to tackle fires that raged out of control in several places across the country, destroying homes and disrupting major transport links.

"Our thoughts go to Greece and the victims of the terrible fires," French President Emmanuel Macron said in tweets published in French and Greek.

Pope Francis said in a telegram he was deeply saddened by the tragedy and prayed for the victims and their families. 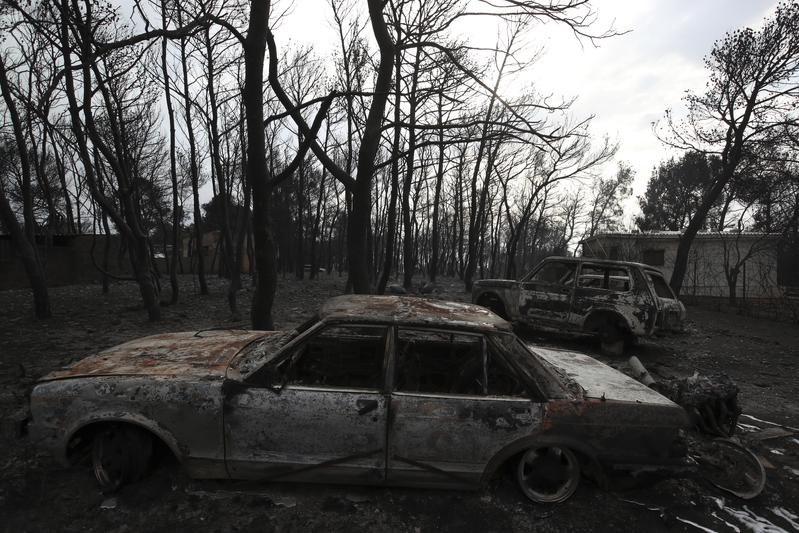