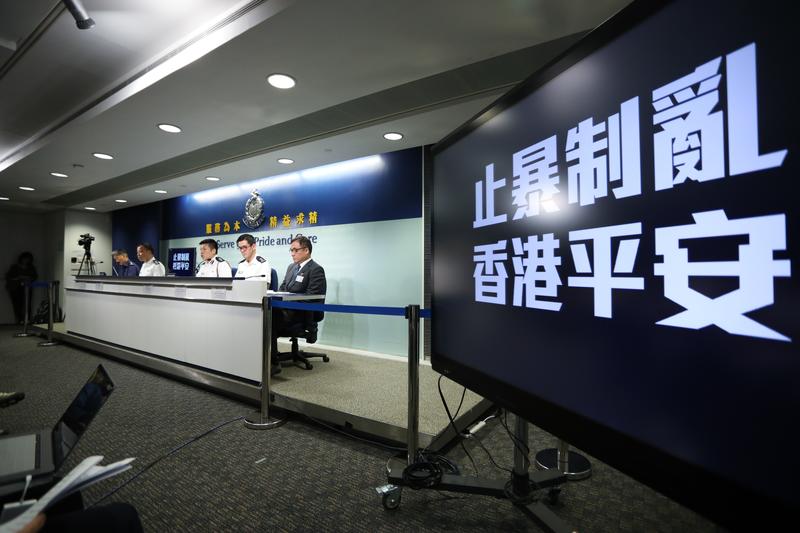 The Hong Kong Police Force announced on Monday a mechanism to identify officers performing their duties.

The move, a response to calls for more transparency, came after some officers withheld their badge numbers for fear of having their personal information leaked by vengeful protesters.

Under the new system, each officer in the force’s daily operations will be required to wear a card with “call signs”, or internal codes, that have information about their positions and departments. This can help the public identify officers in the line of duty while protecting officers from incessant, malicious leaks of their personal data, the police said at a news briefing at police headquarters in Wan Chai.

Call signs can be accessed only by the police, unlike the police identification number system, which is open to the public.

It has been common practice for police to use call signs to identify officers within the force, said Tse Chun-chung, chief superintendent of the Police Public Relations Branch.

People can report police misconduct to the force using these codes if they believe that officers treated them inappropriately, Tse said. In this sense, the call signs serve almost the same function as police operation numbers, he added.

“Our new policy strikes a fair balance between protecting police officers from doxxing and proper identification of officers,” Tse said.

At least 2,600 police officers, as well as their family members, have been victims of doxxing, with some receiving death threats, Wong Wai-shun, senior superintendent of the police’s operations wing, said at the briefing.

No police officers would be comfortable working round-the-clock on the front lines while worrying about their families, he added.

The High Court on Friday granted an interim injunction banning publishing and disseminating personal information on police officers and their family members, a move that followed a request from Justice Secretary Teresa Cheng Yeuk-wah and Police Commissioner Stephen Lo Wai-chung.

Over the past week, at least seven police officers were injured, including one who was hit in the chest and had a rib fractured by a brick believed to have been thrown by a radical protester, the police said at the briefing resumed after interruption.

Monday’s briefing was interrupted for over 20 minutes when a female reporter and a companion began incessantly shouting and shining strobe flashlights at the officers on stage, a move to protest the police’s alleged mistreatment of journalists at an illegal rally in Kowloon on Sunday.

The briefing resumed after the two were removed and the reporter’s call to other reporters to boycott the conference was ignored. The police said that any act calculated to “hijack” the news conference would not be tolerated because it denies the public their right to receive information directly from the police.

Tse said the police felt deep regret for the interruption, adding that “good discipline” is crucial in order for the news conference to function well.

“The press conferences of Hong Kong police force are a key communication channel between the police and the general public,” Tse said. “We certainly object to any acts calculated to interrupt our speech, or hijack this press conference.”