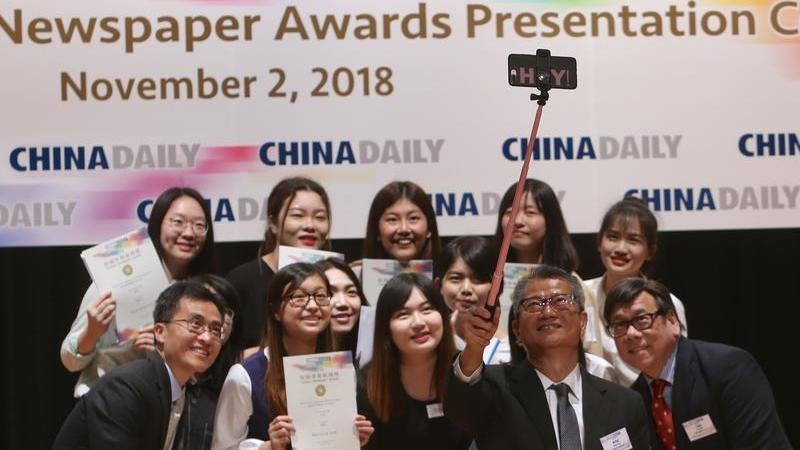 HONG KONG – The Chinese University of Hong Kong continued to shine at this year’s Campus Newspaper Awards – winning 22 prizes at the award presentation ceremony on Friday.

Launched by China Daily Hong Kong Edition in 2012, the awards - the only campus journalism competition with contestants coming from Hong Kong, Macao, Taiwan and the Chinese mainland – are in their seventh year.

Financial Secretary Paul Chan Mo-po spoke at the award presentation ceremony. Chan said it was rare to see student journalists – future talents in the media - from across the mainland, Hong Kong, Macao and Taiwan.

Reporters’ coverage of social events means a lot to society, Chan said, as they are recording history.

Chan said journalists should not simply be reporters but practice independent thinking and have the ability to research, question and analyze. This will help the public comprehend significant and complex social issues.

“No matter what you pursue as career after graduation, I hope you all will keep your original aspirations in your heart and continue to care about society.”

Also present at the ceremony, Zhou Li, editorial board member of China Daily Group and publisher and editor-in-chief of China Daily Asia Pacific, said the awards provide a platform for students with a passion for exchanging views both professionally and in daily life.

Zhou also said he appreciated the universities’ and contestants’ enthusiasm and judges’ support to the awards. 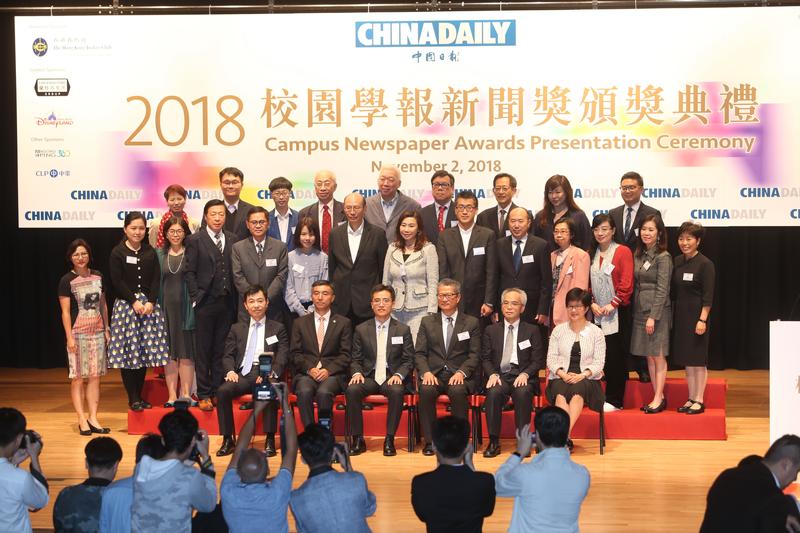 Both the number of participating universities and submissions this year hit record highs. A total of 724 submissions – 20 percent more than last year – came from 38 universities from the mainland, Hong Kong, Macao and Taiwan. They were competing for prizes in 25 categories.

The works were evaluated by about 70 judges, comprising academics, veteran journalists, officials, lawmakers and business leaders. Some 79 entries stood out.

Anthony Fung Ying-him, professor from CUHK’s School of Journalism and Communication, and He Shusi, reporter from China Daily, shared their thoughts and experiences with the student journalists.

Winner of the Best in News Reporting award, Yu Cheuk-ki, is from the CUHK. Yu’s prize-winning coverage, “Accommodating Anchor Children”, portrayed the dilemma of Hong Kong-born children whose parents are not Hong Kong residents and do not live in the city.

The coverage was a joint effort by Yu and her teammates. She thanked all members of the team, especially two from the mainland who helped interview mainland parents.

Feng Jieming, from Macau University of Science and Technology, said it was a great honor to win second place for Best in Features Photo Reporting. She said the prize had inspired her to continue to explore photography.

Kong Deqi, a postgraduate from Nanjing University, and four of his schoolmates won first prize for Best in Business News Reporting (Chinese language). He said he was impressed by the sharing session. This has made him consider pursuing a career in the media after graduation.

*Chen Zimo contributed to the story