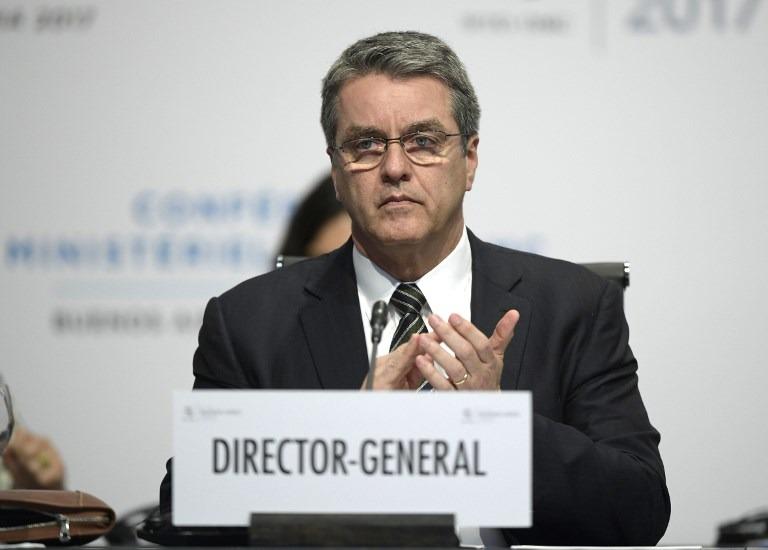 GENEVA - World Trade Organization (WTO) Director-General Roberto Azevedo on Monday called on members to avoid triggering an escalation of global trade barriers, urging them to reflect on the matter.

Azevedo was speaking at a meeting with heads of WTO delegations in response to a series of announcements from the organization's members in recent days which suggested that a range of new, unilateral trade barriers could soon be put into force.

"In light of recent announcements on trade policy measures, it is clear that we now see a much higher and real risk of triggering an escalation of trade barriers across the globe," said Azevedo.

"We cannot ignore this risk and I urge all parties to consider and reflect on this situation very carefully. Once we start down this path, it will be very difficult to reverse direction," said the WTO chief.

If US President Donald Trump's threat to slap new tariffs were to be confirmed and implemented, "it is clear that they would violate the rules of the WTO," said Macron.

"It is important in this context that the European Union (EU) reacts swiftly and proportionately within the WTO and in respect of the WTO," he told reporters at a joint press meeting at the Elysee Palaceon with Philippe Couillard, premier of Quebec, Canada.

Macron noted that Trump's plan amounted to "economic nationalism," which would lead to war and would be "a very bad response to the international environment."

Couillard said that a trade war "is not a road where we must bring the world."

The US move has sparked worldwide criticism and retaliatory intentions soon after its announcement, especially from Canada and the EU.

The EU has announced that it would adopt retaliatory measures. Media reports have identified tariffs on bourbon whisky and Harley-Davidson motorcycles, as well as filing a legal case against Washington at the WTO at potential targets in this context.

"We will not sit back and watch idly while our industry is hit by unfair measures which endanger thousands of European jobs," Jean-Claude Juncker, president of the EU Commission, said. Instead, Washington should expect the EU to act "decisively and appropriately" to defend its interests.

Azevedo, however, told the whole WTO membership in his Monday speech that "an eye for an eye will leave us all blind and the world in deep recession."

"We must make every effort to avoid the fall of the first dominoes," he said. "There is still time."

The WTO has been watching closely the situation since Trump announced the plan Thursday, with Azevedo saying in a statement on the following day that "a trade war is in no-one's interests."

On Monday, the WTO head also commented on the current situation in the organization's appellate body, specifically regarding the impasse in the selection process for new members.

In recent months, the United States has been trying to block new appointments to the appellate body, a move that could dampen its key role -- resolving disputes.

Azevedo described this as an "extremely serious and urgent concern for us all," as the dispute settlement function underpins the whole trading system.

The director-general said that members should be actively formulating and discussing solutions, and that he would be facilitating further conversations on the issue in the coming days.