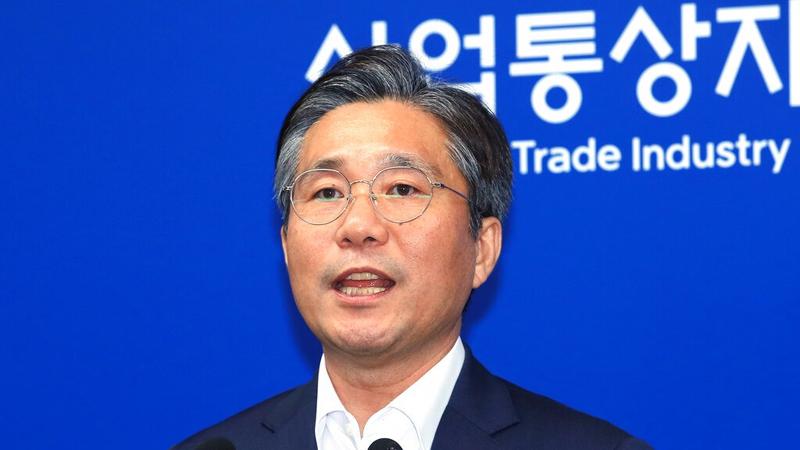 South Korean Trade Minister Sung Yun-mo speaks during a press conference at the government complex in Sejong, South Korea, Aug 12, 2019. South Korea says it has decided to remove Japan from a list of nations receiving preferential treatment in trade in what was seen as a retaliatory move to Tokyo's recent decision to downgrade Seoul's trade status. (JIN SUNG-CHUL / YONHAP VIA AP)

SEOUL - South Korea on Monday decided to remove Japan from its white list of trusted export partners after Tokyo's such removal earlier this month.

Sung Yun-mo said it will be hard to closely cooperate with a country, which violates the basic principle of the international export control system or continues to run the system inappropriately

South Korean Minister of Trade, Industry and Energy Sung Yun-mo said at a press briefing that Seoul's export control of strategic materials will be run to meet the basic principle of the international export control system.

Sung said it will be hard to closely cooperate with a country, which violates the basic principle of the international export control system or continues to run the system inappropriately.

The Seoul's revised act was slated to take effect next month after the collection of public opinion and the legislation office's deliberation on it for about 20 days.

Sung noted that if the Japanese government calls for consultation during the deliberation period, the Seoul government would be ready to accept it at any time and any place.

Japan permitted the shipment of extreme ultraviolet (EUV) photoresist to South Korea last week, the first approval of a chip material export to South Korea since its tighter export control of such materials in early July.

Japan's export curbs came in protest against the South Korean top court's rulings that ordered some of Japanese companies, including the Nippon Steel and the Mitsubishi Heavy Industries among others, to compensate the South Korean victims who were forced into hard labor without pay during the colonization.

The Korean Peninsula was colonized by Imperial Japan from 1910 to 1945.