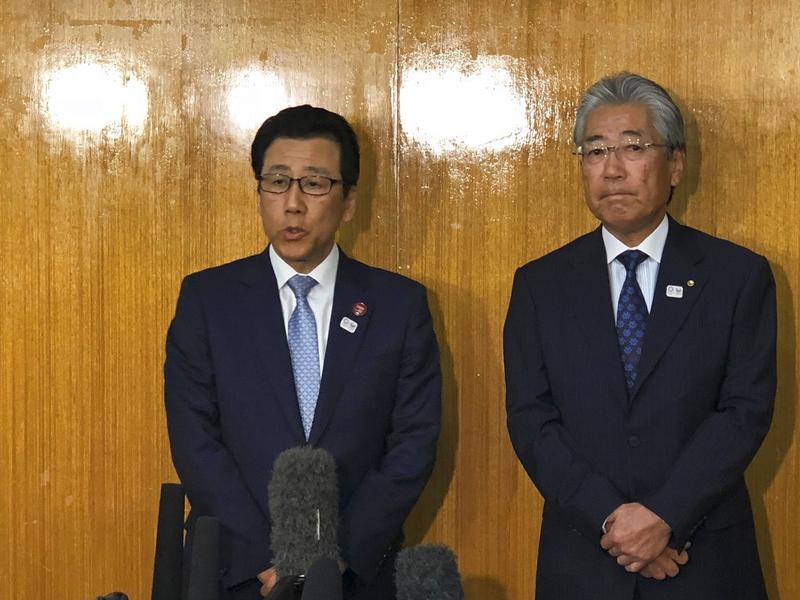 Sapporo's Mayor Katsuhiro Akimoto (left) speaks to the media, along with Tsunekazu Takeda (right), an IOC member and head of the Japanese Olympic Committee, after their meeting in Tokyo, May 14, 2018. (KOJI UEDA / AP)

TOKYO — The mayor of Sapporo and the head of the Japanese Olympic Committee are weighing a bid for the 2030 Winter Olympics, but have declined to say they'll withdraw from the contest to host the games in 2026.

Mayor Katsuhiro Akimoto and Tsunekazu Takeda, an IOC member and head of the Japanese Olympic Committee, met on Monday in Tokyo and remained vague about the bid.

"In the meeting, we did not discuss dropping our bid for 2026 and shifting it to 2030," the mayor told reporters. "But we exchanged information including the schedule of the city's planning program to decide whether we will continue our bid for 2026 or change it for 2030."

Takeda and the mayor said that planning for a high-speed rail line might be the determining factor, which "most likely will be ready by 2030"

Sapporo is one of seven bidders in preliminary talks with the International Olympic Committee about 2026. The other interested cities are: Stockholm, Sweden; Calgary, Canada; Sion, Switzerland; Milan-Turin, Italy; Erzurum, Turkey; Graz, Austria.

The IOC has not ruled out awarding 2026 and 2030 at the same meeting. In October it will reduce the field of host candidates for 2026, and pick the winning bid in September 2019.

Takeda and the mayor said that planning for a high-speed rail line might be the determining factor.

"In order to host the Olympic Games, I think the most ideal situation is to coordinate with city planning," Takeda said. "I think having the bullet trains and finishing the city planning by the time of hosting the Olympic Games is a very important factor to have successful Olympics. That is no guarantee of a successful bid for 2030, but I can say that having that kind of infrastructure will be a strong advantage for them if they decide to bid for 2030."

No matter its decision, Sapporo is long-shot for 2026.

International Olympic Committee President Thomas Bach has said he wants to return in 2026 to a traditional winter-sports venue, likely in Europe or North America.

Stockholm is viewed as an early favorite, partly because the bid is unlikely to face a public vote, which has scuttled other potential candidates in Europe.