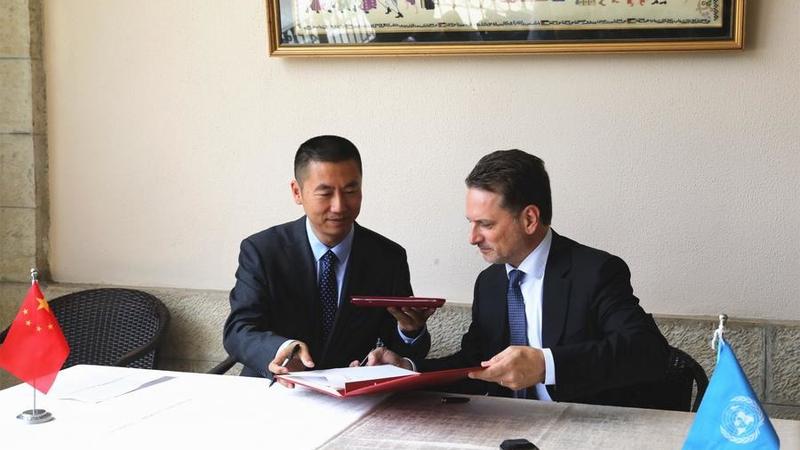 In this Aug 7, 2018 photo, Guo Wei (left), director of the Office of the People's Republic of China to the State of Palestine, and Pierre Krahenbuhl (right), the UNRWA commissioner general, sign an agreement where China is going to provide US$2.35 million to the Gaza food program in 2018. (ZHAO YUE / XINHUA)

RAMALLAH - China signed an agreement with the United Nations Relief and Work Agency for Palestinian Refugees (UNRWA) on Tuesday to provide US$2.35 million support to the Gaza food program for 2018.

Krahenbuhl said China has historically given "great attention to the issue of Palestine and has always shown attention and solidarity for Palestine refugees throughout the region."

The agreement was signed by Guo Wei, director of the Office of the People's Republic of China to the State of Palestine, and Pierre Krahenbuhl, the UNRWA commissioner general.

The UNRWA called the agreement a generous support from the Chinese government amid the agency's funding shortfall after the US cut its aid by over a half.

Krahenbuhl said China has historically given "great attention to the issue of Palestine and has always shown attention and solidarity for Palestine refugees throughout the region."

Guo reiterated China's unwavering position in supporting Palestinians through various channels, and declared that "China would like to announce a grant of 100 million yuan (US$14.64 million) in helping the economy development and improving living conditions of Palestinians."

He also said China will provide emergency humanitarian assistance to Palestinians and make further contributions to the UNRWA.

The US aid cut came after it threatened to reduce financial support to the Palestinians unless they agree to return to the negotiation table with Israel, which has been stalled for four years.

Palestinian officials said the US move comes in line with President Donald Trump's attempt to ignore the final issues of the Palestinian-Israel peace process, removing the issues of Jerusalem and the refugees "off the table," which he also wrote on twitter after he recognized Jerusalem as Israel's capital on Dec 6, 2017.

The UNRWA said recently it has succeeded in reducing deficit from US$446 million to US$217 million, but warned that it would have to cut its services because of the defici.

The UNRWA has over 700 schools serving almost 525,000 children and offers healthcare for some 3.5 million refugees through a network of 150 clinics. In addition, the agency's food and cash assistance program offers some 1.7 million dollars to extremely vulnerable refugees.

Throughout the region, the agency serves 5.3 million Palestinian refugees.

China has formerly urged the international community to help the UNRWA overcome its financial crisis in order to uphold its obligations towards millions of refugees who rely on the UNRWA services, particularly in Gaza Strip, where the humanitarian crisis deepens.