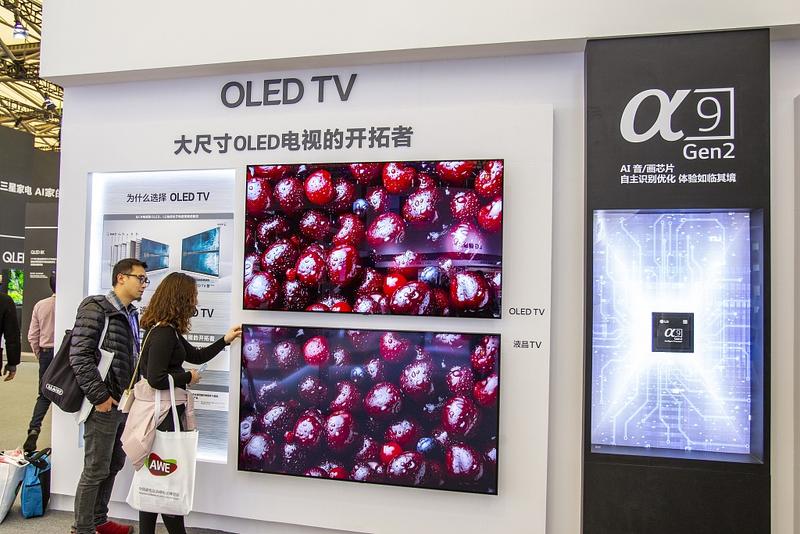 China is expected to become the world's largest market for organic light-emitting diode (OLED) televisions in the next two or three years. (PHOTO / VCG)

Wen Jianping, president of All View Cloud, a Beijing-based consultancy specializing in home appliances said the price of OLED TVs will continue to fall in the next two years, with sales rising to 380,000 units this year, and reaching 800,000 units in 2020.

The OLED TVs will be the future development direction of the TV industry, and also an opportunity for TV manufacturers to expand their profit margins

"The OLED TVs will be the future development direction of the TV industry, and also an opportunity for TV manufacturers to expand their profit margins," Wen said, adding competition in the traditional liquid crystal display (LCD) sector is fierce, with the problem of seriously homogeneous products now showing up.

OLED is a relatively new technology and part of recent innovations in display. It has a fast response rate, wide viewing angles, super high-contrast images and richer colors. It is much thinner and can be made flexible, compared with traditional LCD display panels.

Shenzhen-based TV maker Skyworth Group is banking on such cutting-edge and innovative OLED technology to conquer the domestic TV market.

Wang Zhiguo, chairman and president of Shenzhen Skyworth-RGB Electronic, a subsidiary of Skyworth Group, said the low price wars in the LCD TV market have an influence on China's high-end TV segment priced from 6,000 yuan (US$871) to 7,999 yuan. He said Skyworth will invest no less than 10 million yuan to popularize OLED technology across the nation.

Skyworth has been producing OLED TVs in partnership with South Korea's largest panel maker LG Display since 2013. Statistics from AVC showed sales of Skyworth OLED TV accounted for 46 percent of total OLED sales in the Chinese market in 2017, followed by LG (16 percent) and Sony (14.9 percent).

"The penetration rate of OLED TVs in China is relatively low, while such type of TV has become the representative of high-end TVs in the United States, Europe, Japan and other countries," said Park Changhyuk, general manager of LG Display China's promotion unit, adding that China has huge growth potential for OLED TVs.

He estimated that demand for OLED TVs in China will reach more than 2 million units within two to three years, making China the largest OLED TV market in the world.

LG Display has set up an OLED panel production plant in Guangzhou, capital of Guangdong province, and will start mass production in the third quarter of this year, manufacturing 10 million units a month in 2021.

The data also said the global shipment of OLED TVs reached 2.4 million units in 2018, an increase of 69.4 percent year-on-year.

Opportunities and challenges will coexist in the TV industry this year, said Peng Jianfeng, deputy secretary-general of the China Video Industry Association.