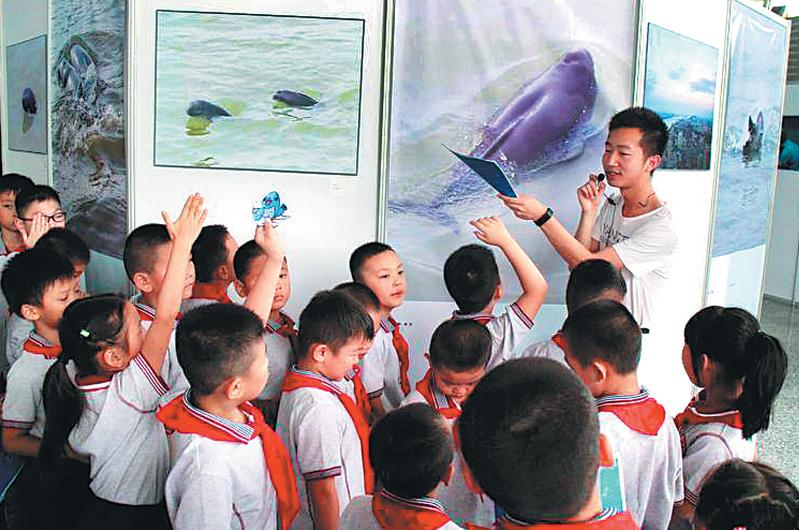 In this undated photo, a volunteer explains protection measures for the finless porpoise to primary school students in Nanjing, capital of Jiangsu province. (ZHANG KUN / FOR CHINA DAILY)

While most people rely on weather forecasts to tell them if strong gusts are on the horizon, Li Huarong can make accurate predictions just by watching finless porpoises in the Yangtze River.

"If many porpoises emerge together and a large percentage of their bodies breaches the water's surface, it indicates that strong winds are coming," he said.

"We used to refer to that phenomenon as 'finless porpoises worship the wind'," said Li, director of the finless porpoise protection association in Yangzhou, Jiangsu province.

"We had many finless porpoises in the Yangtze River. The fishermen gained enough experience to tell strong winds were coming by watching the porpoises. But now, you have to be lucky to see them."

A report found that the number of porpoises was declining by 13.7 percent a year, compared with 5 percent in 2006

Li said there are about 30 finless porpoises on the Yangzhou section of the Yangtze, especially near Sanjiangying. He and his team filmed some of the porpoises swimming with their heads above water on Aug 2, just before Typhoon Jongdari, the twelfth such weather event to hit the area this year, made landfall in the region.

Hu Chunbin, a member of the association, said it started to regularly patrol the Yangzhou section of the Yangtze in mid-July to protect the rare species, which remains in danger of extinction.

"We were so excited to see two groups of finless porpoises on Aug 2. We seldom see them during our patrols along the river.

"They look so cute with their round heads and smiling faces," Hu said. "The species has lived in the river for 25 million years. It would be a shame if it becomes extinct due to human activity."

Although governments at different levels and enthusiastic volunteers have stepped up efforts in recent years to save the animals－China's only surviving aquatic mammal in inland waters－the effect of their efforts has been limited, as shown by statistics released by the Ministry of Agriculture and Rural Affairs late last month.

Vice-minister Yu Kangzhen said that according to a survey carried out by the ministry between Nov 10 and Dec 31, only 1,012 finless porpoises are living in the Yangtze and the freshwater lakes linked to it. There are 445 in the river's main channel and 567 in the Dongting and Poyang lakes.

Between 2006 and 2012, the number of porpoises dropped by more than 50 percent, making them rarer than wild giant pandas, the ministry said.

READ MORE: Photo raises hopes for survival of the 'Goddess of the Yangtze'

According to the 2012 Yangtze Freshwater Dolphin Survey Report by the then Ministry of Agriculture, the Institute of Hydrobiology at the Chinese Academy of Sciences, the World Wide Fund for Nature and the Wuhan Baiji Dolphin Conservation Fund, in 2006 there were about 500 porpoises in the mainstream of the Yangtze, down from 1,225 in 2006.

The report also found that the number of porpoises was declining by 13.7 percent a year, compared with 5 percent in 2006.

Other than the baiji dolphin, the finless porpoise is the only freshwater mammal to have been found in Asia's longest waterway. While the baiji dolphin, nicknamed "Goddess of the Yangtze River", was declared functionally extinct in 2007, the finless porpoise, nicknamed "Panda in the Water", has been listed as critically endangered by the International Union for Conservation of Nature.

Dong Jiahe, director of the resources and environment department at the Jiangsu Ocean and Fisheries Bureau, blamed the decline in the numbers mainly on human activities, including water pollution, shipping industry development and overfishing.

Dong and his team took part in the survey by the Ministry of Agriculture and Rural Affairs and led investigative work on the Yangtze in Jiangsu.

"The species is still in extreme danger and human activities can hurt the mammal even further," he said. "More than 20 finless porpoises were found dead due to human activities in the first half of this year." 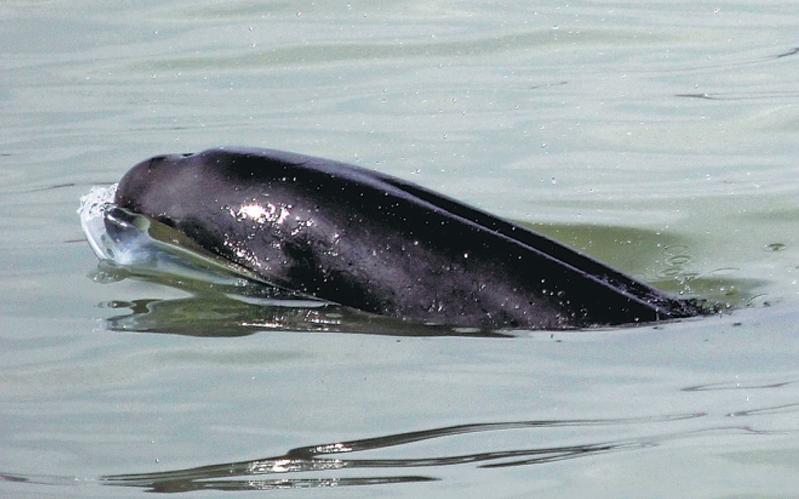 This undated photo shows a porpoise swimming. A survey has found there are 1,012 finless porpoises in the Yangtze and the freshwater lakes linked to it. (YANG GUANG / FOR CHINA DAILY)

Yang Guang, a professor from the School of Life Sciences at Nanjing Normal University, said human activities pose most of the dangers faced by the mammals.

"Overfishing leads to food shortages for the porpoises. Construction along the river changes the topographic features and shrinks their habitat, while the propellers and noise from passing ships can cause accidental deaths."

To establish a better protection mechanism, Jiangsu province has drawn up a protection plan from 2016 to 2026 to stabilize the number of the porpoises in 10 years

"Nanjing is China's only city where these mammals can be observed in the downtown area. About 12 to 14 porpoises, divided into two groups, can regularly be seen near the Third Nanjing Yangtze River Bridge," he said.

READ MORE: Optimism rises over fate of the finless porpoise

"There were only about 20 finless porpoises in Nanjing several years ago," he said. "The city has established five observation stations to closely monitor and protect the porpoises. We want to know more about their behavior to draw up better protection plans."

According to the provincial ocean and fisheries bureau, the number of porpoises living in the Nanjing section of the Yangtze has risen notably.

During a 21-day, 2,000-km expedition on the river last year, researchers identified 321 finless porpoises, with some appearing repeatedly in the Nanjing section of the river.

The bureau also said that about 30 porpoises are living in the Yangzhou section of the Yangtze.

The team consists of six members. The former professional fishermen have become full-time porpoise patrollers, and all live in Yanjiang Village near the Yangtze and know the area well.

Li, director of the finless porpoise protection association in Jiangdu, said this was one of the moves made by the ministry to switch from being an aquatic animal catcher to aquatic animal protector. It could also help to address a labor shortage in the fishery department and raise public awareness of animal protection. 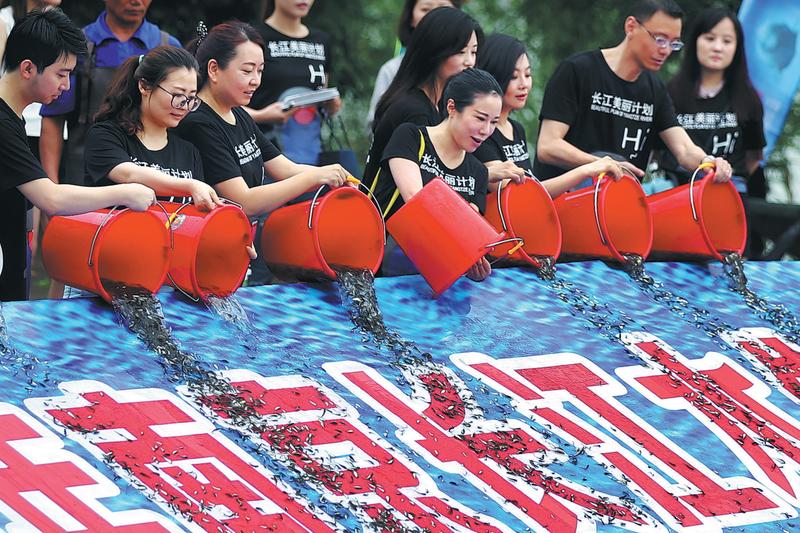 In this undated photo, Nanjing residents send various types of young fish into the Yangtze River to restore the food chain by increasing the fish population, as part of a campaign to protect the finless porpoise. (PHOTO / CHINA NEWS SERVICE)

Yang, the Nanjing Normal University professor, said the increased attention paid by the government to porpoise protection, along with intensified measures, have improved the living environment for the species.

"To establish a better protection mechanism, Jiangsu province has drawn up a protection plan from 2016 to 2026 to stabilize the number of the porpoises in 10 years."

Liu Jun, deputy director of Nanjing Ocean and Fisheries Management Department, said the city government has also invested 20 million yuan (US$2.9 million) to send various types of young fish into the Yangtze to restore the food chain by raising the fish population.

"We allocated 29.7 million yuan to buy 312 fishing boats, nets and other kinds of fishing gear from the fishermen," Liu said. "We arranged work for 128 fishermen and stopped them fishing near the Third Yangtze River Bridge in 2017."

Liu added that the city's public security and maritime departments have worked together to crack down on illegal fishing, and monitor parts of the Yangtze strictly to protect the porpoises.

"The government has made efforts to publicize the importance of porpoise protection," Liu said. "We often receive reports from locals who have witnessed illegal fishing that might endanger the porpoises."

The Ministry of Agriculture and Rural Affairs has helped to set up eight nature reserves for the porpoises along the Yangtze along with two large freshwater lakes.

The ministry is also working with the National Forestry and Grassland Administration on a proposal to the State Council, China's Cabinet, to upgrade the finless porpoise to a Category 1 species for national protection.

Guo Jun contributed to this story.