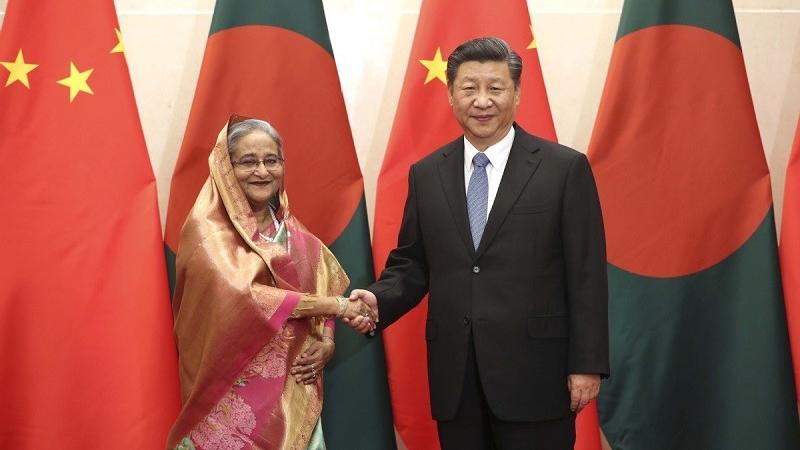 Xi made the remark while meeting with visiting Bangladeshi Prime Minister Sheikh Hasina at the Diaoyutai State Guesthouse in Beijing.

There is great potential for China and Bangladesh to enhance cooperation, Xi said, adding that the two countries should promote cooperation in digital economy and jointly build the Digital Silk Road.

Xi pointed out that since his state visit to Bangladesh in 2016, bilateral cooperation has entered a new stage of rapid development and has injected new impetus into the economic development of both sides and brought benefits to both peoples.

During the meeting, Xi urged the two countries to develop their traditional friendship and strive for cooperation and common development

Noting that both nations are at critical periods of their development, he said that strengthening and developing the China-Bangladesh strategic partnership of cooperation will not only meet the interests of both countries but also contribute to the prosperity and stability of Asia and the openness of the world.

During the meeting, Xi urged the two countries to develop their traditional friendship and strive for cooperation and common development.

Xi highlighted the importance of high-level communication in guiding the exchanges of all areas. The two countries should maintain exchanges in government departments, legislative authorities and political parties and reach more consensus on bilateral ties, he said.

China appreciates Bangladesh's support in issues related to the country's core interests, Xi said, adding that China will continue to support Bangladesh as always to safeguard national sovereignty, develop a path that fits the country's situation and maintain political and social stability.

Bangladesh cherishes the bilateral friendship made by the leaders of the elder generation, she said, adding that Bangladesh firmly supports the one-China policy.

Hasina expressed gratitude for China's support for the development of her country, saying that Bangladesh expects China to continue supporting the South Asian nation's development.

Hasina said that Bangladesh would like to learn from China's experience of governance, proactively participate in jointly building the Belt and Road and promote the building of the Bangladesh-China-India-Myanmar Economic Corridor.

On Thursday, China and Bangladesh signed a number of agreements focused mainly on power generation and economic cooperation, with Premier Li Keqiang and Hasina witnessing the signings.