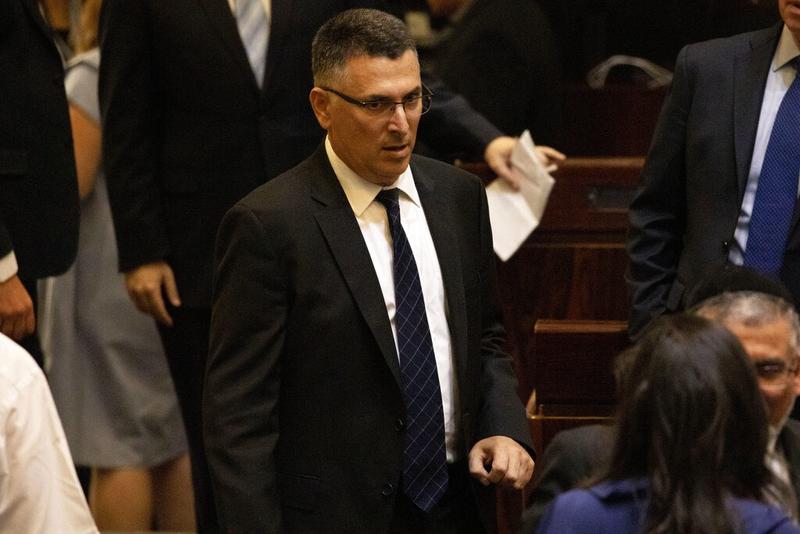 In this Oct 3, 2019 photo, Gideon Saar, attends the swearing-in of the new Israeli parliament in Jerusalem. With a simple tweet, Gideon Saar did what no Israeli politician from the ruling Likud party has done in more than a decade -- openly challenge Prime Minister Benjamin Netanyahu. (PHOTO / AP)

JERUSALEM — With a simple tweet, Gideon Saar did what no Israeli politician from the ruling conservative party has done in more than a decade — openly challenge its chief, Prime Minister Benjamin Netanyahu.

The brazen move against the long-serving Israeli leader has solidly positioned the 52-year-old Saar as the Likud party's leading candidate to replace Netanyahu, who is fighting for his survival amid a pending corruption indictment and post-election political paralysis.

A former aide and senior Cabinet minister under Netanyahu, Saar has long been considered a rising star in Likud and one of the lone independent voices in a party that has, in general, blindly followed its leader

A former aide and senior Cabinet minister under Netanyahu, Saar has long been considered a rising star in Likud and one of the lone independent voices in a party that has, in general, blindly followed its leader.

But that has begun to change. Netanyahu failed in two elections this year to capture a parliamentary majority, and the possibility of a criminal indictment in the coming weeks has hindered his efforts to head a coalition government. Seeking to solidify his status, the premier last week floated the prospect of a snap internal leadership primary in which he expected Likud to endorse him. But he quickly backed down after a two-word Twitter response from Saar: "I'm ready."

It was a risky maneuver in a party that fiercely values loyalty and has had only had four leaders in its 70-plus-year history. Saar followed it up with a more detailed tweet clarifying that he was not out to topple the prime minister, as Netanyahu has long claimed. Still, Saar left no doubt about his ultimate objective.

"No one is denying the prime minister's role as chairman of the Likud," Saar wrote on Twitter. "When there is a race for leadership of the party — as the prime minister himself initiated a few days ago — I will run."

For Saar, it was a move long in the making. A former lawyer and journalist, he was first brought into politics 20 years ago by Netanyahu, who made him his Cabinet secretary during his first term in office.

Saar then established himself as a staunch nationalist who opposed Israel's 2005 withdrawal from the Gaza Strip and resisted the prospect of a Palestinian state. He quickly rose in the Likud ranks, twice finishing first in internal elections for its parliamentary list and enjoying successful stints as education minister and interior minister after Netanyahu returned to power in 2009.

But as with others in Likud who saw their popularity rise, he too began to be perceived by Netanyahu as a threat. Their falling out was capped by Saar's active role in getting Netanyahu's nemesis Reuven Rivlin elected president, over the prime minister's objections.

With his advancement stunted, Saar abruptly quit politics in 2014 to spend more time with his new wife, Israeli TV anchor Geula Even, and their young children.

He made his comeback this year, chosen by Likud members for a senior position on the party's list of candidates in parliamentary elections. While campaigning hard for Likud, Saar has been its only top official to occasionally flaunt Netanyahu — resisting calls to legislate immunity for the prime minister and attending a media conference Netanyahu had called to boycott.

"Gideon has no fear and he's straight as an arrow," said Shimshon Shoshani, Saar's former director general in the Education Ministry.

Though he didn't share Saar's right-wing ideology, Shoshani said they worked in tandem on bold education initiatives and he saw a public servant fit to lead the country.

"He's a man who has a vision, and he knows how to translate that vision into concrete plans," said Shoshani, an 82-year-old veteran of the Israeli bureaucracy.

Despite his hard-line positions, Saar enjoys good relations across the political spectrum and is perceived as a potentially more comfortable partner for a unity government with the rival Blue and White party, which emerged as the largest party in last month's election.

But neither it nor the Likud control a parliamentary majority. A coalition government between the two parties appears to be the best way out of the deadlock, but Blue and White's leader, former military chief Benny Gantz, refuses to sit with Netanyahu because of his expected indictment on corruption charges.

Saar's independent streak has drawn frequent fire from Netanyahu's lackeys, and Netanyahu himself last year accused Saar of orchestrating a "putsch" with Rivlin to unseat him.

Under Israeli law, if neither Netanyahu nor Gantz can form a coalition, a majority of lawmakers could theoretically choose an alternative as prime minister. Saar is widely seen as the politician most capable of winning such support.

With a primary election seemingly off the table for now, Netanyahu is talking about convening a Likud functionary body to stipulate he's the party's sole candidate for prime minister.

Netanyahu's office has refused to comment about his plans. However, Limor Livnat, a former Likud Cabinet minister and Netanyahu ally, decried the conduct against Saar as a show of weakness.

"Instead of cultivating potential successors, Netanyahu has neutralized every Likud member who has shown any independence and has surrounded himself with yes-men," she wrote in the Yediot Ahronot daily. "Since when is announcing one's candidacy in a party primary construed as a plot against the incumbent party chairman?"

Eran Davidi, a long-time confidante of Saar's, said Saar and Netanyahu have not met in five years and the enmity was likely to cost Saar a Cabinet post if Netanyahu succeeds in forming another government. But if he fails again, and the country heads to an unprecedented third election within a year, Davidi said he expected the long-hidden cracks to finally emerge within Likud.

While others have expressed interest in heading the party after Netanyahu voluntarily steps aside, Saar remains the only one who doesn't intend to wait till that happens.

"He has ambitions and he has said that he came back to politics to lead the country," Davidi said. "Eventually, the Likud members will appreciate that he had the courage to run. That's the qualities of a leader."