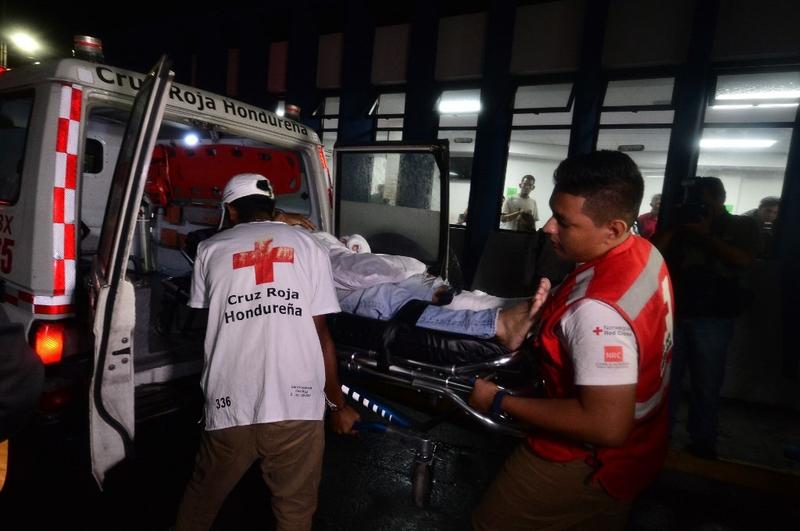 Members of the Honduran Red Cross enter the Hospital Escuela Universitario with one fan injured during the riot at the Tiburcio Carias Andino stadium in Tegucigalpa, Aug 17, 2019. (ORLANDO SIERRA / AFP)

TEGUCIGALPA/MEXICO CITY — Three people were killed and at least 10 injured in riots Saturday night before a football match between rival teams after suspected fans attacked a bus carrying one of the two teams to the game, wounding three players, officials and the team said.

Fans of the Olimpia and Motagua football teams, bitter local opponents, rioted outside Tegucigalpa's National Stadium after a crowd of people believed to be rival supporters intercepted and vandalized a bus transporting Motagua players, police said.

"Three people died and seven were shot and stabbed. One of them is a boy. Three of the injured adults are in critical condition," Laura Schoenherr, a spokeswoman for the state University School Hospital, told Reuters. The riot broke out after crowds threw stones at the bus carrying members of the Motagua team, sending shards of window glass at the players inside, according to the Motagua club, which blamed members of the Ultra-Faithful Olimpia fan club.

"This has to be severely sanctioned by the corresponding authorities," the Motagua club said in a tweet. "Reprehensible and lamentable," it added in another tweet.

Three of the players - Emilio Izaguirre, Roberto Moreira and Jonathan Rougier - were transferred to hospital with facial wounds, the Motagua club said.

Accompanying video purported to show players in blue uniforms standing in the still-moving bus beside smashed windows and a glass bottle rolling on a seat. "A rock! A rock! There! There!" someone shouts as a siren blares.

A statement from the Ministry of Security confirmed the bus attack and said its perpetrators wore the uniforms of the rival Olimpia team. The ministry added in the statement that it had set up "five rings of security" ahead of the game.

The National Football League suspended the game after the incident. It had expected some 20,000 fans to attend.

The president of Olympia club, Rafael Villeda, told local press that he would meet with the leadership of the National League and Motagua to decide on the future of the game.