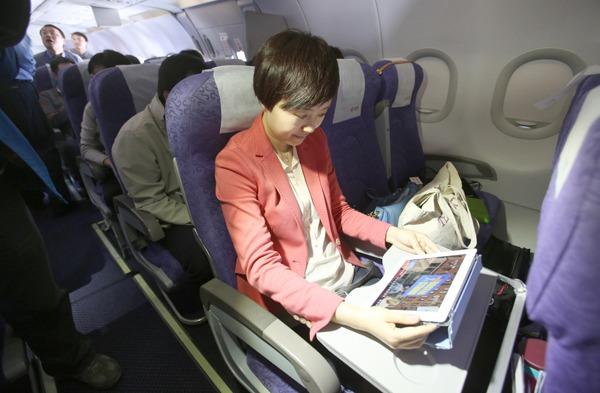 A passenger browses the internet on a flight from Beijing to Chengdu in Sichuan province. (LI DONG / FOR CHINA DAILY)

BEIJING — China has seen new progress in promoting inflight internet access, with 13 airlines capable of providing the service, according to civil aviation authorities.

As of the end of June, around 340 airplanes from the 13 Chinese airlines had a cabin wireless network service, the Civil Aviation Administration of China (CAAC) said.

Among them, nearly 180 airplanes were capable of giving passengers air-to-ground inflight internet connectivity.

China has seen continuous development in its civil aviation sector. In the first half of 2019, the sector handled a total of 320 million passenger trips, up 8.5 percent year on year

Chinese airlines had provided inflight internet access services to a total of 6.18 million passengers by the end of June, according to the CAAC.

China has seen continuous development in its civil aviation sector. In the first half of 2019, the sector handled a total of 320 million passenger trips, up 8.5 percent year on year.

The CAAC has made inflight internet connectivity a major part of the industry's service upgrading, which is key to the sustainable growth of the country's civil aviation industry.

Besides inflight internet access, the country's civil aviation authorities are also encouraging airlines and airports to enhance their efficiency and service performance through advanced technologies.

Introduction of advanced technologies, such as facial recognition, self check-in and RFID tech in luggage tracking, are also anticipated to facilitate the safety and efficient operation of the industry.

In 2018, the country's civil aviation industry handled a total of 610 million air passenger trips, up 11.4 percent year on year.

China is now the world's second largest civil aviation market. The latest forecast of the International Air Transport Association (IATA) showed that China is expected to become the world's largest by the mid-2020s.