No violence - The voice gets louder! 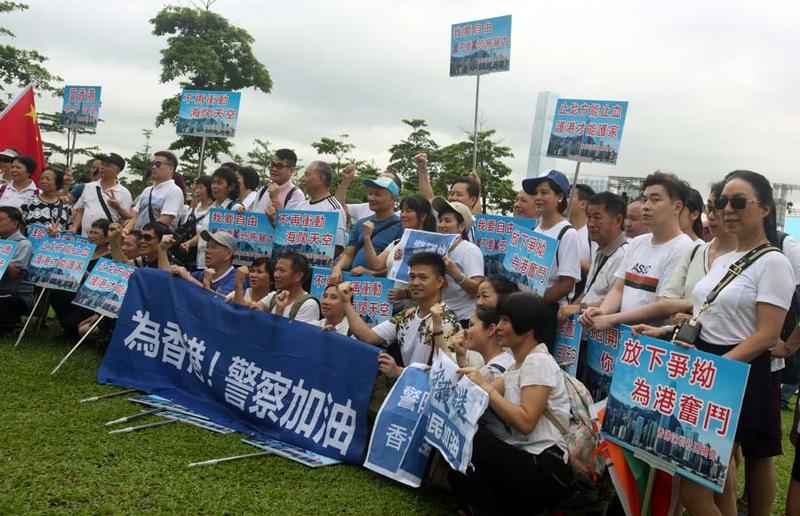 Residents hold placards in the "Safeguard HK" rally at Tamar Park, Hong Kong on July 20, 2019 to call for an end to violent protests in the city. (CHINA DAILY)

The recent wave of escalated and unprecedented violence by radical protesters has driven more people forward to condemn such unlawful behavior and demand that law and order be speedily restored in the community.

Hundreds of thousands of people from all sectors of life turned up at a rally at Tamar Park in Admiralty on Saturday to say no to violence and support the HKSAR government and the police - almost doubling the number of participants who attended a similar rally nearly three weeks ago.

An estimated 316,000 people defied the rainy weather to express their support and gratitude to the police force in dealing with the wave of protests against the now- suspended extradition bill and appeal for peace and order.

The participants, mostly dressed in light-colored clothes, were passionate and energetic, chanting slogans and waving signboards and banners along with the national and HKSAR flags.

Almost all the participants did not wear face masks or helmets, in contrast to the radical protesters who had to hide their identities from the police.

The rally was in response to the growing trend of extreme violence by guerilla-styled protesters - the latest being on July 14 when hundreds of demonstrators, hurling bricks, bottles and umbrellas, clashed with police inside the New Town Plaza in Sha Tin.

Thirteen police officers were injured in that protest and taken to hospital, while forty-seven protesters were arrested.

At the Tamar rally on Saturday, the atmosphere was peaceful, calm and rational. It began at 5 pm as prominent politicians, academics, celebrities and representatives of ethnic minority groups were invited onto the stage to share their thoughts and wishes for Hong Kong.

Tam Yiu-chung - the SAR’s sole deputy to the National People’s Congress Standing Committee - thanked the crowd for taking the time and braving the inclement weather to show their solidarity in safeguarding the city they love so much.

“We must not tolerate any action that undermines Hong Kong and the principle of ‘one country, two systems’,” Tam said, drawing loud cheers of approval from the crowd.

There was also a roar of support when Professor Lui Ting-ming of the Hong Kong University of Science and Technology urged the police to arrest and prosecute violent protesters breaking the law.

“They're not righteous. They’re criminals," he said.

Entrepreneur Allan Zeman said Saturday’s rally could send an important message to the world that Hong Kong people could end their differences and work together to resolve problems.

Wong Hei-yin from the trade sector said Hong Kong people who believe in the power of cooperation built on mutual respect and tolerance should make themselves heard loud and clear in a peaceful and rational way.

“We can’t let violent protesters hijack public opinions, protesters who attack the government and undermine the rule of law while hiding their identities behind face masks and helmets,” Wong said.

At the end of the rally, a group of youth representatives read out a declaration appealing to the public never to resort to violence, to talk instead of to argue, and to unite instead of to fight.

Amid a chorus of Under Below the Lion Rock —– a symbolic local song glorifying the “can-do” spirit of Hong Kong —-- the rally ended peacefully at about 7 pm.