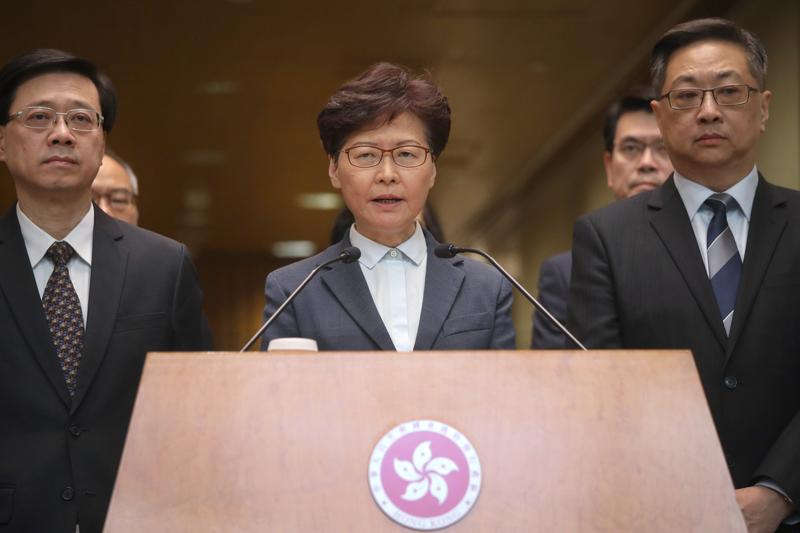 In a tough and uncompromising tone, top officials of the Hong Kong Special Administrative Region on Monday denounced the siege of the liaison office by radical protesters and the Yuen Long attacks on Sunday night.

They cautioned that violence would only breed more violence and the city and its people would suffer as a result. The officials said the police would spare no efforts in tracking down the offenders and bringing them to justice.

We call on all Hong Kong residents to safeguard the city’s law and order and never resort to violence.

Chief Executive Carrie Lam Cheng Yuet-ngor, together with all principal officials of the SAR government and the Commissioner of Police Lo Wai-chung, met with the media on Monday afternoon in the aftermath of an outburst of violence that shocked the city.

A peaceful protest against the now-suspended extradition bill on Sunday afternoon turned ugly at night when a group of radical protesters besieged the Liaison Office of the Central People’s Government in the Hong Kong Special Administrative Region. They defaced the national emblem mounted at the entrance and sprayed offensive graffiti on the walls.

Lam said such vandalism was a blatant defiance to the nation’s sovereignty and a direct challenge to the “one country, two systems” principle. The act has done great damage to the special administrative region which is governed by the principle and deeply hurt the sentiments of the people in Hong Kong and on the Chinese mainland.

In addition, Lam also strongly denounced the “astonishing and outrageous” attacks in Yuen Long, a densely populated region in New Territories. On Sunday night, a group of men in white shirts, some wearing face masks, assaulted bystanders and commuters at the Yuen Long metro station with bamboo sticks and metal poles.

The attackers showed a total and complete disregard of law and order when they indiscriminately assaulted people on site. What these attackers did was appalling and totally unacceptable, Lam noted, adding she has requested the police chief to conduct extensive and in-depth investigation into the incidents and bring the offenders to justice.

The SAR government has zero tolerance to any kind of violence carried out at any time, anywhere and toward any people. “We call on all Hong Kong residents to safeguard the city’s law and order and never resort to violence”, Lam concluded.

Commissioner of Police Lo pledged that the police investigation will begin immediately and the force would do its utmost to arrest the offenders.

He also dismissed allegations that the police was partial to the attackers in Yuen Long metro station.

The police force is irreconcilable with any kind of violence, Lo stressed. Until press time, the police announced that five men in connection with the attacks in Yuen Long have been arrested.

The non-official members of the Executive Council, the policy-making advisory body, also met the media.

Ex-Co convener Bernard Charnwut Chan said all non-official members of the council denounced the violence in Hong Kong Island and Yuen Long on Sunday night, adding it was “heartbreaking” to see the widening social rift that led to escalating violence in the city.

Chan stressed the city should not allow violence to spread. “We urge the Hong Kong government, together with the police, to address the issue immediately,” he said.