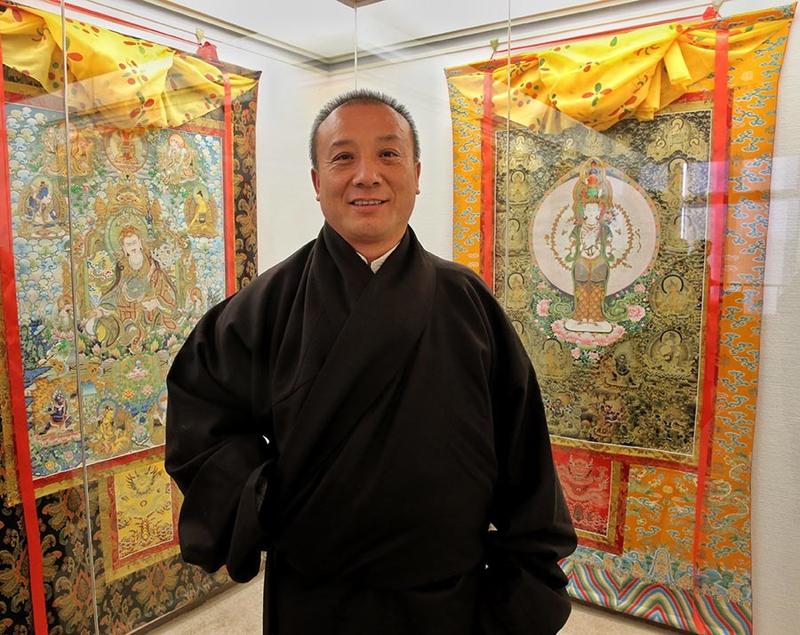 UNITED NATIONS — After winding up a cultural exchange event recently held at the United Nations headquarters in New York, Nyangbon, a well-known thangka painter from northwest China's Qinghai Province, developed a new thought -- all people across the world should put more efforts in safeguarding world peace.

The artist, who only has a given name, said his latest UN trip further fortified his belief that he should try his utmost to bring more harmony and peace to the world by dramatically promoting thangka paintings on as many international occasions as possible.

At the invitation of Cindy Ye, president of American New Line Express Corp., the largest package express delivery company run by a Chinese American, Nyangbon and Bradley Theodore, one of the most recognized emergent artists in the United States, recently met at the UN, and exchanged, in a relaxing and jovial atmosphere, thoughts on artistic creations and art works.

"Mr. Nyangbon's paintings stunned me during my visit to his studio in Beijing last year," said Theodore.

The thangka pieces by Nyangbon (above) and Shaurjo (below) are among the works on show at the ongoing display in Beijing. (JIANG DONG / CHINA DAILY)

While making preparations for the art works exchange event at the UN with Theodore, Nyangbon learned that the UN had been troubled by the flare-up of disputes and conflicts in some countries and regions, arrears of UN budgetary arrangements by many member states and serious trust deficit among countries.

Nyangbon said he is a firm believer that political dialogues and consultations are important means to solve disputes and conflicts, but art, in many cases, "works wonders."

The wonderful art works of Mr. Nyangbon have brought a sort of refreshing spring breeze to the UN thanks to the connotations of peace and harmony embedded in his paintings

"The wonderful art works of Mr. Nyangbon have brought a sort of refreshing spring breeze to the UN thanks to the connotations of peace and harmony embedded in his paintings," said Jack Rosen, president of the American Jewish Congress, at the art works exchange event.

"This is one of the best ways for Americans to better understand China and the Chinese people," said Rosen.

Justin Cole Ouimet, a friend of Bradley Theodore, said that "the styles of the two artists are totally different, but their aspirations are the same -- making this world a better place to live with their great artistic creations."

Noting that an excellent thangka painter is, in the first place, a devout practitioner, Nyangbon said that he starts each morning by reciting the sutras to begin a tranquil day.

"With day-to-day recitations, the Buddhist principles are being imperceptibly transferred to my spiritual world. As a result, this kind of peaceful state of mind will make my painting brush a peaceful one as well," he said.

"Before starting to paint, I would, first of all, wash my hands, and then sit cross-legged, keep my mind in a respectful, silent and undistracted state," said Nyangbon.

"How peaceful you are and how much passion and love you are pouring into the painting determine the value of the art works," said Nyangbon. "Every piece of my art works is a perfect dialogue between the flesh and the spirit."

"Only by doing so can we present a meticulous and grand world with our painting brushes," he noted. 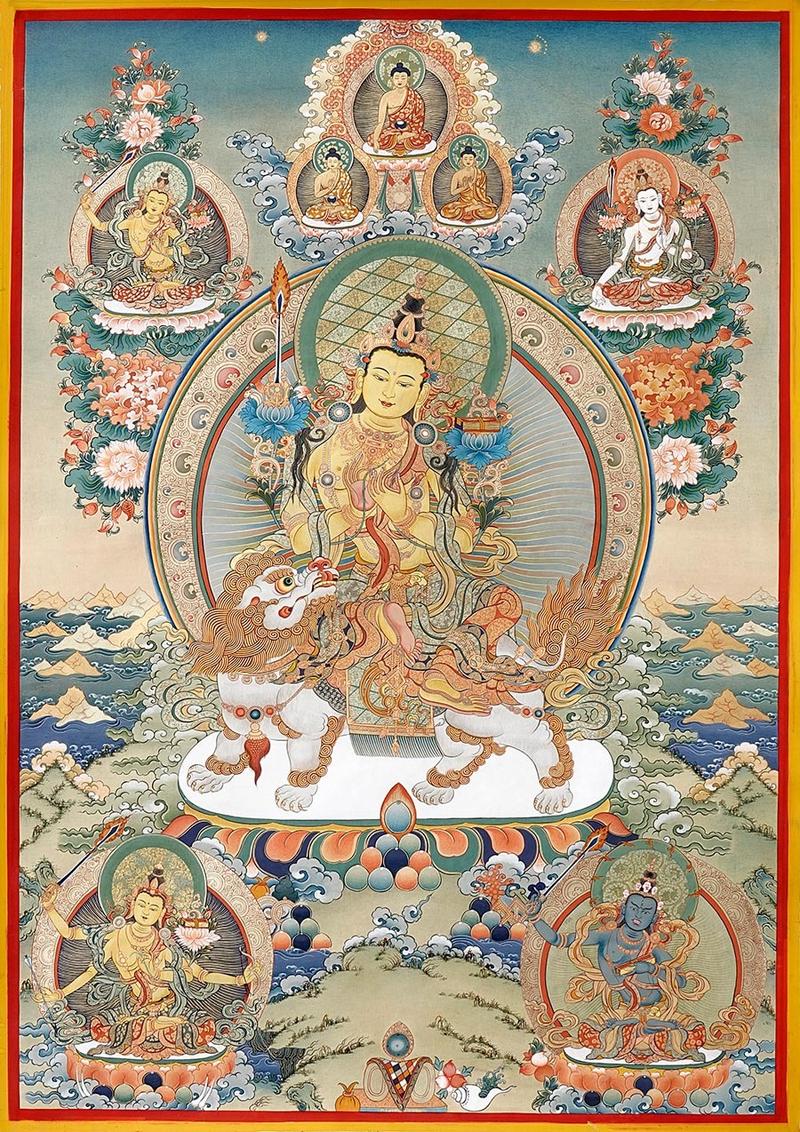 An exhibition of 30 thangka paintings by master painters from Qinghai is now on at the National Art Museum of China. (JIANG DONG / CHINA DAILY)

The UN is not an unfamiliar place for Nyangbon who, together with famous pianist Lang Lang, was warmly hosted by former UN Secretary-General Ban Ki-moon in 2014. The gracious and scholarly Ban and what the UN had been doing then to help improve the livelihoods of the human being had left Nyangbon a deep impression.

A state-level master of arts and crafts from China's Qinghai Province, Nyangbon began learning thangka at the age of 12 and is regarded as an inheritor of the art of Regong thangka painting.

Thangka, also known as tangka, is transliterated from the Tibetan pronunciation. It refers to a mounted scroll painting that is hung in a monastery or a family altar and sometimes carried by monks in religious events.

Nyangbon now runs the Regong Painting Academy with many students from poor families. The academy he founded in 2006 now has become a major education base for thangka painters. 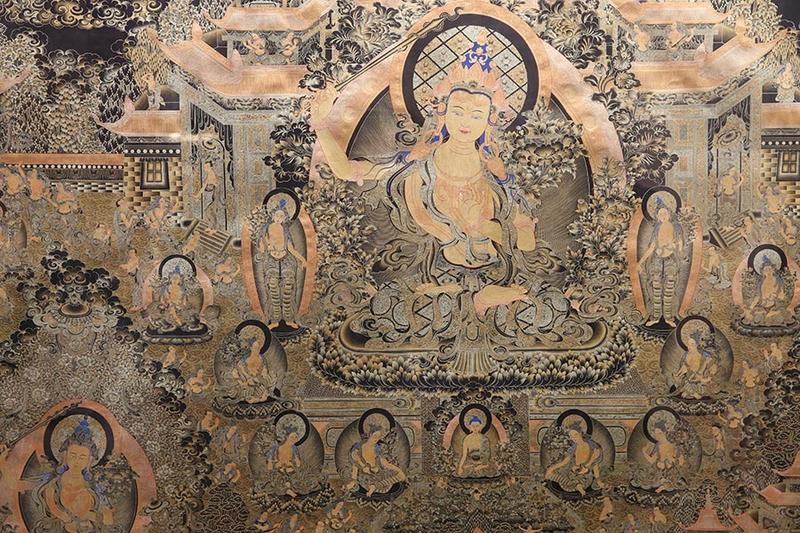 An exhibition of 30 thangka paintings by master painters from Qinghai is now on at the National Art Museum of China. (JIANG DONG / CHINA DAILY)

Nyangbon said that his apprentices are typically middle school graduates, because nine-year education is compulsory in China, and he believes education helps artisans become accomplished artists.

Regong art was made part of the UNESCO's list of intangible cultural heritage in 2009.

"Thangka belongs to China and the world as well. As an inheritor of this art form, it is my responsibility to promote and carry forward this unique art," he said.

Five years ago, Nyangbon launched an ambitious project to paint a 1,000-meter-plus scroll that shows the development of Tibetan Buddhism and a wide spectrum of the Tibetan culture.

Nyangbon, the scroll's chief designer and lead painter, has been working with dozens of senior thangka painters, and so far, the team has completed more than 600 meters of the painting.

"I wish I could bring the giant painting to the UN when it is finished. What I really want to bring to the world is not merely the painting, but the spirit behind it," said Nyangbon.