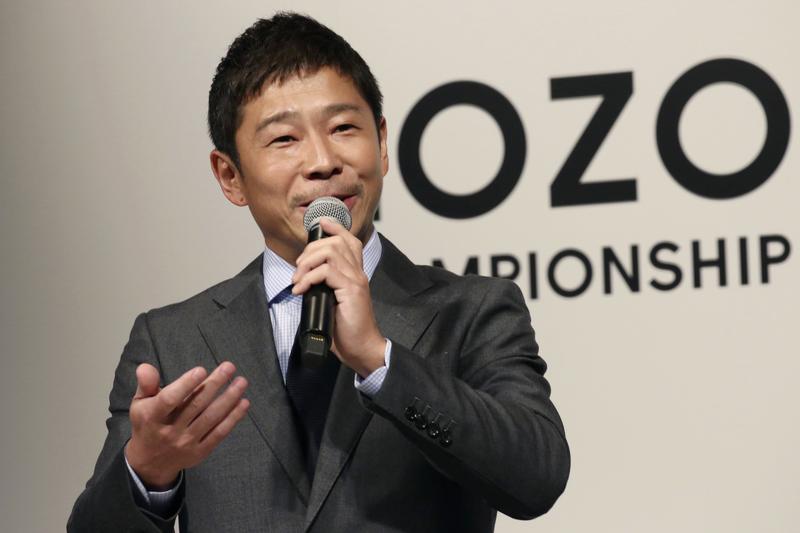 TOKYO — Yahoo Japan Corp is putting up a tender offer, estimated at 400 billion yen (US$3.7 billion), for Zozo Inc, a Japanese online retailer started by a celebrity tycoon.

Yahoo Japan announced the plan Thursday, which includes a business alliance with Zozo.

Zozo Chief Executive Yusaku Maezawa is known for lavish spending on artworks by Jean-Michel Basquiat, a Stradivarius violin and a future trip to the moon.

Our initial impression is positive for both companies

Maezawa, who owns nearly 37% of the company, will step down and sell nearly 93 million shares of his more than 112 million shares, according to the plan.

Yahoo Japan will own up to 50.1% under the tender offer, set for early October, it said.

Maezawa has drawn a great deal of attention in the relatively conservative Japanese business world.

He started out running an import CD business and played in a rock band before he started his online fashion business with a shopping site called Zozotown when online retailing was still new in Japan.

Recently he drew attention for his Zozosuit, a so-called wearable technology that takes body measures with a software application so that clothes will be made to fit. He was also planning to ride on Elon Musk's Space X rocket.

Zozo, whose tagline is: "Be unique. Be equal," said in a statement that, by becoming a subsidiary of Yahoo Japan, it will gain stability and a solid partner.

Succeeding Maezawa at Zozo's helm is Kotaro Sawada, who joined the company about 10 years ago after working at Japanese telecommunications giant NTT Data Corp.

Hiroko Sato, analyst for Jeffries, said the deal looked good for both sides as Yahoo has a chance to gain more shoppers to its online retail services by acquiring Zozo, especially younger consumers.

The move is not without risks as it faces in Japan formidable competition from Rakuten, she said.

"Our initial impression is positive for both companies," she said.