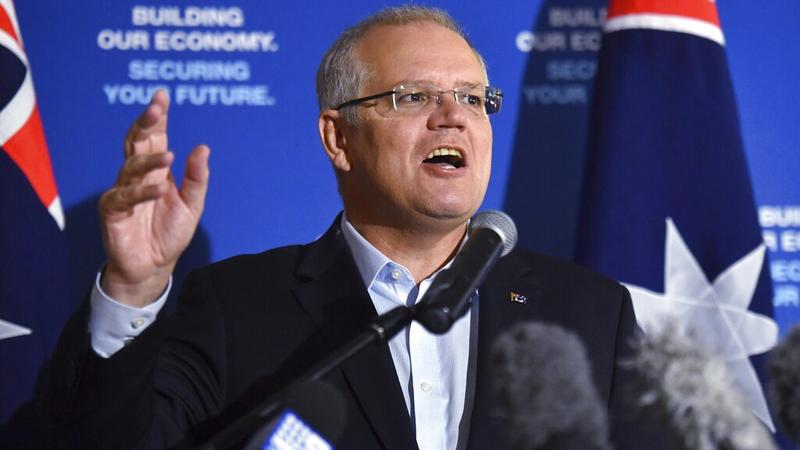 MELBOURNE - A 24-year-old woman who struck Australian Prime Minister Scott Morrison with an egg on Tuesday as he campaigned for a May 18 general election has been charged with assault, police said.

Security guards swiftly pounced on the protester, who was wearing a beanie and casual clothes, and dragged her away moments after the attack.

"The prime minister was attending an event at Albury Entertainment Centre, when a woman approached him from behind and allegedly struck him with an egg to the back of his head," New South Wales police said in a statement.

Police, who initially said the woman was 25, said they had been arrested her but they did not identify her nor give any details about her motive.

She was charged with common assault and drug possession, after police found cannabis on her. The woman was released on bail and ordered to appear in court on May 27.

Morrison rubbed his head briefly after being grazed by the egg, which did not break, and then helped Margaret Baxter, an elderly woman who was pushed to the floor in the scuffle, television images showed.

No injuries were reported, the police said.

"We will stand up to thuggery whether it's these cowardly activists who have no respect for anyone, or militant unionists standing over small businesses and their employees on work sites," Morrison tweeted after the incident.

Later, he joked when asked about it, saying he did not want to "over-egg" it.

"Just because you have a difference of view to someone, doesn't mean you have to engage in these sorts of ugly types of protests ... We have to learn to disagree better," he told reporters, referring also to recent protests by vegans against farmers.

"This is appalling and disgraceful behaviour," he told reporters.

The incident occurred during a visit by the prime minister to Albury, a New South Wales constituency where an independent candidate is the bookmakers' favourite as rural voters desert the government.

The woman protester later told reporters that her action "speaks for itself" and referred to Manus Island, in Papua New Guinea, where Australia has long detained refugees, according to a reporter with the Australian newspaper.

In March, a teenager smashed an egg onto the head of a controversial right-wing Australian lawmaker who had blamed New Zealand's mosque shootings on its immigration program.