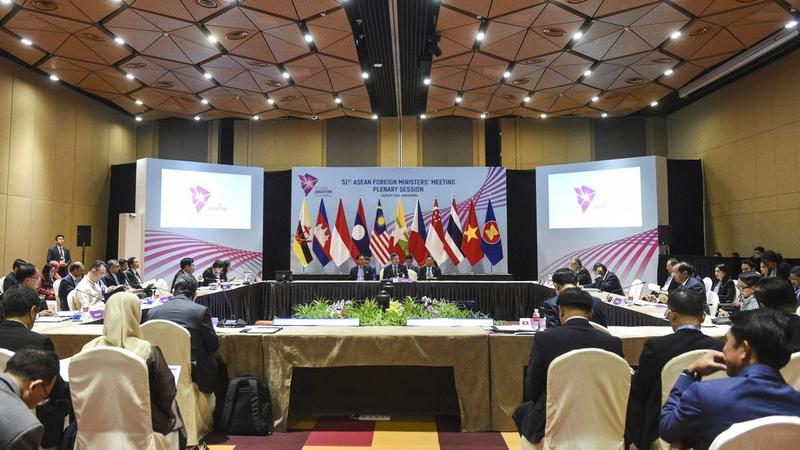 China and all the 10 members of the Association of Southeast Asian Nations have agreed on a "milestone" single draft text as they negotiate the Code of Conduct in the South China Sea, Singaporean Foreign Minister Vivian Balakrishnan said.

The diplomat made the announcement in opening remarks at the annual China-ASEAN Foreign Ministers' Meeting in Singapore on Thursday.

China and ASEAN countries opened negotiations on the COC in 2013 to ensure that the pact boosts peace, stability and prevents conflicts in the South China Sea.

The single draft of the COC negotiating text, the first of its kind to define the framework and essential items of the expected COC, "will be a living document and the basis of future COC negotiations", Balakrishnan said.

State Councilor and Foreign Minister Wang Yi told those attending the meeting that the draft represents major progress, and as long as the countries eliminate disturbances, the process of negotiating the COC will speed up.

Wang told reporters that the draft is like laying a foundation and building the supporting pillars for a house－the COC.

Su Xiaohui, an international strategy studies researcher at the China Institute of International Studies, said the draft "marks the shared sincerity of China and all ASEAN member states in building rules for the region".

Behind the progress is China's commitment to one-on-one talks with the parties concerned in South China Sea disputes as well as ASEAN countries' agreement with China's statements, Su said.

Disturbances from the region's outsiders, such as the United States' "freedom of navigation" actions, are not helpful to the COC negotiations, and the outsiders are expected to play a positive role, Su said.

Earlier in the day, the 10 ASEAN foreign ministers convened for their annual meeting and issued a joint statement.

Sources close to the matter told China Daily that the joint statement this year shows a softened stance regarding the South China Sea issue compared with the statement issued last year.

"The overwhelming majority of ASEAN members speak positively of the progress in managing and controlling the South China Sea situation, jointly achieved by China and ASEAN countries," said one source, who requested anonymity.

Also at the China-ASEAN meeting, Wang announced that a few days ago, China sent one of its most advanced maritime rescue vessels, carrying search and rescue professionals, to remain on standby at the Nansha Islands in the South China Sea.

They are available to provide maritime rescue services when ships from other countries need them, Wang said.

China will offer other services, such as scientific research and meteorology, to countries in the region, Wang added.