By Zhang Li and Shi Ruipeng 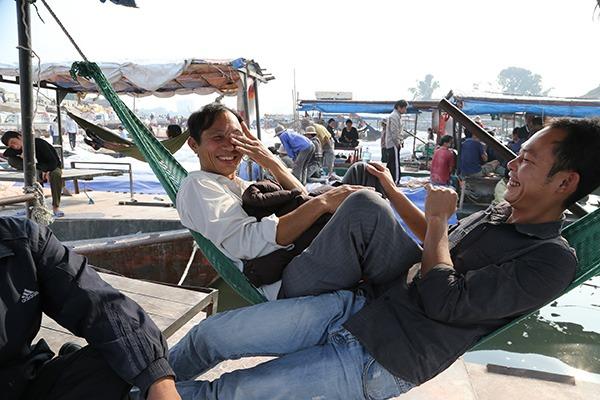 As Xiang Guangquan unloads imported seafood from a boat at the Dongxing border trade area in the Guangxi Zhuang autonomous region, he is finally seeing hope in his life.

Just a year ago, Xiang could hardly made ends meet in Hezhou village of Dongxing, which shares a land border with the Vietnamese city of Mong Cai.

"I don't have any skills to make money except for farming. Things got worse when my daughter attended middle school and it was difficult to pay the tuition," said Xiang, who was then living under the national poverty line.

Life came to a turning point when the local government introduced cooperative mechanisms to alleviate poverty.

As an important border port, Dongxing provides a major trade link between China and Vietnam. Everyone living in the border areas is allowed to import a daily limit of up to 8,000 yuan (US$1,130) worth of products for daily use without paying duties

As an important border port, Dongxing provides a major trade link between China and Vietnam. Everyone living in the border areas is allowed to import a daily limit of up to 8,000 yuan (US$1,130) worth of products for daily use without paying duties.

In 2018, Xiang was invited to join a cooperative with over 20 members. The team is engaged in the border trade business, and members help each other.

Xiang's cooperative focuses on importing seafood from Vietnam and selling it nationwide.

Last year, he got an annual benefit of around 7,600 yuan, while at the same time working as a longshoreman, which brings him 26,000 yuan a year.

"My daughter has successfully applied for a school grant, so my family has less financial pressure now," he said. "What's more, I make much more money than before and I am very content with my life."

So far, Dongxing has set up 128 cooperatives with 3,300 members, among whom 296 people like Xiang Guangquan have escaped poverty.

According to Xiang Jiancheng, head of Hezhou village who is also the developer of the cooperative mechanism, his purpose was to attract idle laborers who tend to have no knowledge of trade.

"A leader with good knowledge of international trade and law and a trustworthy accountant are the core and critical positions of each cooperative," the developer said. "Other members are well organized and are guided in the business by the two leaders. Meanwhile, members help each other and assume different jobs during the whole business process."

Saving on business costs is the key advantage of joining a cooperative, said Xiang Jiancheng, who established the first cooperative in 2013.

"Twenty people together can import as much as 160,000 yuan in products at one time tax free, and also benefit from a much lower wholesale price," he said.

People living along the border in Dongxing imported and exported 18.1 billion yuan worth of products last year.

According to Zhang Hui, director of the Dongxing poverty alleviation office, "the cooperative is effective in helping villagers expand their trade business and increase income from collaboration. It is easy for other border regions across the nation to imitate. So far, the mechanism has been promoted in Xinjiang, Yunnan and Hainan."