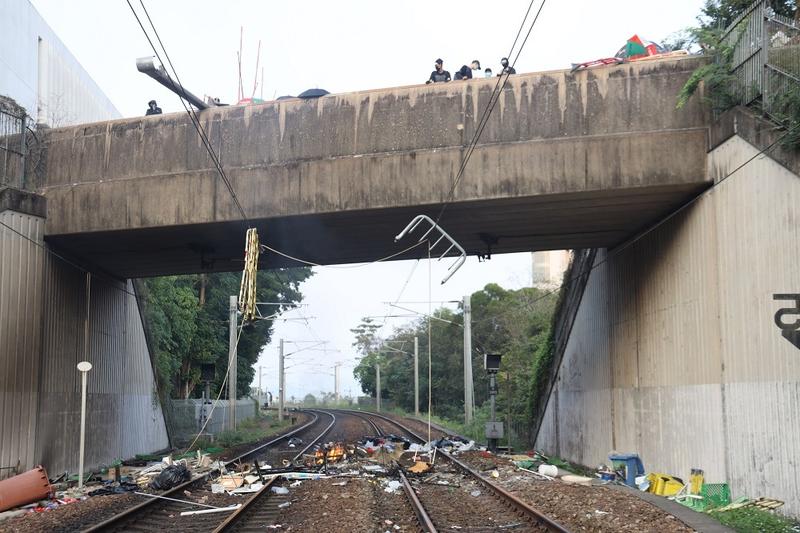 HONG KONG - Hong Kong Secretary for Security John Lee Ka-chiu said on Wednesday that universities were not safe havens for lawbreakers and the police are duty-bound to enforce the law in campuses.

Lee made the remarks as the city’s universities have become hotbeds of violence and vandalism in recent days.

Speaking at a press briefing on Wednesday, Lee said that all places in Hong Kong are governed in accordance with the laws, including university campuses.

He added that the police have a statutory responsibility to take action if there is any unlawful conduct.

According to 50 (4) of the Police Force Ordinance, even without a warrant, it is lawful for police officers to enter a place and search therein to prevent suspects from escaping.

Universities are places for education and should not become breeding grounds of violence, Lee said. He said he hoped all Hong Kong people, especially students, could clearly understand that, and cautioned that “unthinkable” consequences may come if violence continued.

He also said that Hong Kong has been roiled by a fresh round of violent attacks, which were more severe and extensive than before, a posing greater threat to public safety.

On Tuesday, more than 30 locations across the city were attacked by radicals. They threw gasoline bombs into train compartments packed with passengers and at a gas station.

Only 100 of the 650 franchised buses routes could offer limited services on Wednesday, Secretary for Transport and Housing Frank Chan Fan said.

The chaos also led to class cancellation at more than 60 primary and secondary schools on Tuesday, according to Secretary for Education Kevin Yeung Yun-hung.

The Education Bureau announced a full-day suspension of schools on Thursday on safety concerns.

In a statement issued on Wednesday, a spokesperson for the bureau said the chaotic traffic and dangerous situation on the road has made it very difficult for students to attend schools.

The city’s Chief Secretary for Administration Matthew Cheung Kin-chung said the government was highly concerned about the situation.

Whatever the purpose, violence is never a solution, Cheung said. He reiterated that the government will firmly support the police in quelling the unrest. He also called on the public to stay away from violence.