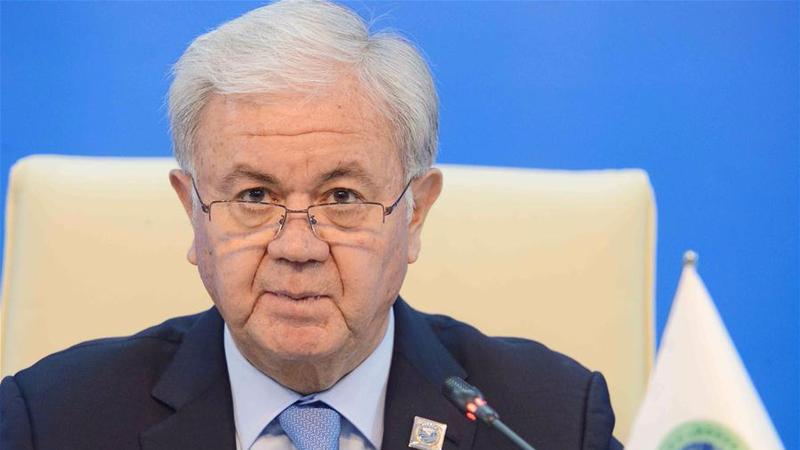 In this June 9, 2017 photo, Rashid Alimov, Secretary-General of the Shanghai Cooperation Organization (SCO), speaks during a press conference at the Astana summit of SCO in Astana, Kazakhstan. (Sadat / Xinhua)

BEIJING – The Shanghai Cooperation Organization (SCO) is not a military alliance like the NATO and the regional body has no intention to target any country, SCO Secretary-General Rashid Alimov said here on Tuesday.

The Western hype labeling the SCO as a "future Eastern counterweight of NATO," which emerges from time to time, deliberately distorts the SCO's essence and its practical activities, Alimov said in response to netizens’ questions during an interview with Xinhua.

The SCO will create the positive political atmosphere that is helpful for comprehensively consolidating and developing trust, respect and friendship.

Speculations re-emerged that the SCO could be a potential rival of NATO following the accession of India and Pakistan into the bloc earlier this year.

The SCO has never and will never go against any country, and this has been clearly stated in the organization's basic documents, Alimov said.

The bloc has vastly increased its influence and prestige in international and regional affairs within a relatively short period of time and has always been advocating peaceful development and good-neighborly relations.

The SCO is not a military bloc, but it constantly strengthens mechanisms aimed at resolutely eradicating terrorism and other forms of criminal acts, Alimov pointed out.

Founded in 2001, the bloc now covers three-fifths of Eurasia and half the world’s population.

RESOLUTION OF DISPUTES BETWEEN MEMBERS

The SCO has neither the authority nor the instrument to settle bilateral disputes between its members, but it will create the political atmosphere to help resolve such issues, said Alimov.

He said disputes such as those between India and Pakistan should be "discussed and resolved through a bilateral format and in a friendly and constructive manner."

The SCO member states are willing to discuss issues of common interests based on equality of all members, as underlined by the Shanghai Spirit.

Alimov said the SCO will create the positive political atmosphere that is helpful for comprehensively consolidating and developing trust, respect and friendship.

"This is the key attitude of the eight-member SCO towards new members such as India and Pakistan," he added.