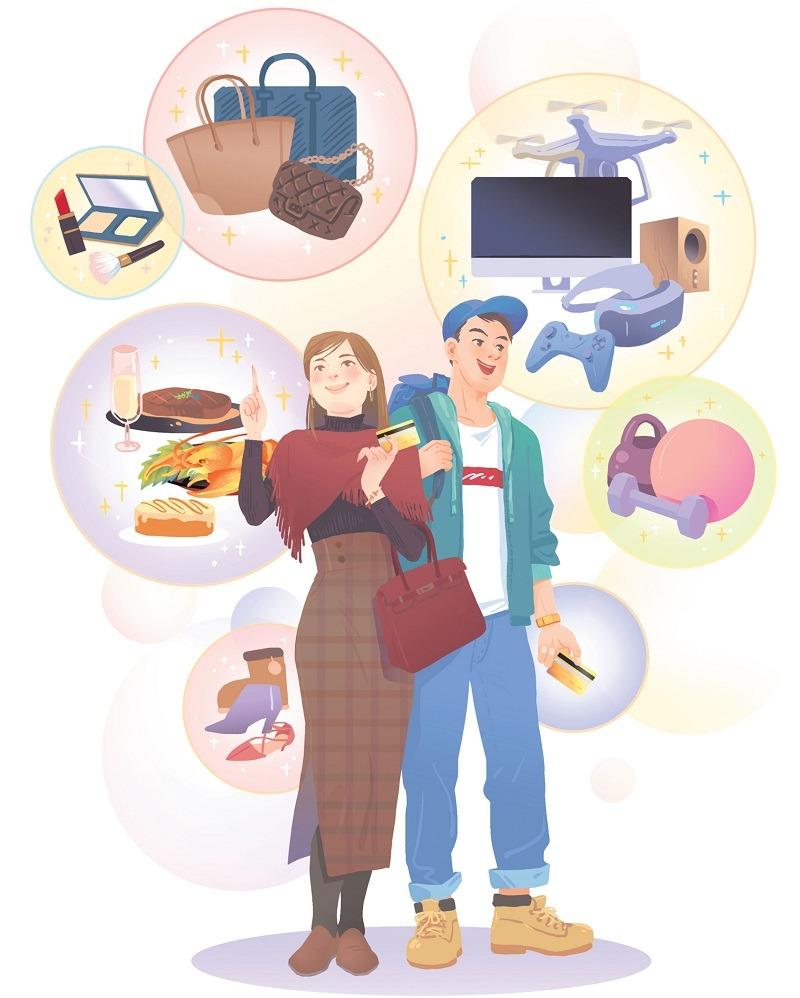 While older people in China typically believe that saving is a virtue, their children have other ideas. Many prefer to spend their money, and with new consumer credit services, they can easily buy now and worry about paying later.

A recent report from the People's Bank of China, the central bank, said that by the end of the third quarter, the total amount outstanding for over six months on credit cards reached 88 billion yuan (US$12.7 billion), representing quarter-on-quarter growth of 16.43 percent.

The younger generation numbers 402 million, accounting for about 30 percent of the country's total, according to the Sixth National Population Census, conducted in 2010

In contrast, China's household savings rate, which ranked among the highest in the world for decades, has fallen significantly in recent years, from 16 percent in 2010 to 7.7 percent last year.

Some 56 percent of employed Chinese age 35 and younger do not have any savings. Those who do are putting away just 1,389 yuan per month on average, according to a report released by Fidelity International, a company that provides investment services and retirement expertise, and Ant Fortune, a wealth management platform.

Dai Ke, a partner with consultancy Roland Berger, said people born in the 1980s and '90s have become mainstream consumers in China, and the younger generation's consumption habits and concepts differ greatly from those of their seniors.

The younger generation numbers 402 million, accounting for about 30 percent of the country's total, according to the Sixth National Population Census, conducted in 2010.

"The older generation believes in thrift and adjusting expenditure based on income, but for the younger generation, consumption on credit and the pursuit of high-quality and characteristic material goods are the new trends," Dai said.

"They are usually very positive about future income, have a strong desire for consumption, and feel more comfortable about shopping with borrowed money."

Liu Yufan, a 25-year-old who works for an interior design company in the construction industry in Hangzhou, capital of Zhejiang province, makes about 6,000 yuan a month. Born in a small village and with no financial support from his family, he bought a car costing 100,000 yuan and an iPhone X by installment only a few months after he started working.

"I'm a big fan of fancy digital products and cars, and I cannot wait for many years to get them," he said. "I don't worry about borrowing money, because I'm sure I have the ability to live a better-off life if I keep working hard."

"I want to give my daughter the best products and education that her peers enjoy, as long as I can make ends meet," she said.

While older people spend mainly to meet their basic needs and save most of their money in banks, the younger generation is more willing to spend money in areas including fine food, tourism, gymnasium and fitness sessions, and high-tech products.

"Some of them spend their entire salary by the end of each month, and some even have to get new loans to repay old ones," Dai said.

On Nov 11, China's annual Singles Day shopping festival, online sales exceeded 300 billion yuan, a yearon-year rise of 27 percent. More than 70 percent of the buyers were born in the '80s and '90s, according to the Ministry of Commerce.

Dai said the younger generation has grown up in an era when China has made tremendous economic achievements and become the world's second-largest economy. 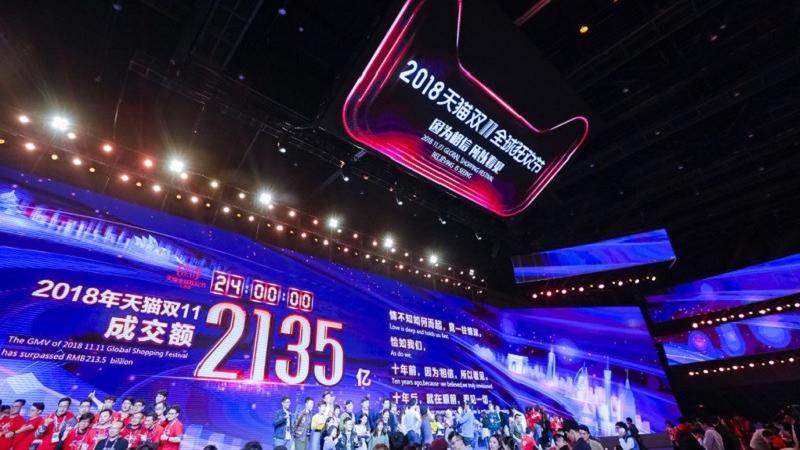 Compared with the older generation, it has enjoyed "affluent material conditions" since childhood and has a greater desire for a "quality life". So when young people enter the job market, they do not attach equal importance to saving money, but are more willing to spend, especially on personalized products, brands and leisure pursuits such as photography and tourism, Dai said.

They are also more willing to spend as they have grown up at a time when China's internet industry has made great progress and the sharing of information has become fast and easy, he said.

"The internet makes it very easy for the younger generation to get the latest information about fancy products, fashionable lifestyles and unique services across the world - which also increases the desire to buy," Dai added.

The older generation believes in thrift and adjusting expenditure based on income, but for the younger generation, consumption on credit and the pursuit of high-quality and characteristic material goods are the new trends

Zhen Xinwei, a senior manager with Bank of China and a researcher at the International Monetary Institute at Renmin University of China, said that in every era the younger generation usually has the strongest desire to buy, but lacks "economic strength". However, in the internet age, the combination of finance and technology has brought huge convenience and has greatly widened young people's choices.

"Chinese can easily use mobile phones to buy items both online and offline, even from street stalls in small counties, making consumption superconvenient," Zhen said.

"Compared with getting loans from traditional financial institutions, these services are easier to apply for and can reduce the threshold for getting small loans, catering to the younger generation," he said.

Figures from the People's Bank of China show that in the third quarter, 659 million credit cards were in use in China, representing quarter-on-quarter growth of 3.36 percent.

Industrial and e-commerce companies also offer various types of consumer credit services. For example, in 2015, Alibaba Group Holding's financial unit Ant Financial Services Group launched Ant Check Later, which soon became popular with people born in the '80s and '90s. At least one-in-four of those ages 18 to 27 use Ant Check Later, according to the company.

This service offers consumer credit ranging from 500 to 50,000 yuan based on the company's risk assessment of customers by using big data analysis. Credit is interest free for up to 41 days, and the company has said that consumers can apply for a delay to repayments if they agree to pay a certain rate of interest.

Such a service was first offered to users of Alibaba's online shopping platforms T-mall and Taobao, but now covers almost all major online and offline shopping malls and even very small shops in China.

Albert Chan, managing director and financial services lead with Accenture, a global marketing consultancy, said the rapid development of financial technologies and services has greatly stimulated consumption. This has had a bigger influence on people age 40 and younger, as they are also the main force for mobile payments and online shopping and are willing to embrace new technology and financial products.

"Mobile payment and consumer credit services make consumption so much easier than taking cash from one's wallet to buy things," he said.

Chen Zhiwu, a professor of finance at Yale University in the United States, said that in the past, China's financial market was not so well developed, and many people did not have the chance to enjoy various types of financial services. Today's younger people are lucky to have so many financial products they can use to improve their lives and investments.

"It is important to know that spending by borrowing money is not a bad thing," he said. "We need to optimize consumption in different stages of our lives based on the money we might get in our whole lives, rather than only arrange our consumption based on current income."

He said China's economic development, in many respects, has benefited from consumer finance. For example, the real estate industry has boomed since people embraced the idea of securing mortgages to buy their homes. It is the same with the auto industry.

Chan said that generally consumption on credit can be beneficial to the development of the financial and retail sectors, and will eventually boost economic growth.

However, to ensure the healthy development of consumer finance at a time when credit services are expanding rapidly, it is important for financial institutions to manage the default risks, especially for people unable to obtain loans through other channels and who may have difficulty in repaying them, he said.

It is also important to educate young people on the importance of repaying loans and maintaining a good credit record, especially for those tempted by compulsive buying, Chan added.