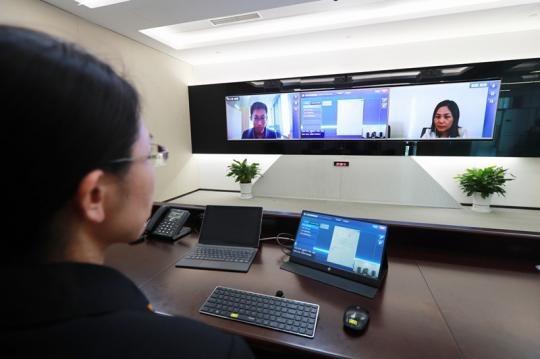 A judicial official at the new Beijing Internet Court demonstrates on Sunday how cases are tried online. (PHOTO / CHINA DAILY)

Chinese people have been given easier access to litigation and legal services since the country's top court has strengthened efforts in building "smart" courts over the past five years, according to a white paper.

Chinese courts have applied technologies into their case handling and have built three internet courts since 2012 to offer more convenience to litigants and to improve judicial efficiency and transparency, the paper said.

All legal procedures, such as case filings, evidence submissions, case hearings and ruling delivery can be completed online in the three district-level courts

A year later, two other such courts were established in Beijing and Guangzhou, Guangdong province.

All legal procedures, such as case filings, evidence submissions, case hearings and ruling delivery can be completed online in the three district-level courts, it said.

As of Oct 31, more than 80,000 cases have been conducted in the online courts. On average, each hearing lasts about 45 minutes, and the whole litigation process takes roughly 38 days, it said, adding that the courts save both litigants and judges much more time compared with traditional methods.

While simplifying the legal process for litigants, "the internet courts have also played a bigger role in exploring how to regulate internet behavior by hearing cases and how to govern cyberspace by rule of law," said Li Shaoping, vice-president of the top court.

In June, for instance, Zhang Wen, president of the Beijing Internet Court, resolved a dispute over unpaid fees for faking online views.

"I thought it was just an online service contract dispute at first, but after the hearing, I deemed the contract invalid and illegal, as falsifying views has damaged public interests and disturbed order in cyberspace," she recalled.

The number of online views can help netizens better assess an online service, product or platform.

"Faking views, such as in this case, is a kind of fraud, misleading users and bringing disorder to the online business environment," she said, adding both the parties had been ordered to hand over their illegal gains.

Speaking of the future, Hu Shihao, director of the top court's judicial reform office, said they will integrate the online platforms to optimize legal services by effectively taking advantage of technologies, including artificial intelligence and blockchains.

"We'll try harder to keep the internet in order through the rule of law and also increase efforts to train legal talent to improve the quality of internet-related case hearings," Hu added.