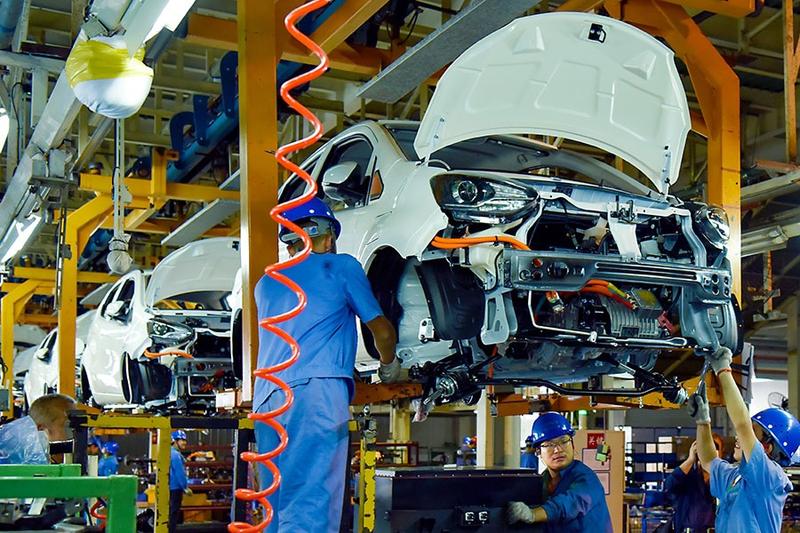 In this undated photo, employees assemble a new energy vehicle at an auto plant in Jiangxi province. (DUAN CHANGZHENG / FOR CHINA DAILY)

Sales of new energy vehicles in China are forecast to grow by more than 40 percent year-on-year in 2019, despite overall automobile consumption remaining flat, experts said on Wednesday.

The comments came after more than 1 million new energy vehicles were sold in the first 11 months of 2018, an increase of 68 percent year-on-year.

The gradual maturing of electric car technologies and consumers' growing desire to embrace eco-friendly cars will ... give it a good momentum

"But the gradual maturing of electric car technologies and consumers' growing desire to embrace eco-friendly cars will still give it a good momentum," Xiao said.

China has been the largest market for new energy vehicles since 2015. The big market potential is attracting international brands including Tesla Inc, as well as a string of Chinese startups such as Nio Inc.

Nio, which was listed in New York last year, has sold more than 9,700 vehicles in China within six months. Meanwhile, Xpeng Motors Technology Ltd delivered its first commercial model to 24 customers in December.

Local governments have also scrambled to tap into the opportunities, with more than 20 cities setting goals to build themselves into China's "motor towns" by the end of August, according to data compiled by the financial newspaper Economic Observer.

The booming electric car industry sharply contrasts with the overall decline of the automobile sector. The automotive market is almost certain to see an annual drop in sales in 2018, the first in 28 years, after the nation's car market already reached an immense scale in production and sales volume.

"In 2017, about 29 million automobiles were sold in China. It would be very difficult to continue growth on the basis of such a big number," Xin added.

Xu Haidong, an official at the China Association of Automobile Manufacturers, agreed, saying that China's auto market has entered a period of adjustment, and is likely to see neither rebounds nor further declines in two or three years.

But as capital floods into the new energy vehicle sector, it has also triggered worries about overheated development. To shore up the quality growth of electric cars, the National Development and Reform Commission, the nation's top economic planner, unveiled a guideline in December to raise the bar for electric car startups, preventing incapable players from building plants.

Li Fusheng contributed to this story.