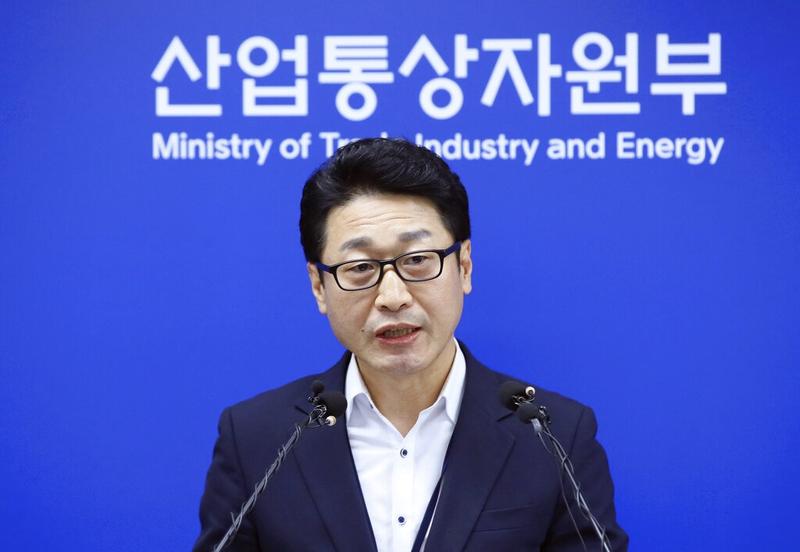 Lee Ho-hyeon, a director general for International Trade Policy at the Trade, Industry and Energy Ministry, speaks at the government complex in Sejong, the Republic of Korea, Sept 17, 2019. (JIN SUNG-CHUL / YONHAP VIA AP)

SEOUL — The Republic of Korea (ROK) on Wednesday dropped Japan from a list of countries receiving fast-track approvals in trade, a reaction to Tokyo's decision to downgrade Seoul's trade status amid a tense diplomatic dispute.

ROK's trade ministry said Japan's removal from a 29-member "white list" of nations enjoying minimum trade restrictions went into effect as Seoul rearranged its export control system covering hundreds of sensitive materials that can be used for both civilian and military purposes.

The change comes a week after ROK initiated a complaint to the World Trade Organization over a separate Japanese move to tighten export controls on key chemicals ROK companies use to manufacture semiconductors and displays.

Lee Ho-hyeon, a ROK trade ministry official, said the change would affect about 100 local firms that export items such as telecommunications security equipment, semiconductor materials and chemical products to Japan

Seoul has accused Tokyo of weaponizing trade to retaliate against ROK court rulings ordering Japanese companies to offer reparations to ROK people forced into labor during World War II. Tokyo's measures struck a nerve in ROK, where many still resent Japan's brutal colonial rule from 1910 to 1945.

According to ROK's trade ministry, the new measures in effect mean it might take up to 15 days for ROK companies to gain approvals to export sensitive materials to Japan, compared to the five days or less it took under a simpler inspection process provided for favored trade partners.

Lee Ho-hyeon, a ROK trade ministry official, said the change would affect about 100 local firms that export items such as telecommunications security equipment, semiconductor materials and chemical products to Japan. He said Seoul will work to minimize disruption to ROK companies.

Japan for decades has enjoyed a huge trade surplus with ROK, an economy that's much more dependent on exports. Many major manufacturers heavily rely on parts and materials imported from Japan.

But the dispute is taking a toll. Exports to ROK from Japan fell 9.4% last month, Japan's Finance Ministry reported Wednesday.

The trade dispute between the neighbors erupted in July, when Japan imposed tighter export controls on three chemicals ROK companies use to produce semiconductors and displays for smartphones and TVs, major export items for ROK. It cited unspecified security concerns over Seoul's export controls.

A few weeks later, Japan dropped ROK from its own trade "white list," triggered a full-blown diplomatic dispute that took relations between the US allies to their worst in decades.

The dispute has spilled over to security issues, with Seoul declaring it plans to terminate a bilateral military intelligence-sharing pact with Japan that symbolized the countries' three-way security cooperation with the United States in the face of the Democratic People's Republic of Korea (DPRK)'s nuclear threat.

Following an angry reaction from Washington, Seoul later said it could reconsider its decision to end the military agreement, which remains in effect until November, if Japan relists ROK as a favored trade partner.

Seoul announced its plans to downgrade Tokyo's trade status in August before holding a 20-day period to gather opinions on the decision, during which the Japanese government voiced opposition to the move it described as "arbitrary and retaliatory," Lee said.

He said Seoul needs to strengthen controls on shipments to a country that's "hard to cooperate with" and fails to uphold "basic international principles" while managing export controls on sensitive materials.

ROK previously divided its trade partners into two groups in managing export controls on sensitive materials. Following Wednesday's change, ROK now has an in-between bracket where it placed only Japan, which would mostly receive the same treatment in trade as the non-favored nations in what had been the second group.