Overriding task in Hong Kong is ‘to stop violence’ 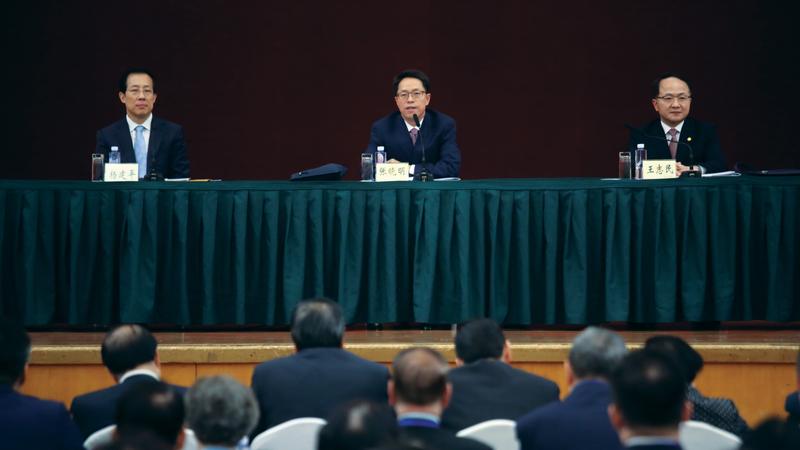 HONG KONG-The central government will not sit by if the situation in Hong Kong deteriorates to a point that Hong Kong Special Administrative Region government cannot handle, Zhang Xiaoming, director of the Hong Kong and Macao Affairs Office of the State Council, said at a symposium in Shenzhen, Guangdong province, on Wednesday.

The central government has sufficient capabilities to quickly quell possible unrest as empowered by the Basic Law of Hong Kong, Zhang said.

“The most pressing and overriding task at present is to stop violence, end the chaos and restore order, so as to safeguard our homeland and prevent Hong Kong from sinking into an abyss,” Zhang said, adding it is facing “the most serious situation” since its return to the motherland in 1997.

Speaking to about 550 dignitaries from a wide cross-section of Hong Kong society, Zhang said the central government is highly concerned about the situation in the city and is closely following developments there.

Zhang’s remarks followed two earlier news conferences by the office to voice concerns about the turmoil in Hong Kong. Since June 9, anti-extradition bill protests have not only grown bigger and more widespread, but have also become more violent.

Radical protesters vandalized public buildings, besieged police stations and desecrated the national emblem and the national flag. Any act challenging the “one country, two systems” bottom line will not be tolerated, Zhang said.

Bringing peace and order back to Hong Kong is a shared aspiration of the majority of the people, Zhang said.

The key to navigating out of turmoil is to support Chief Executive Carrie Lam Cheng Yuet-ngor and the police in enforcing the law strictly and sternly, he said.

Patriotic forces can also play a pivotal role in steering the city out of the storm as they are a main force in safeguarding stability and prosperity, Zhang added.

Director of the Liaison Office of the Central People’s Government in the Hong Kong SAR Wang Zhimin and Yang Jianping, deputy director of the office, also attended the symposium.

Zhang’s comments were exactly what was needed to boost the confidence and morale of patriots, Wang said.

He added that Hong Kong is experiencing a crucial battle that concerns the city’s destiny and future. Putting an end to violence is the city’s top priority and also the common aspiration and the most urgent demand of the city’s people, he said.

Calling for unswerving support for the SAR’s chief executive and the government, Wang also encouraged the public to firmly support the police in their enforcement of the law.

The demonstrations in Hong Kong have evolved into radical and violent activities that seriously violate law and jeopardize the city’s security and order, and any responsible government will not sit idly by in the face of such violent transgressions of the law, Foreign Ministry spokeswoman Hua Chunying said on Wednesday.

Rebuking the remarks made by some US politicians that if Beijing enforces martial law in Hong Kong, the US will reevaluate its relationship with China, Hua said such words are confusing what’s right with what’s wrong.

“I want to ask these people, do you still remember how the US police dealt with the Occupy Wall Street movement in 2011? If Hong Kong’s radical, violent and illegal activities happened in the US, what would the US police do?” Hua said.

Any attempt to interfere in Hong Kong’s affairs and China’s internal affairs is doomed to fail, she said.

Speaking after attending the morning session of the full-day symposium, Margaret Chan Fung Fu-chun, former director-general of the World Health Organization, said she could barely recognize the city now.

Chan, who was born and raised in Hong Kong, said the city had suffered sustained violent attacks on its rule of law by a small group of people who attacked those holding different views from their own.

The success of Hong Kong as an international metropolis is built on the respect for different voices and on resolving differences through dialogue, she said.

She said in her 25 years as a civil servant in the colonial government, she had never seen so many people allowed to protest on the streets — something that never would have been possible without the guarantees of the Basic Law and the “one country, two systems”.

Tam Yiu-chung, a Hong Kong member of the NPC Standing Committee, said the loud and clear message he heard from the symposium was that the “one country, two systems” bottom line must not be challenged.

Lawmaker Starry Lee Wai-king said stopping violence, as Zhang said, was the top priority to restore social order, and it was also what the public wanted.

“I believe nobody wants to see an unstable Hong Kong as everyone needs to pay a price for the mayhem,” Lee said.