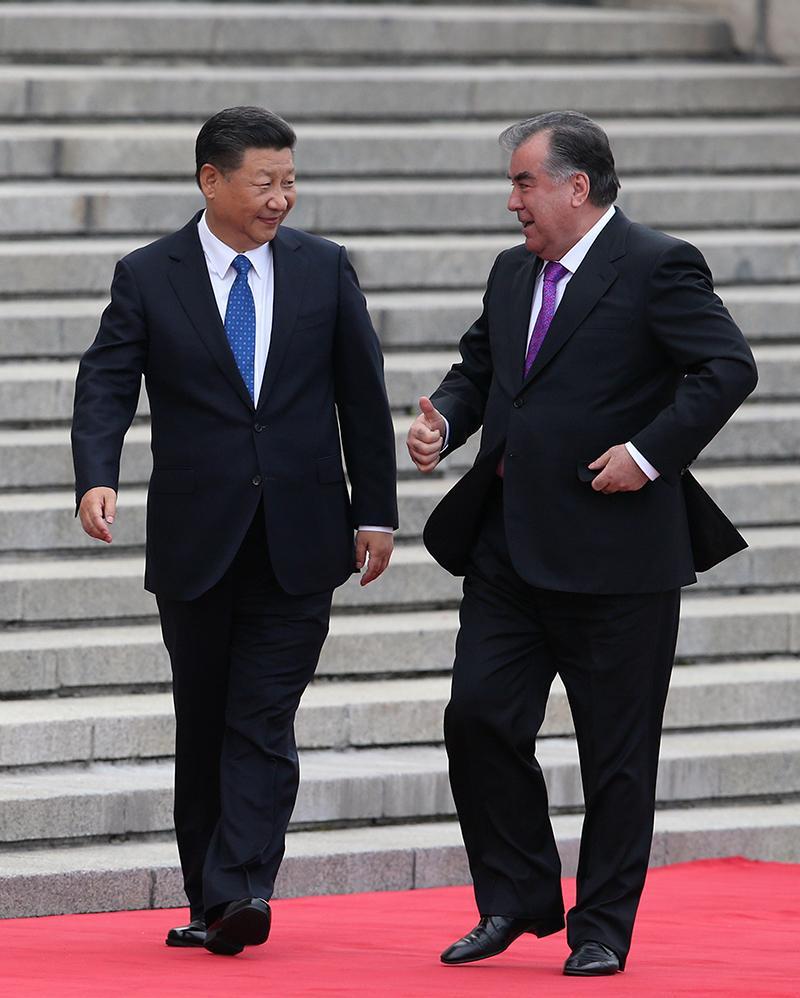 President Xi Jinping greets his Tajikistani counterpart, Emomali Rahmon, at a welcoming ceremony on Thursday outside the Great Hall of the People in Beijing. (WU ZHIYI / CHINA DAILY)

China and Tajikistan signed 13 documents to enhance cooperation in such areas as agriculture, energy, finance and infrastructure on Thursday.

The agreements and memorandums of understanding were signed at the Great Hall of the People. Present were President Xi Jinping and his Tajikistani counterpart, Emomali Rahmon, who is on a seven-day visit to China that started on Wednesday. The two leaders also signed a joint declaration to upgrade their ties to a comprehensive strategic partnership.

China and Tajikistan are friendly neighbors with close relations, and are strategic partners with high mutual trust, Xi said, adding that the two countries have made fruitful progress in cooperation in such areas as politics, economy, security and people-to-people exchanges.

"We have treated each other as always with mutual respect, understanding and support," Xi told Rahmon.

China highly appreciates Tajikistan's support for the Belt and Road Initiative from the very beginning, Xi said. The two nations should connect their development strategies and strengthen cooperation on transportation, energy, cyberspace and infrastructure, he added.

In June, the two presidents had talks during the Shanghai Cooperation Organization Summit in Astana, Kazakhstan. The repeated meetings of the two leaders within three months shows their "special and high level" ties, Xi said.

Xi noted that China and Tajikistan have launched a number of important exchange programs and achieved great progress in military and security areas since Rahmon's last state visit to China in May 2013.

China would like to make joint efforts with Tajikistan to seize the opportunities of the 25th anniversary of their diplomatic relations, strengthen strategic communication and deepen mutual beneficial cooperation, Xi said.

Calling China a good neighbor, friend and brother, Rahmon said that Tajikistan supports the building of the Belt and Road. The two sides should deepen cooperation in such areas as agriculture, production capacity, minerals and science parks, the Tajikistani president said.

Foreign Minister Wang Yi said on Wednesday that the dialogue will focus on deepening cooperation and promoting common development, and a statement will be released on the outcomes.

"It is in the interests of all sides to strengthen cooperation among emerging markets and developing countries through the BRICS platform. Therefore China has proposed the BRICS Plus concept based on past experience," Wang said.

Ruan Zongze, executive vice-president of the China Institute of International Studies, said, "BRICS cooperation has not only helped the countries themselves, but enhanced the right to speak on global issues for all developing countries."