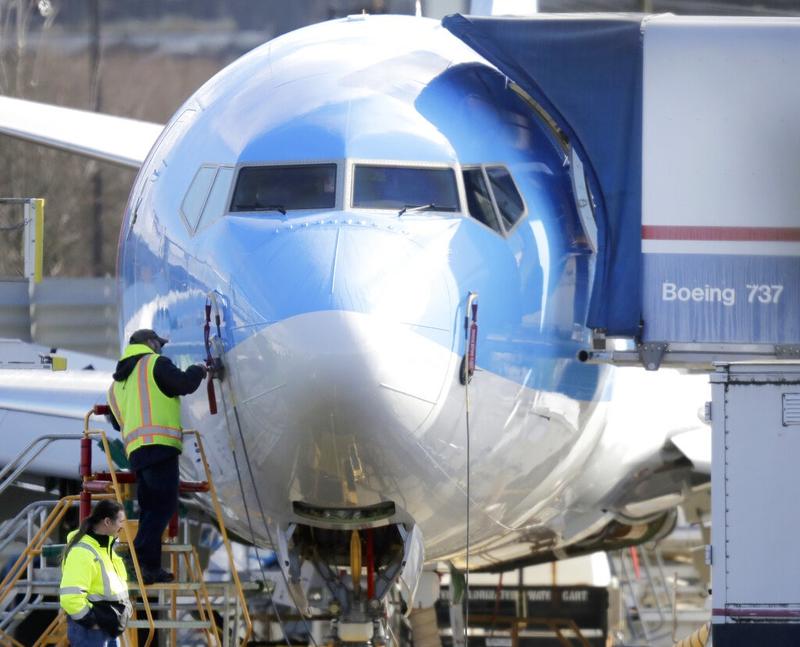 In this March 13, 2019 file photo, a worker stands on a platform near a Boeing 737 MAX 8 airplane being built for TUI Group at Boeing Co's Renton Assembly Plant in Renton, Washing. (TED S WARREN / AP)

CHICAGO/SEATTLE – Boeing Co said on Friday it plans to cut its monthly 737 aircraft production by nearly 20 percent in the wake of two deadly crashes, signaling it does not expect aviation authorities to allow the plane back in the air anytime soon.

Deliveries of Boeing's best-selling aircraft were frozen after a global grounding of the narrowbody model following the crash of an Ethiopian Airlines jet on March 10, killing all 157 people onboard.

Production will be cut to 42 airplanes per month from 52 starting mid-April, the company said in a statement, without giving an end-date.

US and airline officials said they now believe the plane could be grounded for at least two months, but an even longer grounding is a serious possibility.

The crash in Ethiopia and the crash of a Lion Air plane in Indonesia last October that killed all 189 people on board have left the world's largest planemaker in crisis.

Chief Executive Officer Dennis Muilenburg said on Friday said the company now knows that a chain of events caused both disasters, with erroneous activation of so-called MCAS anti-stall software "a common link" between the two.

Boeing said it would not reduce jobs at the new production rate and will work to minimize the financial impact.

The company's board will establish a committee to review how the company designs and develops airplanes, Muilenburg said. The group will "recommend improvements to our policies and procedures" for its 737 MAX and other airplane programs.

Boeing said it continues to make progress on a 737 MAX software update to prevent further accidents.

Shares in Boeing Co fell around two percent after the market closed on Friday. While the number of 737 MAX planes grounded is just over 370, nearly 5,000 more are on order.

Boeing faces logistical issues in finding places to park the growing number of planes as well as being responsible for all their maintenance costs since it has been unable to deliver the jets to customers, two people briefed on the situation said.

Manufacturers avoid halting and then resuming production as this disrupts supply chains and can cause industrial snags. Boeing had been planning to speed up production in June to 57 a month. 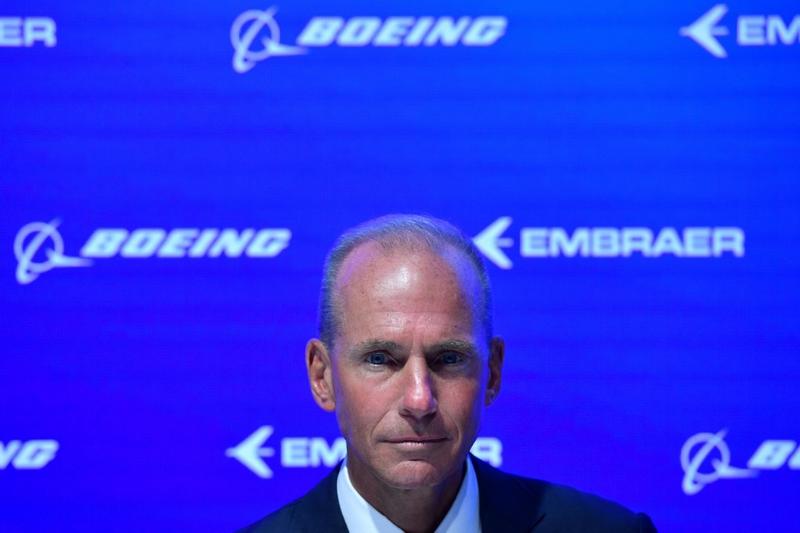 In this file photo taken on July 16, 2018, Boeing CEO Dennis Muilenburg gestures during an event at the Farnborough Airshow, south west of London. (BEN STANSALL / AFP)

Having to hold planes in storage without delivering them does, however, consume extra cash through increased inventory.

Boeing supplier Spirit Aerosystems Holdings said it will continue to make 52 737 MAX shipsets – the complete set of parts for each aircraft – per month, storing extras at its facilities. Its shares fell 3.5 percent.

National Transportation Safety Board (NTSB) chairman Robert Sumwalt told reporters that US investigators were given the raw data from Ethiopian Airlines Flight 302 as soon as it was read in France last month. He added that the Ethiopian Airlines 302 preliminary report "was very thorough and well done."

Former NTSB chairman Christopher Hart was named by the Federal Aviation Administration this week to head an international team to review the safety of the 737 MAX.

He told reporters on Friday he thought the review, which will start on Monday, could take about three months. It is still not clear what countries will take part.

He said investigators are going to be focused far more on the interaction between software and pilots than mechanical issues in future.

"This is territory we are going to see more of," Hart said.