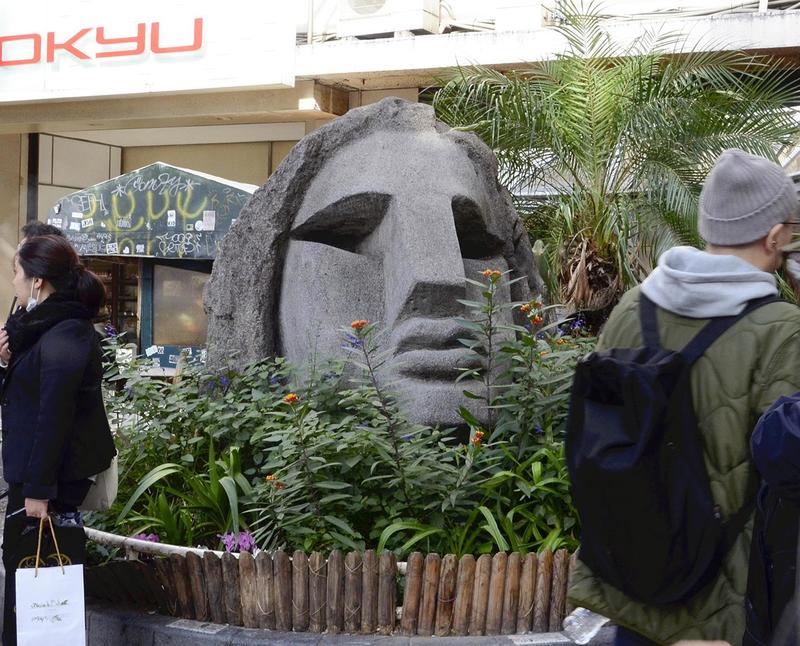 TOKYO — The Moyai statue near JR Shibuya Station is a well-known meeting spot for those passing through the station. Though it resembles the Moai figures of Easter Island, the statue’s name is spelled differently.

The story of the Chuken Hachiko (Hachi the loyal dog) statue nearby is widely known, but the origins of the Moyai statue are shrouded in mystery. What’s the story behind this peculiar statue?

Located just outside the west gate of Shibuya Station, the statue has the shape of a sharply sculpted human face with wavy long hair and is surrounded by thick clusters of trees and grass

Located just outside the west gate of Shibuya Station, the statue has the shape of a sharply sculpted human face with wavy long hair and is surrounded by thick clusters of trees and grass.

These bizarre features only deepened my curiosity: What brought this object to Shibuya?

Searching for clues, I ventured behind the statue and found another face, like that of an old man with a beard.

I brushed aside the grass while passersby watched me quizzically, and found a small stone structure that seemed to have been hidden.

A metal plate embedded in the structure displayed an inscription in Japanese that appeared to be the title of the statue: “Niijima no Moyai Zo” (Moyai statue of Niijima).

Niijima, located in the Izu Islands, is 140 minutes away by a high-speed cruiser from Takeshiba Pier in Tokyo. The island is known for its beautiful white beaches and clear sea water.

After contacting the Niijima village government, I learned that the statue was indeed a gift from the village. 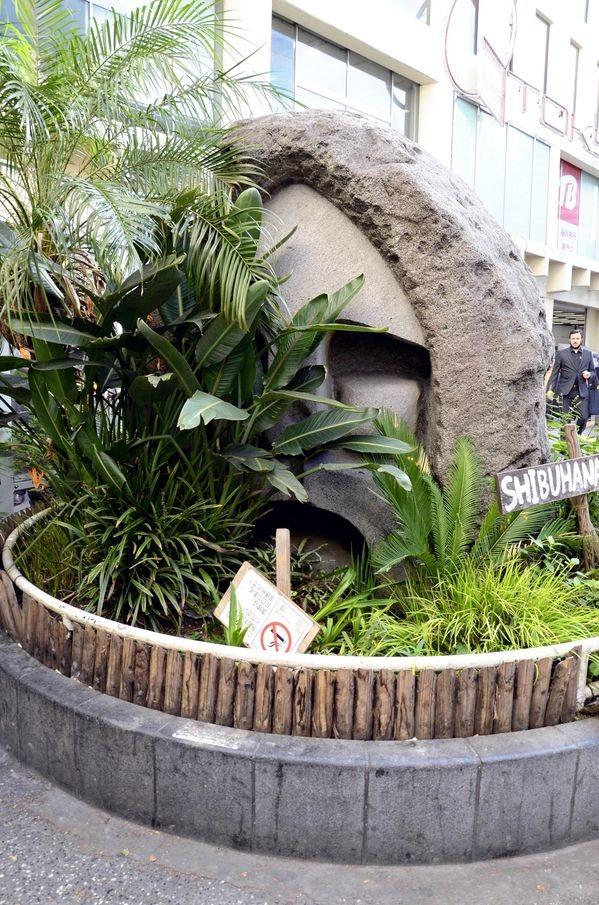 A face is also carved on the back side of the Moyai statue, which is located beside the JR Shibuya Station in Toyko, Japan. (PHOTO / THE JAPAN NEWS)

According to the local government, planning for construction of the statue began amid celebrations for the 100th anniversary of the transfer of administrative jurisdiction of the Izu Islands from Shizuoka prefecture to Tokyo in 1878.

According to the Niijima village government, the Moyai statue is made of kogaseki, an extremely rare variety of volcanic rock found only on Niijima and Italy’s Lipari island

The unveiling ceremony was held in Shibuya on Sept 25, 1980. The Yomiuri Shimbun’s morning edition that day carried an article that said that a stone monument produced in Niijima would likely become a popular new location, overcoming the Hachiko statue’s celebrity.

The article also noted that the monument had been placed in a round flowerbed that had been built ahead of time.

According to the village government, the Moyai statue is made of kogaseki, an extremely rare variety of volcanic rock found only on Niijima and Italy’s Lipari island.

Kogaseki is a sort of pumice formed when lava cools and solidifies. It bears the characteristic of being easy to shave.

The Japanese word “moyai” means coming together or helping one another, and the word is often used by Niijima locals. The statue was created by sculptor Yuichi Daigo, a native of Niijima who once served as head of the Niijima Tourist Office.

As Daigo passed away eight years ago, I instead spoke with his grandson, So Uematsu, 37.

Daigo aimed to vitalize the local community by making statues using kogaseki, a specialty product of the island that possesses captivating features. He thus began making a large number of statues, calling them “moyai zo,” a pun on Easter Island’s famous Moai statues.

Daigo also proposed placing one of the statues in a bustling urban location so that as many people as possible would learn about Niijima. 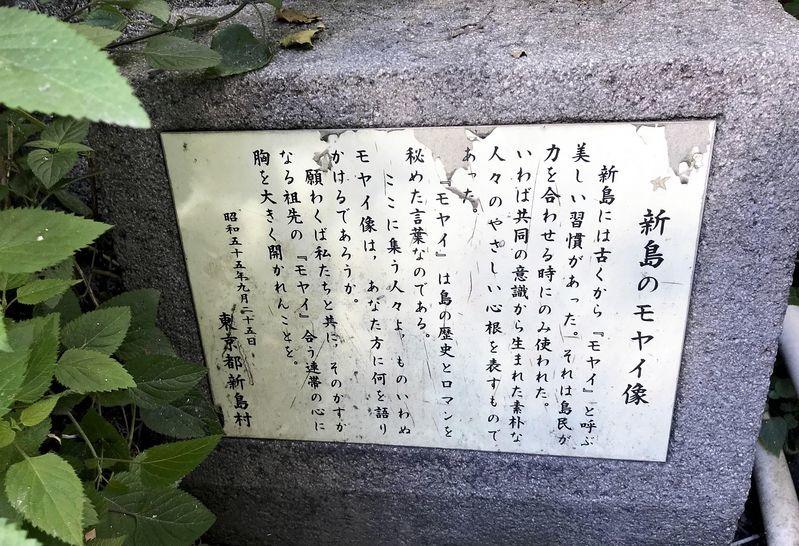 A stone monument placed beside  the Moyai statue, which is located beside the JR Shibuya Station in Toyko, Japan. (PHOTO / THE JAPAN NEWS)

As the Shibuya Ward Office owned a lodging facility on Niijima, it was decided that the Moyai statue would be gifted to Shibuya.

Daigo carved a rough outline of the statue on the island, and the half-completed product was transported by ship and truck to its current location. He then spent several days completing the statue. The sculptor often paused during work as passersby viewed the statue with curiosity and would start talking to him.

“My grandfather told me the face on the front surface with wavy hair represents surfers, while the bearded face on the back represents the island’s exiled peoples who were our ancestors,” Uematsu said.

The embedded plate with the inscription displays a message that Daigo wanted to convey: “People who gather here: What is this Moyai statue, which does not speak, telling you? I hope that together with us, you will broadly open your hearts toward our ancestors’ spirit of solidarity by practicing moyai, which has grown ever dim.”

“My grandfather often said that he would be glad if people came together by practicing moyai with each other,” Uematsu said.