The man with a billion-dollar heart 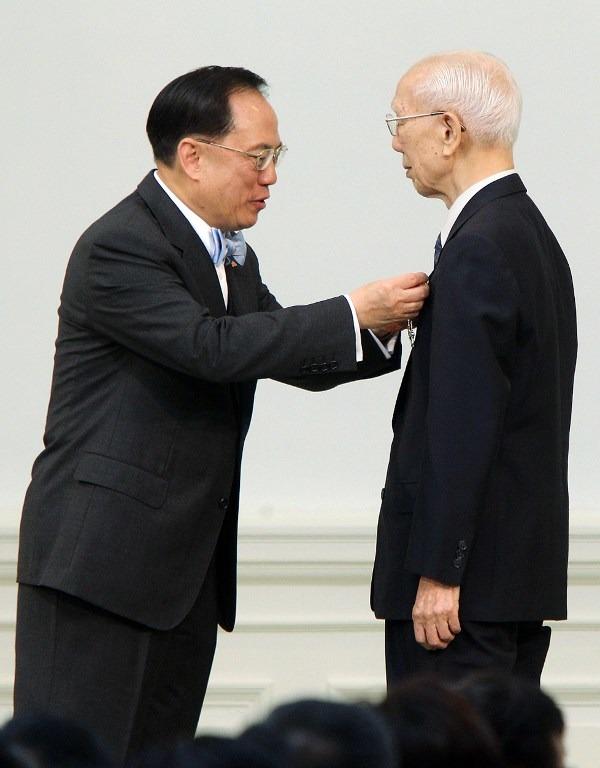 China is a country of enormous potential. Its prosperity depends on human resources

Throughout the tycoon’s 99 years, he had given some 80 percent of his assets — over HK$1 billion — to charitable causes. The money was given chiefly in support of education of countless young people. He subsidized or built new facilities for 93 universities, 200 primary and secondary schools and sponsored 1,700 libraries in rural areas, in 34 provinces and regions, all across China. He also made contributions to three universities outside the country.

Without Tin’s contributions, many of those who have benefited from his generosity would never have had the opportunity for even a basic education.

Tin’s passion was driven by the fact that he wanted others to have what he had been denied of — a complete education. Tin was born in Yintan village, Dabu county in Meizhou city, Guangdong province, on Nov 20, 1919. His father died when Tin was 15. Tin, an only child, dropped out of middle school to fend for himself and his mother.

Leaving school was his greatest regret, he recalled, in a 2007 interview with China Daily. He had no choice, however. Somebody needed to take charge of the family business, making bricks. “I’ve always thought further education would have helped my career, which is partly why I’m so keen on schooling for the young,” he said.

There’s something to Tin’s reflection about being deprived of his education. He showed great acumen in the manufacture of bricks before switching to pottery. Soon he had developed a pottery factory and was well on his way to making a fortune, selling pottery to buyers in Vietnam. Then came June 21, 1939, when Japan invaded Shantou, the only export port for Tin’s products. His business was forced to close. Tin escaped to Indonesia, where he teamed up with his cousin and went into business buying and selling copra and pepper. Six years later, Tin had prospered once more and started his own company, the Tjhauw Loen Rubber Factory. Again, he proved his skill in business. The factory quickly became profitable. 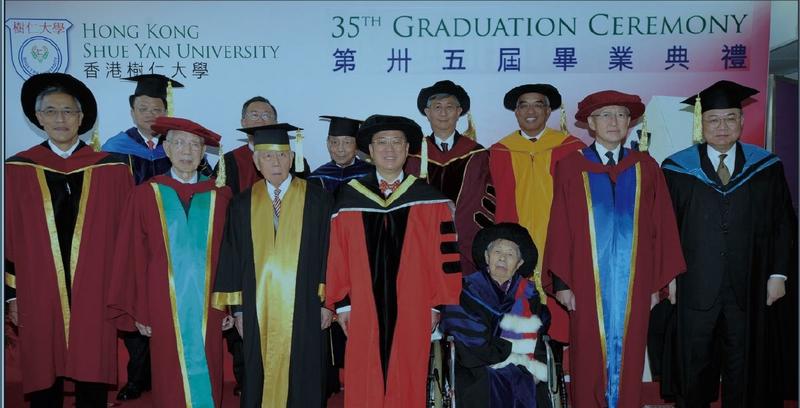 Indonesia presented a difficult, even unfriendly environment to Chinese businessmen. The government there had issued a series of bans against Chinese engaging in certain types of business activities in specified areas. Tin’s business escaped the worst of the prohibitions, but at the same time, he foresaw the business climate getting worse.

In 1958, Tin moved to Hong Kong, converting the core of his Indonesian assets. It took him two years to build his business network, buy lands and prepare machinery. In 1960, he opened Hong Kong’s first factory producing PVC plastic and synthetic leather (a PVC-based material). The factory was able to produce more than 1,000 different synthetic leathers. No other factory came close to that productivity. People in Hong Kong called Tin the “king of synthetic leather”.

During Tin’s some 20 years away from home, he had traveled to developed countries. Most people in those countries were well educated. That drove home to him, again, the importance of education. Then, he made it his personal pledge to contribute his efforts to education, individual growth and the spirit of enterprise.

“China’s hope is in education.” The words are written large on the homepage of the Tin Ka Ping Foundation website. The charitable foundation, which was established in 1982, became the driving force behind Tin’s philanthropic endeavors for the rest of his life.

“China is a country of enormous potential. Its prosperity depends on human resources,” said Tin, in making his case that the education of the young was the key to making the country thrive.

Tin not only gave money but also became involved in the construction of each building to which he had contributed. “The classrooms should face south to get plenty of sunlight,” he argued, “so the students will be comfortable. The teachers’ rooms can be located in older buildings, while the principal’s office can be fairly small,” Tin said. He requested that toilets be built on each floor and instructed engineers to make the hallways wide enough. He wanted students to have the best facilities.

In 1994, the Purple Mountain Observatory of the Chinese Academy of Sciences named Asteroid 2886 “Tin Ka-ping Star” in recognition of his charitable efforts.

Tin’s last wish, before he died, was for China’s education to get better and better, according to an obituary prepared by Tin’s foundation.

There is an old Chinese saying: “It takes 10 years to grow a tree, but a hundred years to nurture people.” Tin, who lived for nearly a century, devoted himself to promoting education throughout his lifetime and in doing so, he took the cause of the future generations of the next century into consideration.

Though Tin is gone, the impact of his philanthropic spirit will endure and shine as brightly as the star bearing his name.

Tin Ka-ping was honored as the “Father of 100 Schools” for his contributions to education. What is unknown to most people is that he earned the accolade at great personal sacrifice. For all the wealth Tin had earned as a successful businessman, his greatest commitment was to help build schools to give kids the chance he never had.

In 2001, when the special administrative region was still struggling to get back on its feet after the Asian financial crisis, the Hong Kong billionaire sold his HK$100-million villa in Kowloon at an undersold price of HK$56 million. He donated all the proceeds from the sale to the building of more than 20 new secondary schools. Tin’s family had to move into a 130-square-meter flat after the 700-square-meter mansion, which had been home to his family for 37 years, was sold. 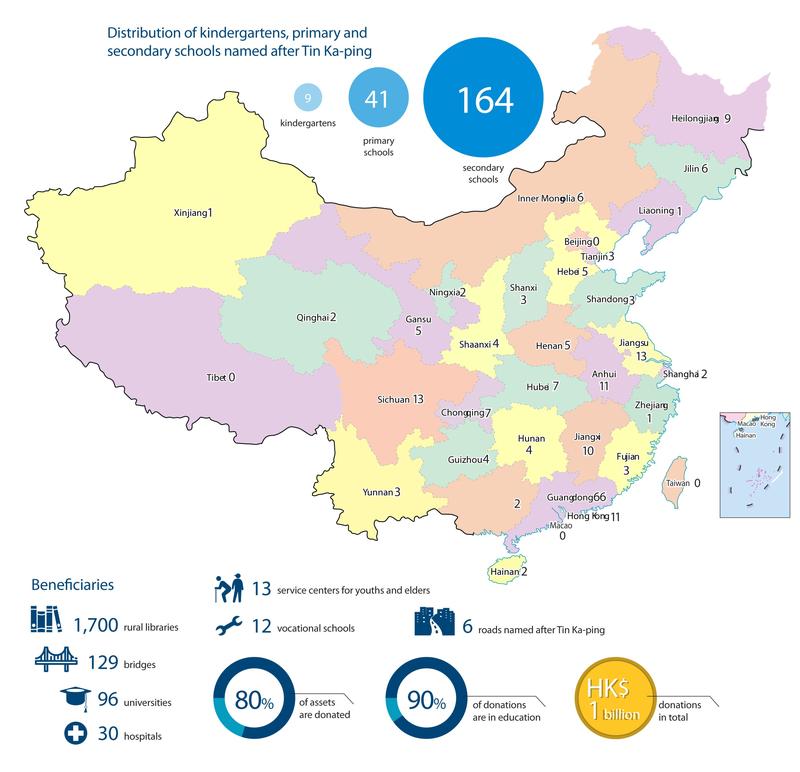 “I did think it (the villa) was a waste of money,” Tin explained in his autobiography.

Tin sold his villa at a time when the Tin Ka Ping Foundation he had founded in 1982 ran into financial straits — a cash shortage. That didn’t stop Tin. In 2004, he got a HK$6-million bank loan on his property and donated the money to City University of Hong Kong and Hong Kong Polytechnic University.

Chang Hsin-kang, former president of CityU, recalled Tin handing over a HK$5-million check in his office one day in 2004. Tin said he had applied for the loan under his own name because the foundation, at that time, was short of money.

“I was so moved that I didn’t know what to say and how to deal with the check from this honest elderly man,” Chang told the Chinese-language newspaper Ming Pao.

Tin’s foundation has sponsored hundreds of education projects not only in his hometown — Meizhou city of Guangdong province — but also across the country, including the Chinese mainland, Hong Kong, Macao and Taiwan.

Tin didn’t just contribute from a distance; he got right into school events, communicating with students, teachers and giving talks to do his best for the betterment of education and society as a whole.

In 2009, when he was 90, Tin went to Guangzhou, the capital city of Guangdong, and presented two-hour lectures at Jinan University and South China Agricultural University (SCAU).

At SCAU, students called him “Grandpa Tin”. In his address, he encouraged students to live a meaningful and fulfilled life with anecdotes from his own experience.

One of those who attended the lecture, a blogger calling himself Feiyu, recalled that the philanthropist patiently gave detailed answers to more than 10 students’ questions about life, career and family after the lecture.

The blogger went on, saying that Tin spent much time communicating with the students and they repaid him with their deep respect.

The virtue of the simple life

While giving away over HK$1 billion to support education in China, the late Tin Ka-ping led a simple life.

He had seen hardship. In his hometown of Yintan village, Meizhou city of Guangdong province, he’d seen farmers at hard labor planting rice so that he never wasted food and he taught that principle to his sons and daughters.

Tin and his wife spent less than HK$3,000 a month on food and other necessities. He seldom went out in his later life and when he did, he took the MTR.

Tin’s eldest son Tin Hing-sin said he seldom saw his father buy new clothes or accessories unless the old ones were worn out. His eldest daughter Tin Suk-fong said that, when traveling, her father finished every bottle of water, and took his own soap. He said he didn’t want to waste disposable soaps in the hotels.

While Tin Ka-ping lived a frugal life, he was generous in helping others. According to the childhood memories of his sons and daughters, their house in Hong Kong was like a “hotel”, as their father’s relatives or friends from the Chinese mainland or overseas would often lodge there. When there wasn’t enough room, Tin’s family would allow guests to sleep in their bed while family members slept on the living room floor.

Tin Ka-ping’s third daughter, Tin Sok-lin, recalled the brother of one of her schoolmates asked if her father could help him go to the United States to complete his education. Tin Ka-ping immediately agreed — and when the young man offered to write a receipt, Tin told him not to bother and that all he wanted in return was for him to succeed.

Tin was especially generous toward educational causes, but he didn’t stop there. What he had done bridged the road of success for children in seeking education. He also devoted himself and his resources to constructing roads, bridges, school libraries, as well centers for the elderly and youths. There are six roads named after him.

Chinese people always say, “happiness lies in contentment”, but only a few can find contentment in what they have. Tin Ka-ping was one of the few. Although he achieved success in business and earned a fortune, he never lived in luxury, but remained content with a simple life. He took the old Chinese saying “frugality cultivates virtues” as his motto, and lived by it faithfully all his life.

The title of Tin Ka-ping’s autobiography is My Happy Life. Being thrifty was one of his secrets for achieving happiness.