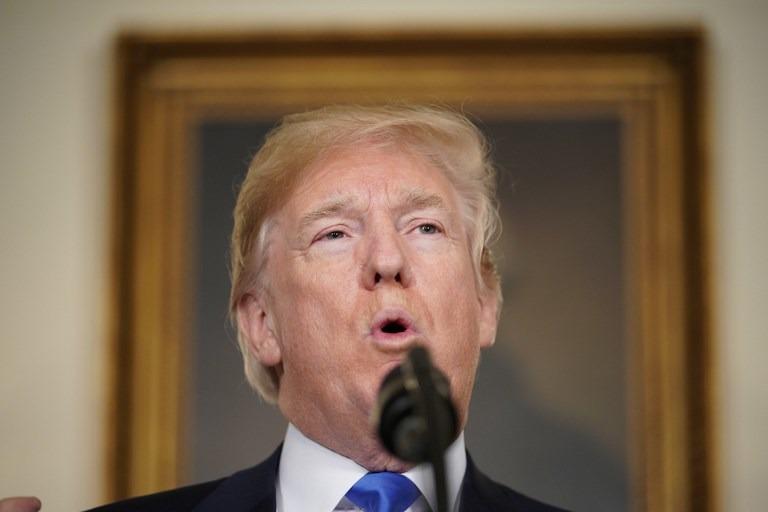 US President Donald Trump speaks before signing trade sanctions against China on March 22, 2018, in the Diplomatic Reception Room of the White House in Washington, DC. The US President has authorized that the European Union, Australia, Argentina, Brazil, South Korea, Canada and Mexico will get initial exemptions from looming steel and aluminum tariffs from the Trump administration. (MANDEL NGAN / AFP)

WASHINGTON/BERLIN/BRUSSELS - US President Donald Trump approved on Thursday the suspension of the much criticized tariffs on steel and aluminum imports for the European Union (EU) and six other countries.

The White House said that tariffs on steel and aluminum imports from EU member states, Argentina, Australia, Brazil, Canada, Mexico and South Korea are suspended until May 1, 2018.

"Each of these countries has an important security relationship with the United States," a proclamation from the president said.

These suspensions are based on factors including ongoing discussions, according to the White House. Trump will decide whether to continue to exempt these countries from the tariffs after the deadline.

EU leaders called on Friday for the temporary exemption from US tariffs on steel and aluminium to be made permanent, while cautiously welcoming US President Donald Trump's decision not to impose them on Europe for now.

"I'm pleased they've announced a temporary exemption for the EU. What I will be working with my fellow EU leaders today is to see how we can secure a permanent exemption for the EU for those steel tariffs," British Prime Minister Theresa May told reporters as she arrived at a summit of EU leaders in Brussels.

The suspensions are based on factors including ongoing discussions, according to the White House

"Let's not fuel the fantasy that we will re-open a global renegotiation of the kind of the transatlantic treaty from here (either)," he said.

An EU official said all the leaders at the summit were calling for a permanent exemption as they began their discussions on trade.

European leaders have said they want to avert a trade war with the United States, but Belgium Prime Minister Charles Michel underlined an irritation at Trump's negotiating tactics.

"I have the impression that the US leader wants to negotiate with the European Union by putting a revolver to our temple," Michel said as he arrived at the EU summit. "That's not a very loyal way to go about negotiations."

Amid widespread dissent in business groups and trading partners around the world, Trump signed proclamations to impose tariffs of 25 percent on imported steel and 10 percent on aluminum, which take effect on Friday.

The official announcement followed US Trade Representative Robert Lighthizer's suggestion earlier on Thursday that those economies be exempted.

Lighthizer told the Senate Finance Committee that there are countries involved in various stages of trade talks with the United States and that the president decided "to pause the imposition of tariffs with respect to those countries."

Since the proposal of the tariffs, many economies have warned Washington that they will retaliate if they are faced with tariffs on metals products.

The EU has proposed that, if tariffs are eventually imposed, the bloc should challenge them at the World Trade Organization, consider measures to prevent metal flooding into Europe and impose import duties on US products to "rebalance" EU-US trade.

The exemption from tariffs followed EU Trade Commissioner Cecilia Malmstrom's trip to Washington for talks with Lighthizer and US Commerce Secretary Wilbur Ross.

During his presidential campaign, Trump promised to bring down the country's trade deficit, which totaled US$566 billion in 2017.

However, economists say that the tariffs are unlikely to bring the US current account in balance as the major cause of the trade imbalance lies in the fact that the US savings are low relative to investment.