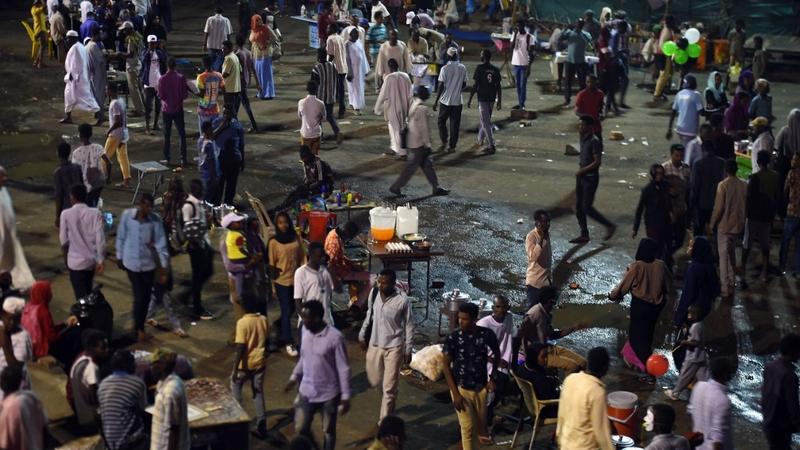 Sudanese protesters rally outside the army headquarters in Khartoum on May 9, 2019 (MOHAMED EL-SHAHED / AFP)

DUBAI - After spearheading the rallies that toppled former President Omar al-Bashir, Sudan's main protest group is now locked in a stand-off with the country's new military rulers that is testing its clout as a political force.

If (the council) insists on holding on to power, we are going to consider this a military coup, and we will escalate our tactics, peacefully

The Sudanese Professionals Association (SPA) gained widespread support during more than four months of protests and it has helped win a string of apparent concessions from the military council that took over from Bashir on April 11.

But as the unionists and activists in the SPA try to chart a course to full-fledged democracy, they are coming up against a powerful rival that has shown little sign yet that it is willing to move aside for a civilian-led transition.

Frustrated by a lack of progress, the Declaration of Freedom and Change Forces (DFCF), a broad coalition of opposition groups headed by the SPA, called on Wednesday for a campaign of civil disobedience to crank up the pressure on the military.

"We have all options open from now on," Ahmed Rabie, an influential SPA member, told Reuters. "If (the council) insists on holding on to power, we are going to consider this a military coup, and we will escalate our tactics, peacefully."

The SPA has said such a campaign would likely focus on mass strikes, which have been successful in previous uprisings in post-independence Sudan. Strikes called by the SPA before Bashir's fall met with limited success, but workers may be less cowed following his removal.

It may also call for a boycott of non-essential goods and public services in a bid to starve the government of tax revenue, and intensify rallies and sit-ins across Sudan.

The biggest ongoing sit-in, which began on April 6 outside the Defence Ministry in Khartoum, has become the focal point of the uprising.

The Transitional Military Council (TMC) has said it will not use force to end the sit-in. But the SPA could be undermined by manoeuvring due to its lack of political experience.

"The politicking is starting. This is a terrain that the professionals association might not be as well-equipped for as it seems," said Sudanese analyst Magdi el-Gizouli.

To try to placate protesters the TMC replaced its first head after one day, dismissed senior allies of Bashir, announced anti-corruption measures and moved to restructure security and intelligence agencies.

Bashir, who is wanted by the International Criminal Court (ICC) for alleged war crimes in Darfur, is in prison in the capital Khartoum.

But while the DFCF wants a transitional body led by civilians to steer a four-year transition, the TMC has indicated that it wants to retain overall control of any joint military and civilian sovereign council.

As talks between the two sides have dragged on, the SPA has accused the military leaders of expanding their powers.

The TMC has said it is open to more dialogue and that elections could be held after six months if there's no agreement on an interim government - well ahead of the end of the council's planned two-year The SPA's civil disobedience could put pressure on the military council given Sudan's economic vulnerability. The country is already suffering from spiralling inflation and shortages of cash and basic goods.

But its rivals in the TMC have powerful and wealthy backers.

The TMC's leaders, Lieutenant General Abdel Fattah al-Burhan and General Mohamed Hamdan Dagalo, have ties to Saudi Arabia and the United Arab Emirates, which together promised Sudan $3 billion to support the central bank and provide fuel, wheat and medicine.

Dagalo, commonly known as Hemedti, controls the feared Rapid Support Forces, which fought in Darfur and are participating in the Saudi-led coalition in Yemen. They are also deployed across Khartoum.

"This is an army establishment and they don't want to lose control," said Sudanese writer and commentator Reem Abbas. "There's a lot of things at stake: resources, land, immunity for war crimes."

The SPA, by contrast, was formed in 2016 from unofficial parallel trade unions outside the state apparatus representing doctors, lawyers, journalists and other professions.

It was campaigning for higher wages when demonstrations against Bashir, triggered by a deepening economic crisis, spread across Sudan from Dec. 19 and propelled the SPA into the role of protest coordinator. It has since expanded to include more than 20 unions.

The SPA's non-political image was key to its success in ousting Bashir after three decades in power, said Rabie, a high school physics teacher from the Haj Yousif neighbourhood on the outskirts of Khartoum.

Despite its large following, the SPA says it will not become a political party. It has no leader or strict hierarchy and, until recently, operated largely underground.

That could leave a vacuum.

Under Bashir, opposition parties' activities were limited and membership dwindled. Analysts say they still have much work to do to become effective political forces.

The opposition also faces a challenge presenting a united front. The DFCF is made up of a wide range of political parties, civil society associations and armed groups from across Sudan and they have already made conflicting statements about their approach to the negotiations.

Many protesters believe the SPA shouldn't be negotiating with the military at all, chanting: "Civilian rule is the decision of the people." The SPA has sought to reassure them, saying it will act as a guarantor of the revolution and democracy during the transition.

"We always work hard to get democracy in this country and then we lose it," said Rabie, who was jailed from Jan. 4 until shortly after Bashir's downfall. "We worked hard to get it, and, God willing, we can protect it."