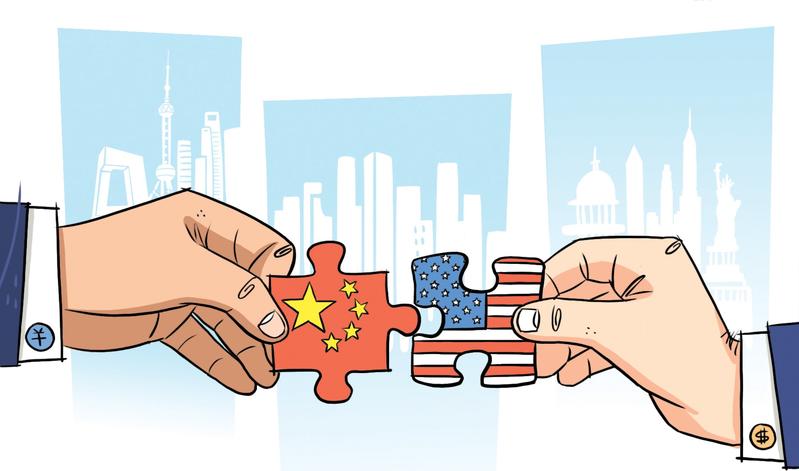 According to the white paper titled "The Facts and China's Position on China-US Trade Friction," the current US administration, in its Section 301 report and other ways, stigmatizes China by accusing it of "economic aggression," "unfair trade," "intellectual property rights (IPR) theft" and "national capitalism."

"It is a gross distortion of the facts in China-US trade and economic cooperation. It turns a blind eye to the huge progress in China's reform and opening-up as well as the dedication and hard work of the Chinese people," the white paper said.

It (US administration’s Section 301 report) turns a blind eye to the huge progress in China's reform and opening-up as well as the dedication and hard work of the Chinese people.

The Facts and China's Position on China-US Trade Friction

"This is disrespectful to the Chinese government and people as well as incompatible with the real interests of the American people. It will only aggravate differences and tensions, which in the end will damage the fundamental interests of both countries," the white paper added.

The white paper clarified six key facts about China-US trade and economic relations. They are: the gap in trade in goods alone is not a good indicator of China-US trade and economic relations; the discussion of fair trade should not be detached from the principle of mutual benefit of the World Trade Organization (WTO); the accusation that China forces technology transfer is against the spirit of contract; China's huge efforts and achievements with regard to IPR protection should not be dismissed; the Chinese government's encouragement to Chinese business to go global should not be distorted as a government attempt to acquire advanced technologies through commercial mergers and acquisitions; China's subsidy policy complies with WTO rules and should not be attacked.

In today's world of greater globalization and widespread international production, bilateral trade and economic cooperation already extend beyond trade in goods, according to the white paper.

"If we give full consideration to these three factors – trade in goods, trade in services, and sales of local subsidiaries in the host country, trade and economic cooperation delivers balanced benefits in general for China and the United States, with the latter reaping more net benefits," the white paper reads.

The mutual benefit principle advocated by the WTO means overall reciprocity and balance of interests in market opening across all the industries of the members, it said. "This is genuine global fairness."

Economic and trade relations have developed steadily since the establishment of diplomatic ties between China and the US, with fruitful results achieved in trade and investment, according to the white paper.

"Cooperation serves the interests of the two sides and conflict can only hurt both... China-US trade and economic cooperation is a win-win relationship and by no means a zero-sum game," said the white paper titled "The Facts and China's Position on China-US Trade Friction."

China and the US are important partners for each other in trade in goods, with two-way trade in goods having grown rapidly, it added.

China's attitude towards IPR protection is clear and firm, the white paper said. "It has continued to reinforce protection through legislation, law enforcement and the judiciary, and achieved some notable successes."

China's attitude toward IPR is clear and firm, it said, adding that the country has continued to reinforce protection through legislation, law enforcement and the judiciary, and achieved some notable successes.

"China built a fully-fledged and high-standard IP legal framework in a relatively short period, compared to the decades or more that developed countries spent setting up similar legal systems."

The protectionist policies of the US government severely affect the normal development of China-US economic and trade relations, said the white paper.

There are numerous investment and trade restriction policies and actions adopted by the US that distort market competition, hamper fair trade, and lead to breakdowns in global industrial chains. They are detrimental to the rules-based multilateral trading system and severely affect the normal development of China-US economic and trade relations, according to the white paper.

Many American regulatory policies are clearly self-serving and protectionist, as they run counter to the principle of fair competition and discriminate against foreign products.

The United States directly or indirectly restricts the purchase of products from other countries through legislation, subjecting foreign companies to unfair treatment in the USs, with Chinese companies being the main victims.

The white paper said the US abuses "National Security Review" as a way to obstruct the normal investment activities of Chinese companies in the country.

The US has resorted to a huge number of trade remedy measures to protect its domestic industries, with many of these measures targeting China, said the white paper.

Moreover, the US picks surrogate countries rather randomly, making the results of anti-dumping investigations highly unfair and discriminatory for Chinese exporters.

The US’ trade bullying practices have shaken the foundations of the global multilateral trading regime, which will ultimately hurt its long-term interests, according to the white paper.

The new US administration has practiced unilateralism and economic hegemony with a narrow focus on "America First" since taking office, said the white paper. This has not only undermined the interests of China and other countries, but also jeopardized the international reputation of the US itself, it added.

The US unilaterally provokes trade friction on the pretext of its domestic law, said the white paper.

PROTECTIONISM TO ULTIMATELY HURT US

The US government has taken extreme trade protectionist measures, which have undermined the international economic order, according to the white paper.

Trade protectionism will ultimately hurt US interests, it added.

"Thanks to economic globalization, economies, particularly the larger ones, are highly interdependent. Ultimately, trade wars unilaterally initiated by the US administration will not only hurt other economies but also undermine US interests," it reads.

The white paper said trade protectionism will push up manufacturing costs and affect American jobs. It cited a report by the Peterson Institute for International Economics (PIIE) which contended that since 95 percent of the Chinese products hit by higher tariffs are parts and electronic components used in end products made in the US, raising tariffs on these Chinese products will only damage US businesses.