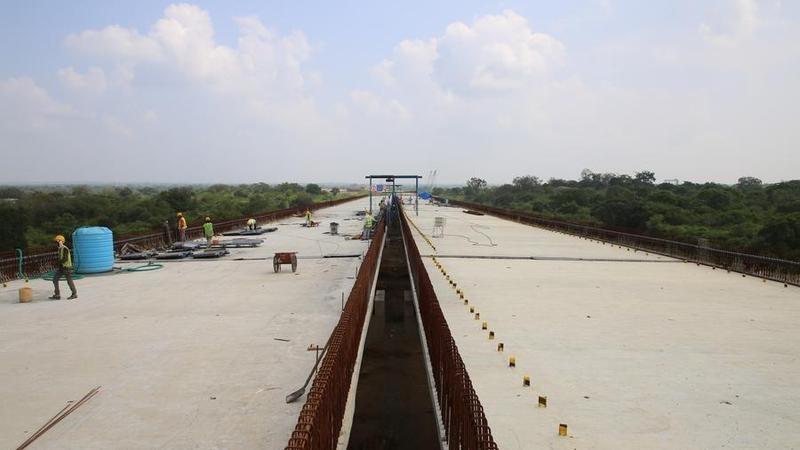 This Dec 15, 2017 photo shows part of the expressway located north of the Hambantota port in Sri Lanka. (ZHU RUIQING / XINHUA)

BEIJING – China and Sri Lanka are committed to pushing forward cooperation on the Hambantota port project and realizing the goal of making Sri Lanka the logistics center of the Indian Ocean, a Foreign Ministry spokesperson said on Tuesday.

If the fabricators of the so-called 'debt trap' cannot give the developing countries real help, they can at least take a healthy attitude towards the sincere cooperation between other countries.

"This is not only conducive to the economic development of Sri Lanka, but also conducive to regional interconnection and the common prosperity of regional countries," Lu Kang said at a press briefing.

Lu made the remarks in response to allegations that appeared in US media reports, which stated that China's acquisition of the Hambantota port from Sri Lanka highlights its "debt trap" and ambitious use of loans to gain influence around the world.

Lu said such reports seriously distort the facts, which are either irresponsible or under the orders of people with ulterior motives, "We hope that the relevant media will not be keen on fake news."

The construction of the Hambantota port is the wish of successive governments and people of Sri Lanka, said Lu.

China encourages its companies to cooperate with the Sri Lankan side according to commercial principles and on the basis of equality and mutual benefit, he added.

"According to the needs of Sri Lanka, Chinese financial institutions have provided support to Sri Lanka in solving the financing gap. Later, the Chinese side made efforts to adjust relevant asset allocation according to the wishes of the Sri Lankan side," said Lu, noting that those arrangements will benefit the business cooperation between the two sides.

"If the fabricators of the so-called 'debt trap' cannot give the developing countries real help, they can at least take a healthy attitude towards the sincere cooperation between other countries," said Lu.