Leaping through the past 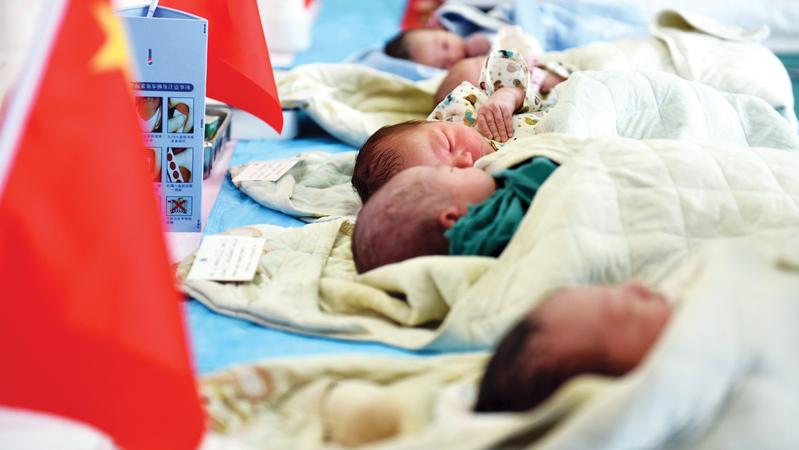 Newborn infants at a hospital in East China’s Anhui province on Oct 1 last year. In 1982 the Chinese population became the first to top the billion mark. (PHOTO / IMAGINECHINA)

Dog years have proven to be particularly significant for modern media — from China’s first TV broadcast and first Internet connection, to the establishment of China Unicom and the China Central Television CCTV New Year’s Gala program.

And this imminent Year of the Dog promises to be one for the books.

Coming off a year of economic growth that exceeded expectations and stronger bonds with neighboring countries due to the rapidly growing Belt and Road Initiative — the drive to improve connectivity along the historical Silk Road trading routes — China is entering a year of great opportunity and not a few challenges.

A look at past years of the dog — the 11th animal in the Chinese zodiac — provides a glimpse of what may be in store for the Year of the Earth Dog, which begins on Feb 16 and ends on Feb 4, 2019.

The Year of the Fire Dog in 2006 was definitely a hot one. China experienced its warmest year on record since 1951, though new highs have been set since. The country was faced with a series of deadly natural disasters that took the lives of 3,186 people.

New connections in Southwest China’s Tibet autonomous region were a theme in 2006. Tibet became the final province-level entity in China to be linked to the rest of the country through a conventional railway with the trial run of the Qinghai-Tibet Railway, one of the great modern works of transport engineering.

The year also marked the launch of an official study on a China-Republic of Korea Free Trade Area.

The interest to trade more with China came as the country’s economy grew by 10.7 percent in 2006, the fastest pace in more than a decade even amid growing signs of inflation.

On the digital front, Baidu Baike was launched. This is China’s own collaborative cyber-encyclopedia.

After a difficult period, global stock markets staged a huge rebound toward the end of the year. This was led by the Dow Jones Industrial Average which topped the 12,000 mark for the first time.

Average oil prices also hit historic highs, with West Texas Intermediate averaging around US$66 per barrel for the year, part of a climb that would only end with the global financial crisis two years later.

The year marked the beginnings of digital China, as the country established its first online connection and officially joined the Internet. That was the result of a joint effort between the Institute of High Energy Physics in Beijing and Stanford University’s Stanford Linear Accelerator Center.

It was aimed at improving communications between physicists in China and the United States, who were working collaboratively on the Beijing Electron Spectrometer, a type of particle accelerator.

Another major player on the cyber frontier, China Unicom, was established in 1994. The State-owned mobile service provider is currently the world’s fourth largest by subscriber base.

This was also the year that relations warmed between Russia and China, as both agreed to de-target their nuclear weapons against each other.

Construction began on the Three Gorges Dam that spans the Yangtze River. Operations at the high-profile project began in 2012. It is the world’s largest power station in terms of installed capacity at 22,500 megawatts and is considered a monumental landmark in Chinese economic history. The dam generated a record-breaking 98.8 terawatt-hours of energy in 2014.

China made a splash in the Year of the Water Dog 1982 when it announced to the world its population had exceeded 1 billion. The report made by the National Bureau of Statistics put China’s population at around 1,000,868,900 in mid-1982, which made it the first country to top the billion mark.

This year was also when the People’s Republic of China adopted its current Constitution.

The first ever CCTV New Year’s Gala program was held, marking the beginning of an annual tradition that has spread across the country. The popular annual program is now watched by around 1.1 billion viewers every year.

More significantly, the last of the Three Joint Communiques arrived in 1982 following those in 1972 and 1979. The collection of joint statements by the US and Chinese governments reaffirmed ties between the two countries and played a crucial role in improving relations. It continues to be a guiding element in discussions between the two superpowers.

The Chinese economy also put on a strong performance during the year, growing at 9 percent amid one of the most prolonged periods of economic expansion in history.

The Year of the Metal Dog 1970 saw some exciting adventures in space. While the US’ Apollo 13 landed safely back on Earth after an aborted lunar landing, China launched its first satellite (Dong Fang Hong 1) into orbit using a Long March-1 Rocket (CZ-1).

This was also the year that Canada and the People’s Republic of China established diplomatic relations. Then prime minister Pierre Trudeau was one of the first Western leaders to recognize the People’s Republic of China. His son, current Prime Minister Justin Trudeau, was in China recently to discuss trade as the Canadian government mulls a ‘progressive trade agenda’ and a push to improve bilateral relations with China.

The last time the Year of the Earth Dog came around was in 1958. The year marked the beginning of the European Economic Community, which sought to bring about stronger economic integration in the European region. The organization would later be absorbed into the European Union, formed in 1993.

The year was also significant for China as it brought about its first television broadcasts. September saw the launch of Beijing Television Station, a predecessor of the modern-day CCTV.

Today, Chinese television continues to grow nationally and internationally, with increasing presence abroad. CCTV-4, the station’s international channel, signed a strategic cooperation agreement with Internet giant APUS Group in May last year. The move is aimed at bringing more of CCTV’s programs to a global audience.

The year also saw the beginning of the Four Pests Campaign in China to eliminate rats, flies, mosquitoes and sparrows.

The Year of the Dog 1946 was a fairly significant one for the world, coming on the heels of the end of World War II just a few months earlier.

A year of transition, it was marked by the end of the League of Nations and the beginning of operations of the United Nations. The formal founding of the People’s Republic of China in 1949 would see the emergence of a key participant into this new world body.

Back then, China’s factories were recovering from the effects of WWII, operating at 20 percent capacity and around one-fourth of pre-war output.

Also, the Shanghai Stock Exchange resumed operations, after closing in 1941 due to the war.