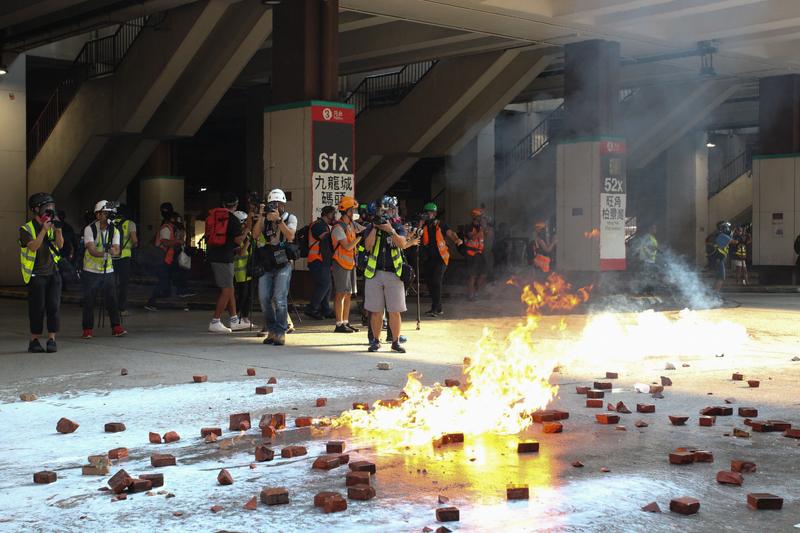 After more than 100 days of chaos, many of the original reasons and excuses of the demonstrators in Hong Kong no longer hold water. The truth has gradually emerged and the nature of the chaos has become increasingly clear.

If the demonstrators were protesting against just the planned amendment to the extradition law of the Hong Kong Special Administrative Region, their aim was achieved almost three months ago.

So why did they prolong the demonstrations, turning it from one of “peace, reason and nonviolence” to mayhem? Perhaps the organizers and supporters of the violent demonstrations had other schemes in mind from the very beginning.

Past protests in Hong Kong were largely peaceful, and ended when the purpose was met. But the on-going demonstrations have lasted more than 100 days, and it seems the demonstrations will not stop until the insurrectionists realize the ultimate goal of destabilizing the SAR and destroying its economy, and in the process destabilize the country and check its development.

The most urgent task now is to end the violence and restore order. It has become clear that the turbulence in Hong Kong is neither about freedom and democracy nor about human rights. Nor is it about the Hong Kong SAR government cracking down on people’s rights and freedom.

In essence, it is naked violence, and gross distortion and abuse of human rights and freedom, given that some of the violent acts of the radical demonstrators have crossed the bottom line of civil morality and rule of law. Yet some foreign media outlets are painting a different picture to smear the SAR and China.

To end the on-going violence, we have to rely on the Hong Kong police force. The Hong Kong police, on their part, have to enforce the law professionally, effectively and strictly, and use appropriate means to end the violence and chaos and defend the law.

While supporting the police to take practical and effective measures to strictly enforce the law, we also expect Hong Kong residents to make efforts to end the violence and restore order. Expecting the Hong Kong government and the police alone to restore social order would be akin to asking for the sky, for no society can maintain peace and order without the active support of the people.

Hong Kong residents have suffered a lot, and they all want the violence to end, and law and order to be restored as soon as possible. A society gets its strength from the public, and it is time Hong Kong residents ceased to be passive onlookers and instead made efforts to protect their city and country.

As for Chinese compatriots on the Chinese mainland and overseas, especially netizens, they should control their emotions, and refrain from doing anything that would make antagonist foreign forces happy and increase the pain of the Chinese people, because by so doing they would deal another blow to Hong Kong residents. In the past, whenever the country faced trouble, Hong Kong compatriots were the first to extend a hand, and we will never forget their huge contributions.

The chaos in the SAR has pained all Chinese. No country loves the SAR, expects it to further prosper and wants its residents to live and work in peace under the “one country, two systems” more than China. Some vested interests and foreign forces cannot bear to see the Chinese people prosper, so they are trying to create differences between the mainland and Hong Kong.

We have to be alert and avoid falling into the trap set by the evil forces, and should help Hong Kong residents solve their problems. More important, we should not allow the on-going demonstrations to change our attitude toward our Hong Kong compatriots and lose confidence in their ability to overcome all odds. The Chinese nation has survived many a severe test in its 5,000-year history, and it is confident that Hong Kong compatriots will overcome the present exigency.

The turmoil Hong Kong is facing is a challenge to the rule of law. If violence damages the social order beyond repair, Hong Kong as well as the country would suffer.

Of course, the recent happenings, including the violent demonstrations, in Hong Kong should prompt us to analyze the problems and shortcomings in the implementation of “one country, two systems” and take effective measures to ensure it is implemented both in letter and spirit so as to guarantee its steady and sustained development.

The author is director of Center for Hong Kong and Macao Research, Tsinghua University.