Iran says it will break uranium stockpile limit in 10 days

TEHRAN, Iran — Iran will break the uranium stockpile limit set by Tehran's nuclear deal with world powers in the next 10 days, the spokesman for the country's atomic agency said Monday while also warning that Iran has the need for uranium enriched up to 20%, just a step away from weapons-grade levels.

Under the 2015 nuclear deal, Iran accepted to stockpile low-grade enriched uranium by 300 kg

The announcement indicated Iran's determination to break from the landmark 2015 accord, which has steadily unraveled since the Trump administration pulled America out of the deal last year and re-imposed tough economic sanctions on Iran, sending its economy into freefall.

The spokesman for Iran's nuclear agency, Behrouz Kamalvandi, made the announcement during a press conference with local journalists at Iran's Arak heavy water facility that was carried live on Iranian state television.

The Atomic Energy Organization of Iran (AEOI) announced on Monday that Tehran has increased the speed of low-grade uranium enrichment four times since it announced it would stop complying with parts of nuke deal last month.

"We will cross (limit of) 300 kg (for the production of low-grade enriched uranium) by June 27," Kamalvandi told reporters on Monday.

The pace of enrichment will even be faster after that, he said.

Under the 2015 nuclear deal, Iran accepted to stockpile low-grade enriched uranium by 300 kg.

The development comes in the wake of suspected attacks on oil tankers last week in the region, attacks that Washington has blamed on Iran, and also as tensions have spiked between Iran and the United States, a year after US President Donald Trump unilaterally withdrew America for the nuclear deal.

Israeli Prime Minister Benjamin Netanyahu said the international community should reinstate sanctions if Iran follows through on its threats to step up uranium enrichment.

Netanyahu, speaking at a government ceremony Monday called for the immediate imposition of "snapback sanctions" if Iran breaks the stockpile limits set in the 2015 nuclear deal.

He added: "In any case, Israel will not allow Iran to obtain nuclear weapons." 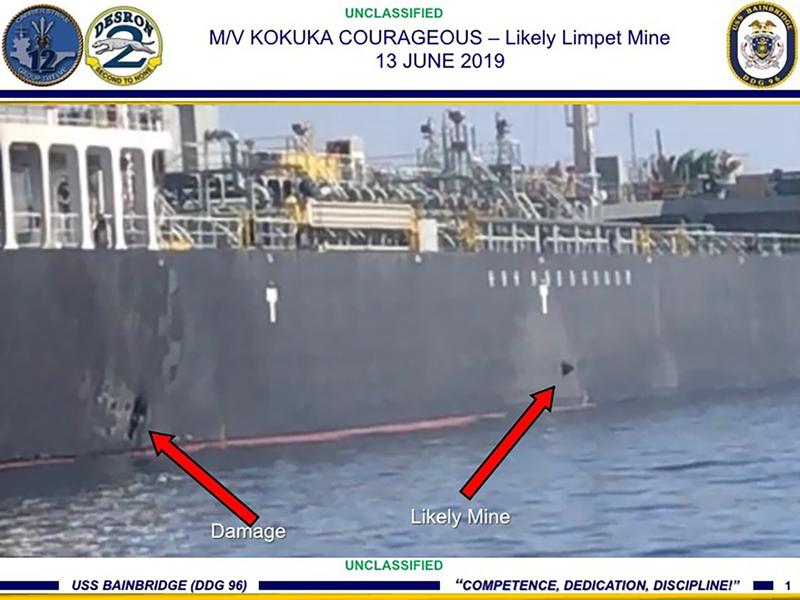 This June 13, 2019, image released by the US military's Central Command, shows damage and a suspected mine on the Kokuka Courageous in the Gulf of Oman near the coast of Iran. (US CENTRAL COMMAND / AP)

Kamalvandi acknowledged that the country already quadrupled its production of low-enriched uranium and said Tehran would increase uranium enrichment levels "based on the country's needs."

That increase could be to any level, from 3.67% which is the current limit set by the nuclear deal.

Iran's needs 5% enrichment for its nuclear power plant in southern Iranian port of Bushehr and it also needs 20% enrichment for a Tehran research reactor, the spokesman said.

That means going from 20% to 90% is a relatively quicker process, something that worries nuclear nonproliferation experts.

The secretary of Iran's Supreme National Security Council, Ali Shamkhani, was quoted as saying by the state broadcaster IRIB that several CIA agents were arrested after Tehran shared intelligence with its allies.